Talent comes in all shapes and sizes. The Providence Academy upper school is no exception. The upper school has an immense amount of talent, and it really shows. The number of unique talents in the upper school are countless.

She may only be in ninth grade, but there is no denying the talents of Mae Monette on the trumpet. She is the only ninth-grade first chair trumpet. She has been in an all-state honor band two years in a row, and she also played “Taps” at the school’s 9-11 memorial last year.

Monette started playing the trumpet halfway through fourth grade. “They had us try out instruments to see what we were good at, and I guess the trumpet was a good fit for me,” she recalls.

Monette has been playing trumpet ever since, eagerly rising to the challenge of playing in a high school band. She credits her fellow first trumpets for teaching her their ways. “They’re all older than I am, so it’s a good experience to learn from them,” she stated.

The ninth grade class has a large number of interesting talents. Some of them, like Mae’s, are things that you can see everyday at PA. Others are a little more unique.”Pogo sticking is great because you get exercise, but you’re also having fun at the same time,” stated Ava Vetter, ’21.

Vetter started pogo sticking at a friend’s house in seventh grade, and caught on fast. “I got a pogo stick from my aunt that Christmas,” Ava recalls. Her ultimate high score is three hundred and six bounces on the pogo stick. “That’s even more than my dad,” Vetter announced proudly.

Sometimes talents bring out another side of a person that even they didn’t know were possible. “Martial arts are great because you can use your body in ways you didn’t think you could,” Paris Edwards (’17) explains.

Paris started karate when she was seven and she did it until the age of fourteen. During that time, she achieved the rank of double black belt. She participated in events such as sparring, weapon forms, and open-hand forms. She has experience with weapons such as bo-staff, nunchucks, and kammas. Paris also took part in several tournaments, and even placed fifth in a competition.

She was a bird girl in last year’s production of Seussical, but that’s not all. Instead of a triple threat, she’s a quadruple threat with her singing in the Academy Chorale as well as Bella Canta, Chamber Choir, and Show Choir. An officer for the theatre council and a participant in many coffeehouses, Maddy Young ’20 is definitely a versatile singer. She has been singing as long as she can remember. “I don’t remember being in any choirs when I was younger, but I feel like I’ve been singing forever,” she explained.

Young has been a part of choir ever since she started at PA, and she now sings Soprano I in the Academy Chorale and Chamber Choir. She enjoys the choirs’ atmospheres and how close everyone in the choirs get. “We’re all like family,” Maddy stated.

One thing that all of these ladies had in common was their encouragement of other students to let their talents shine. Whether it’s singing or pogo-sticking, everyone deserves to have their talents recognized and appreciated. No one deserves to be told that they are insignificant or that their talent is too small. “A person’s a person, no matter how small,” Horton the elephant wisely remarks in Horton Hears a Who. The same is true with talents. Everyone deserves a moment to shine and everyone deserves to feel like they are important and that they are worthy of other people’s praise. In the first letter of Peter, Peter writes “Each of you should use whatever gift you have received to serve others, as faithful stewards of God’s grace in its various forms” (1 Peter 4:10). It is through our talents and the talents of others that our world becomes a better place. 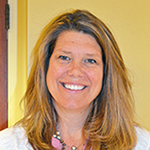 Just past the chapel,  on the far end of one of the third floor hallways, a bright, friendly second grade classroom is visible. Outside the classroom, you’ll find a carefully hand-drawn picture of every second grader taped neatly on the outside of their lockers. Inside the classroom, a group of eager second graders sat on a navy blue rug and listened intently to the daily math lesson presented by their teacher, Mrs. Karen Dierberger. Mrs. Dierberger is no stranger to teaching, but she is a new face here at Providence.

Mrs Dierberger wanted to start teaching ever since she was in second grade. She used to take notes on what her teachers did, and how she would do it differently.When she was old enough, Mrs. Dierberger attended Creighton University in Ohio, which is run by a Jesuit order.

Mrs. Dierberger briefly taught at a school in Brownsville, Texas.  After teaching for seven years in the Twin Cities area, Mrs. Dierberger came to Providence.

Mrs. Dierberger’s spontaneous and creative methods of teaching bring a new aspect to the second grade class, and her great care of maintaining good reading habits shows greatly from the reading charts on the wall as well as a small bookshelf carefully organized and generously filled to arouse a love of reading in the second graders. She also employs the use of clever methods such as “talk time”, an allotted amount of time where the second graders get to socialize, to help keep her students from getting too antsy during class.

“Mrs. Dierberger is a great teacher, and I am having a lot of fun in her class,” says David Fish, a second grader in Mrs. Dierberger’s class.