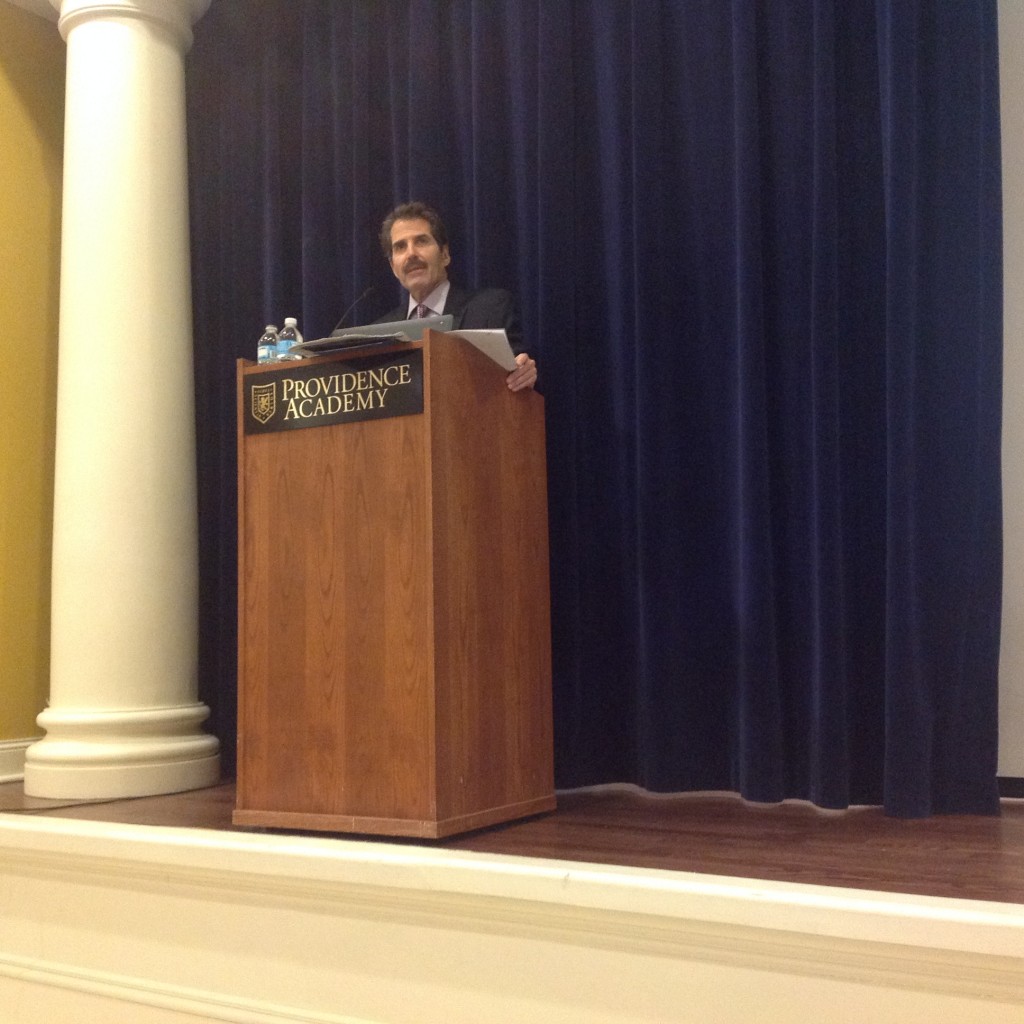 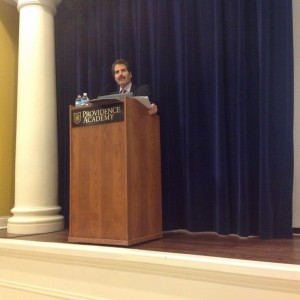 On April 22, Providence Academy hosted a guest speaker. John Stossel, journalist of ABC and Fox News fame, spoke to Upper School students and teachers that Tuesday afternoon on a topic he discusses frequently: the free market.

“In a free society, the way to get rich is to give your customers what they want,” said Stossel.

He believes fervently that “most of society works because of spontaneity,” adopting the economist Friedrich Hayek’s idea that a capitalist order is “the result of human action but not human design.”

To this end, Stossel is anti-government regulation; he is usually against bureaucracy that is meant to prevent illegal actions.

“You can’t stop cheating with a licensing bureau,” he said. Stossel, like some other libertarians, is a fan of writer Ayn Rand, known for her philosophy of pure capitalism, among other things.

During the Q&A, Jacob Sivo ’14 asked Stossel why more libertarians do not hold high office.

“People think it means libertine,” Stossel joked, but added that the two-party system makes third-party victory more difficult. Though the American libertarian faction ‘has grown, it’s still too small,” said Stossel.”When you ask kids your age which is better, socialism or capitalism? Socialism gets about half those kids.”

Stossel said he would love to switch to a more pure system of capitalism, although he acknowledged, “I realize it’s not gonna happen.”

He sees his role as an advocate for libertarian and free market ideals, even though he is pessimistic about their ultimate legal reality.

Stossel agreed with Thomas Jefferson that “the natural progress of things is for liberty to yield and government to gain ground.”

During his speech, Stossel recalled his old impression of capitalism before he became a conservative: “by and by it’s cruel.”  What may seem cruel, Stossel said, is what he thinks is a part of human nature.

“I don’t think everyone can suppress selfishness,” said Stossel. He argued that even people who appear selfless, such as Mother Theresa, “are doing it because it feels good.”

As academia and politics become increasingly intertwined, Stossel offered some advice to conservative students determined to hold on to their beliefs in college.

“And they will be liberal colleges, and people will be sneering at you,” said Stossel. For her beliefs, “my daughter…was drummed out of the [college] prison volunteer program.” Despite what Stossel says is a politically liberal environment, he would advise conservative students at college to do as he has done throughout his career on the right: “Speak up,” said Stossel. “Most of these students have never heard these ideas.”

Providence Academy got Stossel as a speaker at no cost to the school through a connection with the Young America’s Foundation, said Dr. Flanders. 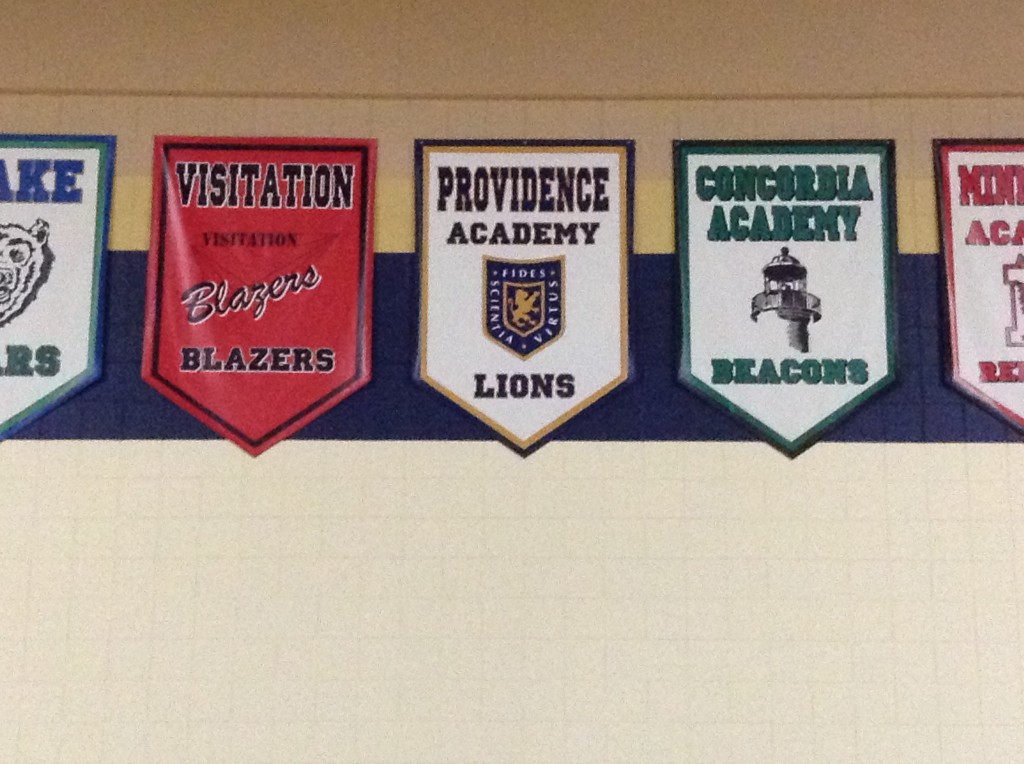 Providence Academy announced today that it will join Blake, Breck, Minnehaha Academy, Saint Paul Academy, and Mounds Park Academy in a new athletic conference, which will begin play in the fall.

Providence Academy announced in October 2013 that it would withdraw from the Tri-Metro Conference for the 2014-2015 school year. The conference’s size, which had grown to 16 to include three large schools next year, had been the major reason for pulling out of the conference, according to Mr. Kurt Jaeger, PA Athletic Director.

After the announcement, the PAW reported that PA would  be operating its sports teams independently, playing and advancing to state-level competition without a traditional conference schedule. Today, the six schools that simultaneously announced their departure from the Tri-Metro announced that they have joined to form the Independent Metro Athletic Conference (IMAC).

Despite no conference ties to the schools left in the Tri-Metro, PA will maintain an athletic relationship with many of them, competing against them in many sports.

“The schedules for next year are 95% done” for fall and winter sports, said Mr. Jaeger. “There’s a mix of folks from the existing Tri-Metro that we’ll continue to play.”

Mr. Jaeger said that he does not think Tri-Metro schools continue to harbor bitter feelings toward the IMAC schools for the decision.

“When we first pulled out, it wasn’t well-received by everybody,” he said. “I think they’ve moved on. I certainly hope this doesn’t cause anybody to have any ill-feeling.”

Mr. Jaeger explained the philosophy behind the IMAC.

“We’re well-suited for these schools because of size and academic focus,” he said. In the official April 14 press release, Mr. Jaeger said, “we will work closely together to achieve an appropriate balance with regard to athletic competition and athletics.”

Minnehaha’s Athletic Director, Homer Ramirez, stated, “Forming the IMAC provides a level of scheduling flexibility, as well as an opportunity to honor all student-athletes in an equitable manner.”

The smaller size, Mr. Jaeger, Mr. Ramirez, and their colleagues at the other four IMAC schools said, ensures a similar prioritizing of academics plus more chances for individual recognitions like All-Conference, due to the exclusion of vastly larger schools.

Mr. Jaeger brought up the importance of school enrollment in athletic matchups, saying, “If you know your team’s going to get killed, there’s not a lot of incentive for fans to come out and watch that.”

In the wake of what he said was uncertainty about going independent in the PA community, Mr. Jaeger anticipates that “there will be fewer questions and more relief.” 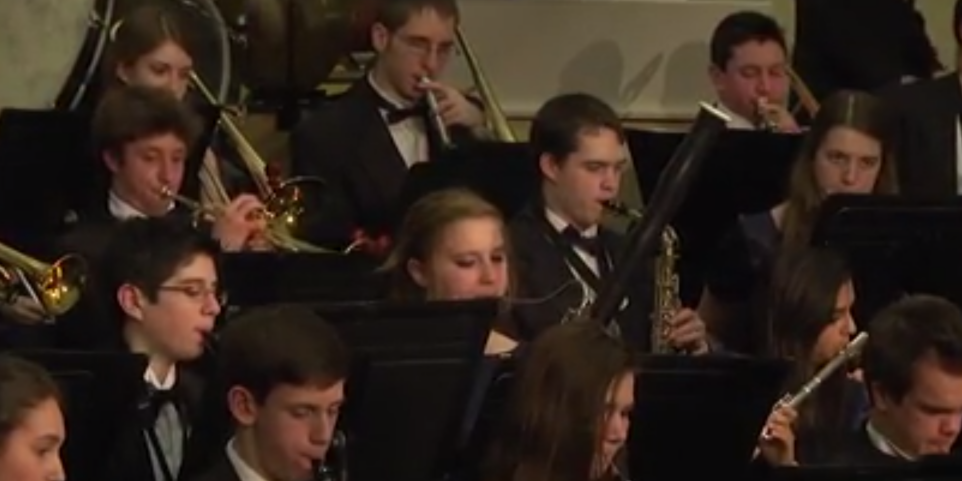 This week is an important one for members of Providence Academy’s three main musical groups–band, strings, and choir.

The Upper School Symphonic Band played for students and parents on Monday the 10th.

According to director of the Symphonic Band, Mr. Thomas Jones, the theme for the Upper School’s concert was “a general idea of music from different geographical areas  around the world.”

Mr. Jones said that despite the natural annual attrition of band members due to graduation, he does not expect the quality of the band to diminish.

“We should be able to continue a high level of musicianship and performance,” he said.

Of course, not all PA musicians were represented at the band concert. Strings also performed, on Tuesday, March 11:

The Academy Chorale’s concert was on Thursday, March 13: 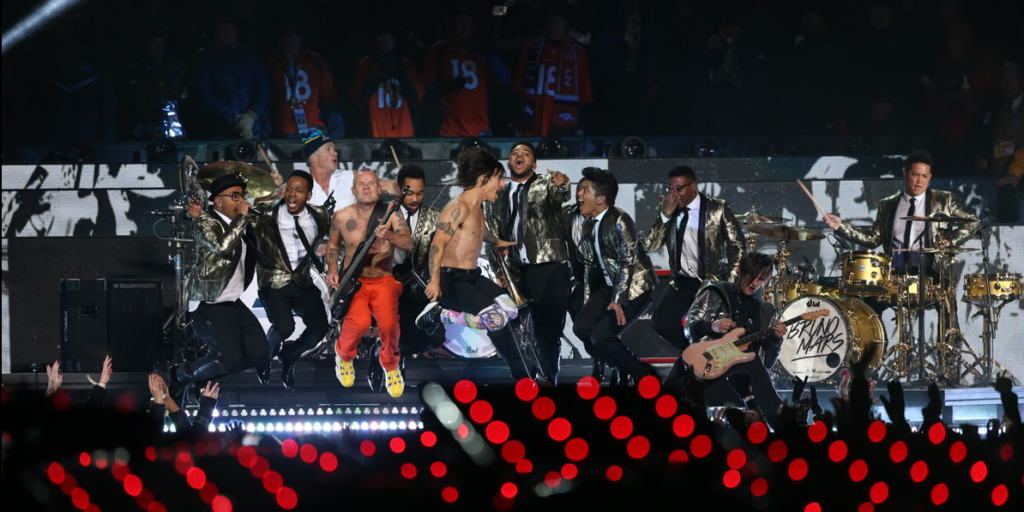 Surely I was not the only one to do a double take when I heard who would provide Sunday’s mid-game entertainment: Bruno Mars, with the Red Hot Chili Peppers’ support. The two artists seemed like they might mix into a combination as unappetizing as ice cream and pickles.

I suppose, though, that the Superbowl is about entertainment. And if a seemingly random musical pairing can add even more satisfaction to the American festivities of eating appetizers, drinking beer, and watching two groups of grown men in garish costume run at each other at full speed, then why complain?

First, there was Bruno Mars with his contagious grin, cheerful backup band, and eyebrow-raising lyrics. Admittedly, the retro sound  of Bruno Mars’ latest hits (Locked Out of Heaven and Treasure) may not have been pleasing to all the die-hard football fans.

So, next, the rockers from the Red Hot Chili Peppers swarmed the stage. Lead singer Anthony Keidis may later regret his wardrobe choice (weird tights under shorts, no shirt), but at least he did a good job making sharing the stage with Bruno Mars look natural. Flea, the equally shirtless guitarist, looked at home in his own corner of the stage as Mars and Keidis sang into the camera.

We might have been confused about why Bruno Mars and the Red Hot Chili Peppers were picked. This confusion even prompted Mark Quenzel, and NFL official, to comment, “There’s this perception, it is what it is, that we settled for Bruno Mars. Nothing could be further from the truth.”

Tempting though it is to measure this performance by Beyonce’s crazed one last year, the two are too different. Bruno Mars has the pleasant, hip-thrust thing down, not really looking to compete with Beyonce’s wild antics. Ultimately, they both show that loud, blaring fun really is best, even in odd mixture.

Anyway, who watches the Superbowl for its subtlety? 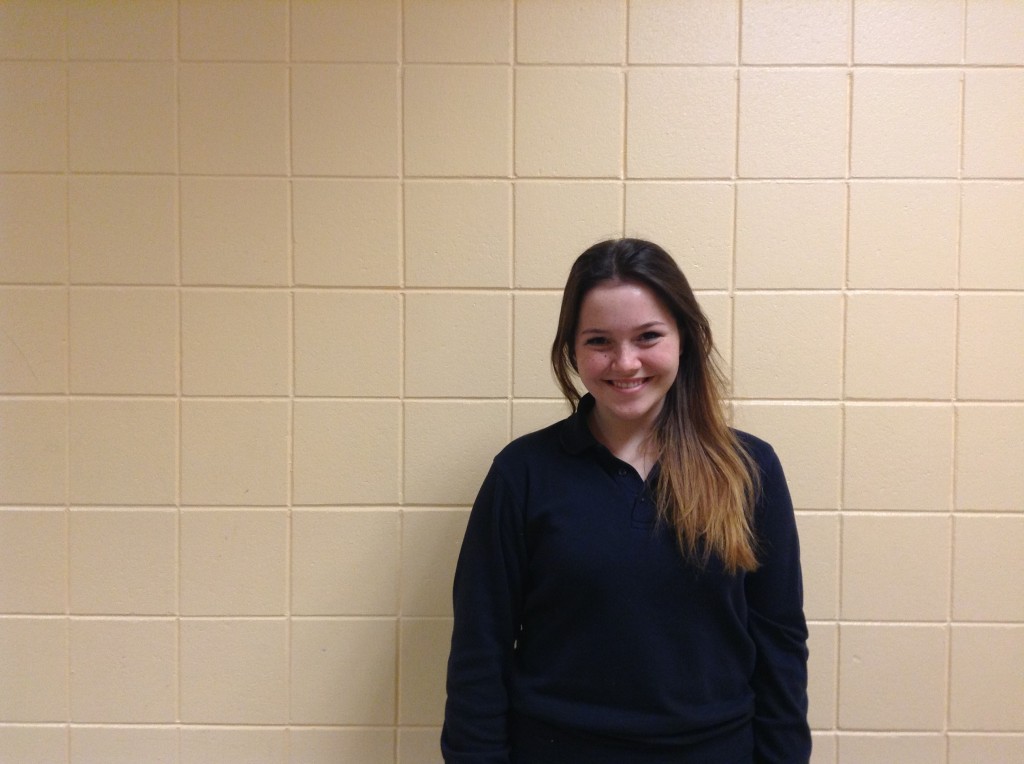 The script has been chosen, the cast list has been released and rehearsal has begun for the MSHSL One-Act Play competition. This year’s play is “The Romancers,” a romantic comedy originally by Edmund Rostand (perhaps better known for penning Cyrano de Bergerac).

“It’s got flexible casting, it is classic literature like the school appreciates, it’s lesser known,” said Mrs. Melissa Simmons, Assistant Director, “And it’s a show we like.”

“We had the most auditions for our one-act in history,” said Mrs. Simmons, with prospective actors auditioning for six speaking roles and an ensemble.

“One of the contest rules limits us to 20 students,” said Mrs. Simmons, referring to the strictures of the MSHSL for competing schools; this includes the crew.

The cast will perform the play at sections on February 1. This year, PA’s goal is to do as well or better than they have in the past. Since last year’s One-Act won second place at sections, the new goal is to get second or better.

“They’re different judges every contest,” said Mrs. Simmons, meaning that no school can tailor their choice to a type of judge. “We try to create a play that we’re proud of. And if we do that, we have a chance at success.”

Mrs. Simmons said the overwhelming factor is: “Did the judges like the way you did it?”

“Students who audition are also considered for a couple of other acting opportunities,” said Mrs. Simmons, meaning that all interested in performing in the One-Act have the opportunity to act in either an advent presentation and A Christmas Carol at the Strings concert.

“We had a strong cast last year,” said Stage Manager Grace Garvey ’14, “and I’m confident that this year we will once again move on to sections.”