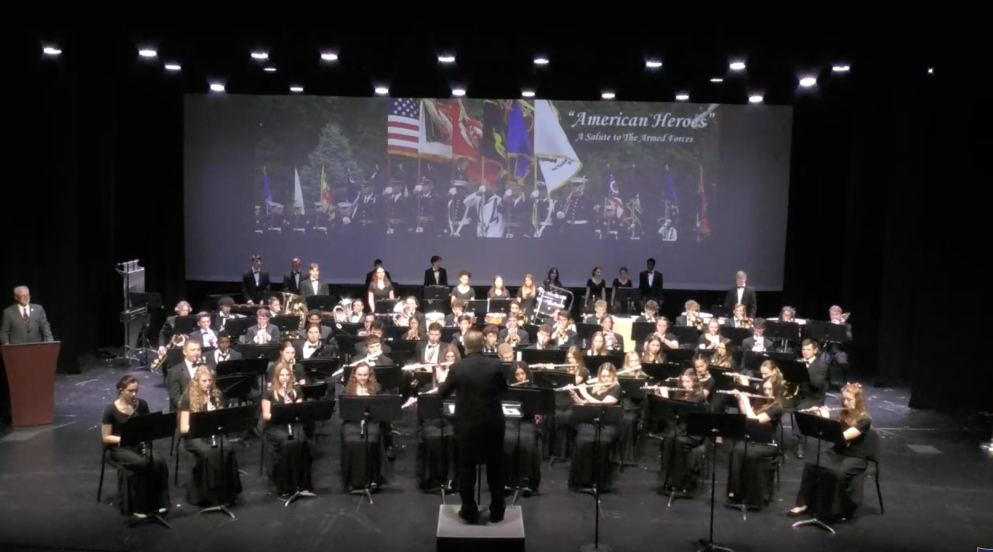 How can one truly define what we owe veterans? At the beginning of this year’s Patriotic concert, Symphonic Band Director, Mr. Thomas Jones, quoted, “A veteran–whether active duty, discharged, retired, or reserved–is someone who, at one point in their life, wrote a blank check made payable to the United States of America for an amount up to and including his or her life.”

On Thursday November 10th, the Providence Academy Symphonic Band, along with Mr. Jones, took the PAC stage for a night to remember all who have served in the military. The Patriotic Concert has become an annual tradition during the week of Veterans’ Day, and is a rewarding time to recognize veterans and their contributions to the United States.

The night began with a prayer and introduction by Headmaster, Dr. Todd Flanders, thanking all of our veterans for their attendance and for their service to our country. The concert was filled with entertaining songs such as, “A Nation’s Prayer”, “Stars and Stripes Forever”, and “Thunderbolt”. The concert concluded with a fan favorite, “American Heroes”. As the song played, veterans in the audience were encouraged to stand when their branch’s song was played, to be recognized for their service. Finally, during the last section of “American Heroes”, the band played “America the Beautiful” and the audience beautifully sang along.

Providence Academy believes that it is very important to put on this concert every year. Jones conveyed, “We are reaching a time in our country’s history where patriotic concerts are becoming less popular and this ideal of nationalism and patriotism is being lost. I think it is so important that we at PA preserve our heritage.”

Jones went on to say, “We at PA are not endorsing one political party or another. What we are doing is saying that we are unified as a country and no matter what challenges we face, we are going to need to face them together.”

PA parent and Army Veteran, Katie Heubschen, remarked, “I am so honored that Providence takes the time to recognize veterans, and it is also very special to look around and see others who have served.”

The concert was a perfect way to celebrate the exceptional men and women who served our country and to show our true appreciation for their sacrifices.