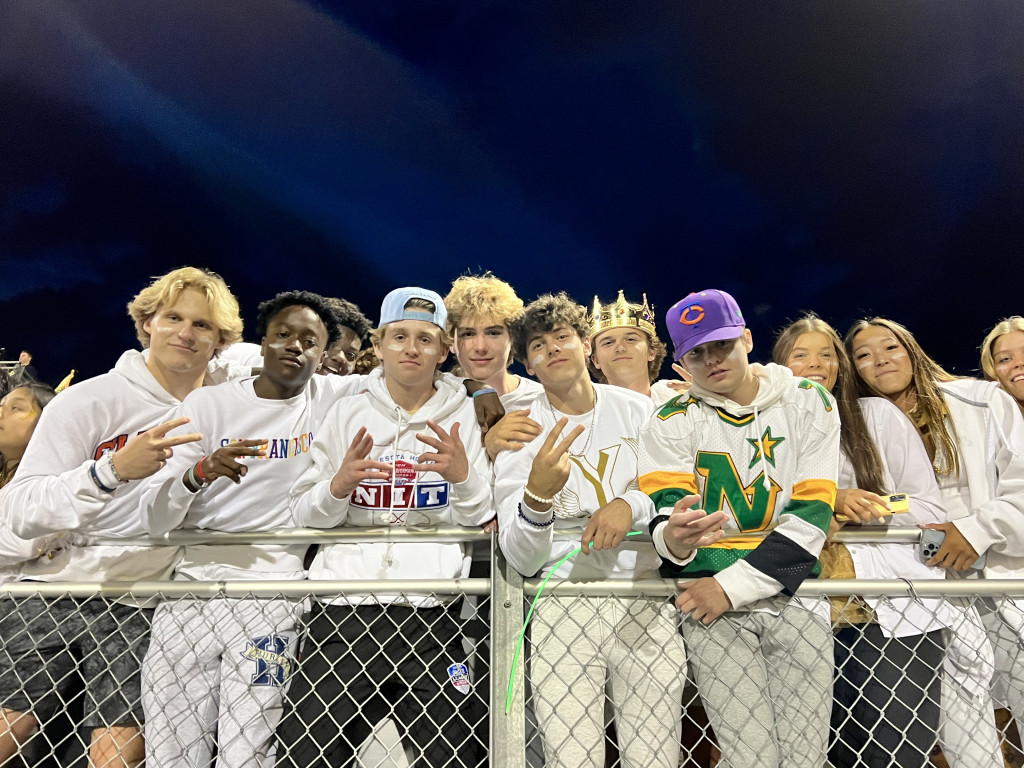 Homecoming week is one of the most anticipated events of the school year for all ages. From dress up days to pep fests, Providence Academy students had one busy and exciting week!

The Upper School had plenty of out of uniform opportunities, with a new theme each day. On Monday, the students wore outfits inspired by different holidays based on their grades. The freshman theme was Valentine’s Day, the sophomore theme was St. Patrick’s Day, the juniors’ was Halloween, and the seniors’ was Christmas.

The students also competed in a hallway decorating competition on Monday. Fifth graders voted on each Upper School grade level hallway’s decor at the end of the week. It was a tough choice, but the freshmen ultimately walked away with the win, earning an out of uniform day during finals.

On Tuesday, students were invited to wear their “Sunday Best” for Mass. House leader, Lily Regensburger, ‘24, explained, “We were really excited that our idea for ‘Sunday Best’ was approved by the administration. It was fun to see everyone’s participation and also their respect for our Upper School Mass.”

Wednesday, the high school was full of Hawaiian shirts and socks with sandals, as students participated in a “Tacky Tourist Day.” Alena Rossini, ‘23 commented, “It was so exciting to see my grade go all out on the theme!”

Wednesday night was the annual Powder Puff flag football game. The junior and senior girls faced off in an intense game, which resulted in a senior win, despite the efforts of the juniors. Inga Nelson, ‘24, said, “Our class was underprepared but will do better next year!”

On Friday, everyone was dressed in either “West Coast” or “Wild West” attire. Some students wore jeans, boots, cowboy hats and flannels, while others wore “jorts,” chains and other oversized outfits.

“My favorite part of homecoming week is the dress up days, because it is a fun opportunity to not wear our uniforms,” expressed Annabelle Whitaker, ‘25.

On Saturday evening, Gym A was bursting with excitement for the annual Homecoming dance. This year’s theme was “Out of this World,” with the gym decorated with stars and all things galaxy related. Prizes were awarded to six winners after the dance: Best Dressed went to Alyssa Condon, ‘23, and Peyton Bartz, ‘25; Best Dance Moves went to Miles Mueller, ‘24, and Bryn Brueggeman, ‘26; and Life of the Party went to Patrick Newman, ‘24 and Kathy Mogere, ‘26.

“I’m very honored to have received this award and to have lived up to the Newman name,” said Newman.

The homecoming fun was not just for the Upper Schoolers, but for the entire school. Middle school students also had the opportunity to dress up for themes like “Blue Out,” “Sunday Best,” “History Day,” and were allowed to dress in PA spirit wear.

In the lower school, students were allowed to wear spirit wear and their gym shoes all week to celebrate!

The entire school attended the annual Homecoming Pep Fest on Friday afternoon. Students were able to participate in “Minute to Win It” games, Tug of War, and Musical Chairs. The Providence Academy band, lead by Mr. Thomas Jones, played many lively songs to get the crowd fired up as well.

Friday night, the boys’ varsity football team, led by quarterback Eddie Dossantos, ‘23, beat Breck 17-6. Both touchdowns were scored by Josue Riley, ‘23; and Ryan Hutt, ‘23, successfully made both kicks for extra points, in addition to a field goal for the Lions.

The fans made it a fun and memorable end to the week, dressed in plenty of white and gold, and of course the PA student section’s traditional team spirit added to the win!