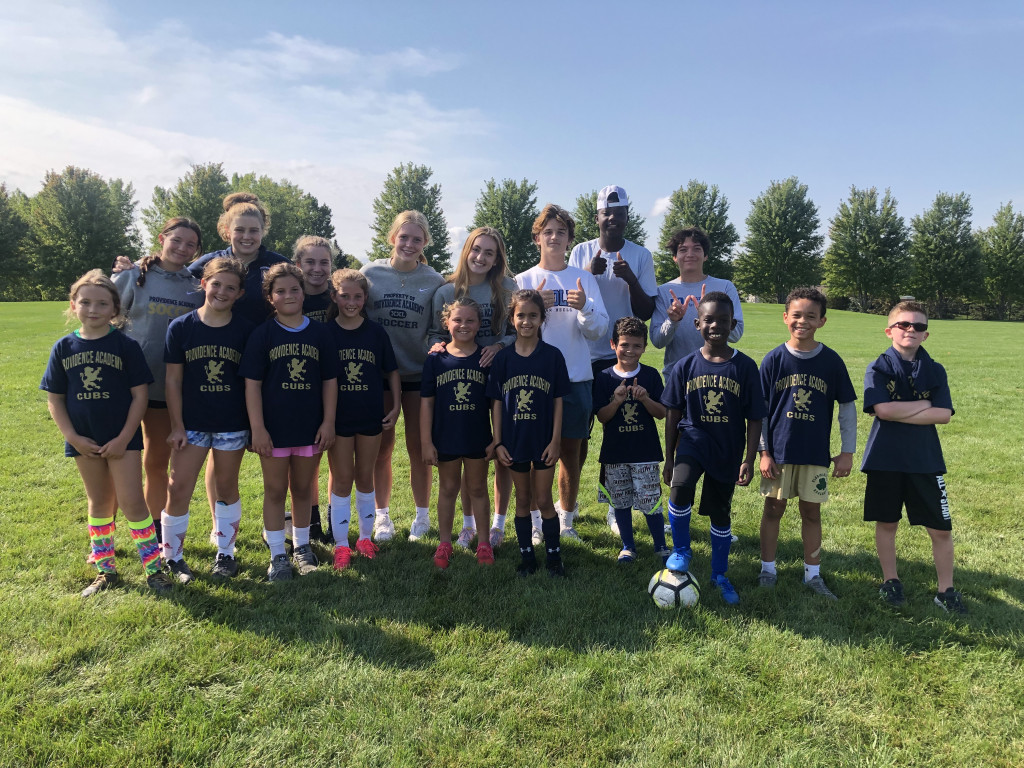 The day was packed with fun, running from 9:00am to 12:00pm, with Lions games afterwards.

The first activity on Super Soccer Saturday was an intramural soccer clinic for the “Cubs” (students in grades 3-5), and both boys and girls varsity team members volunteered to help the coaches run the program. It was a great experience for the aspiring PA soccer players to learn from the upper schoolers, who shared their love of soccer with them.

Girls varsity soccer player Tatum Janezich, ‘25, said she volunteered not only to receive service hours, but also because, “I enjoy working with kids! It’s cool to help share the experience of being a soccer player with the younger ones.”

Towards the end of the clinic, all of the younger soccer players broke into two teams—a girls’ team and a boys’ team—and played a very lively, but shortened game of soccer. Both teams even came up with their own chants to cheer each other on. The Middle School mini-scrimmages began shortly after the Cubs’ clinic, with both the girls’ and boys’ teams each playing an exciting match.

The players were not the only ones able to participate in the Super Soccer Saturday experience. Parents were able to watch their children play soccer while also enjoying the “Minnesota Carnivorium” food truck stationed at the fields and also the concessions. Even the varsity and JV girls’ teams gathered in community for a brunch that morning, to bond and fuel up before their own games against Wayzata High School and Heritage Christian Academy.

After the varsity game, to celebrate Youth Soccer Day, all youth players who wore a club or school soccer jersey received a free treat from the concession stand, which they could enjoy while they watched the Lions’ games. Many of the lower schoolers remained at Providence after their own soccer concluded to participate in this celebration and to cheer on the Lions.

Fifth grader Annie Lee, who attended the Cubs’ Clinic, said that her favorite part of the day was, “The girls’ varsity game because my sister is on the team and I love watching the high schoolers play!”

Overall, the PA Soccer Booster Club’s first Super Soccer Saturday was a success and a great experience for all players—lower, middle, and upper schoolers.

There is a possibility that this event will continue in future years, as Girls’ Varsity Head Coach Paul Cronin noted, “We would absolutely do it again. This is the first time we’ve done an event like this. It was very inspiring to see the older players serve as such good role models for all of the aspiring young players.”

Perhaps the lower school students will someday be teaching young players how to play the sport they love, as varsity team members.