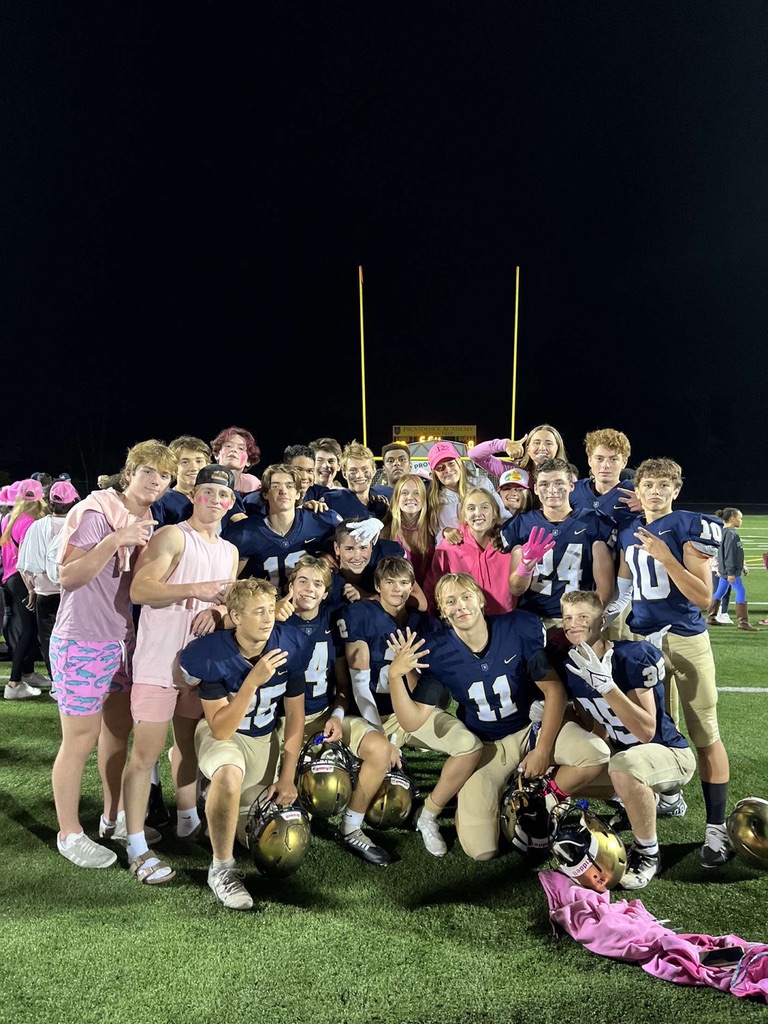 Blue, gold, and pink! The Providence Academy football team came out with an exciting win Friday September 9th, on their home turf, with cheering fans dressed in pink to support the Tackle Cancer mission of raising money for cancer research.

The PA Lions’ football team took on the Spectrum Sting on Mithun Field for a thrilling second game of the 2022 season. The players were anxious to get on the field for their first home game of the season, striving for a win to make their record 1-1. The team delivered, to the delight of their fans, with a 20-0 score.

Spectrum’s defense caused a Lions touchdown to remain elusive throughout the first quarter, with the score remaining 0-0, but  Captain Stormy Knight, ‘23, pulled off the first touchdown of the game in the second quarter.

From then, touchdowns were scored by Captain Eddie Dossantos, ‘23, and Colin Capouch, ‘25.

“The game got off to a slow start,” mentioned quarterback Eddie Dossantos, “but things picked up as we went on. Boys played well and hard and we came out with a W.”

The team’s supporters were decked out in pink to support the Tackle Cancer mission. Providence annually fundraises at one home game to help further cancer research. Along with raising money, it is also tradition to wear pink clothes and accessories to support the cause.

The players were not the only ones ecstatic for the home opener. The fans, including those from the team’s co-op schools–Heritage Christian Academy, Maranatha Christian Academy, and West Lutheran High School–packed the stands and were extremely active in cheering on the Lions throughout the game.

“I think we have really great team spirit,” exclaimed PA student Katelyn Clements, ‘24. She continued, “Everyone is joining in the cheers and is really rowdy.”

The Providence community shined on the field, along with the players and coaches. Providence’s dance team performed during halftime, which energized the fans for the second half. It was also the annual Youth Night, where youth athletes were able to accompany Providence players onto the field during the announcement of the starting lineup.

The home opener built anticipation for the upcoming season, and the energy on Mithun Field and in the stands proved that the Lions have immense support behind them. With the Homecoming game on September 31 and the excitement surrounding upcoming theme games, the Lions’ season will surely be one to remember.