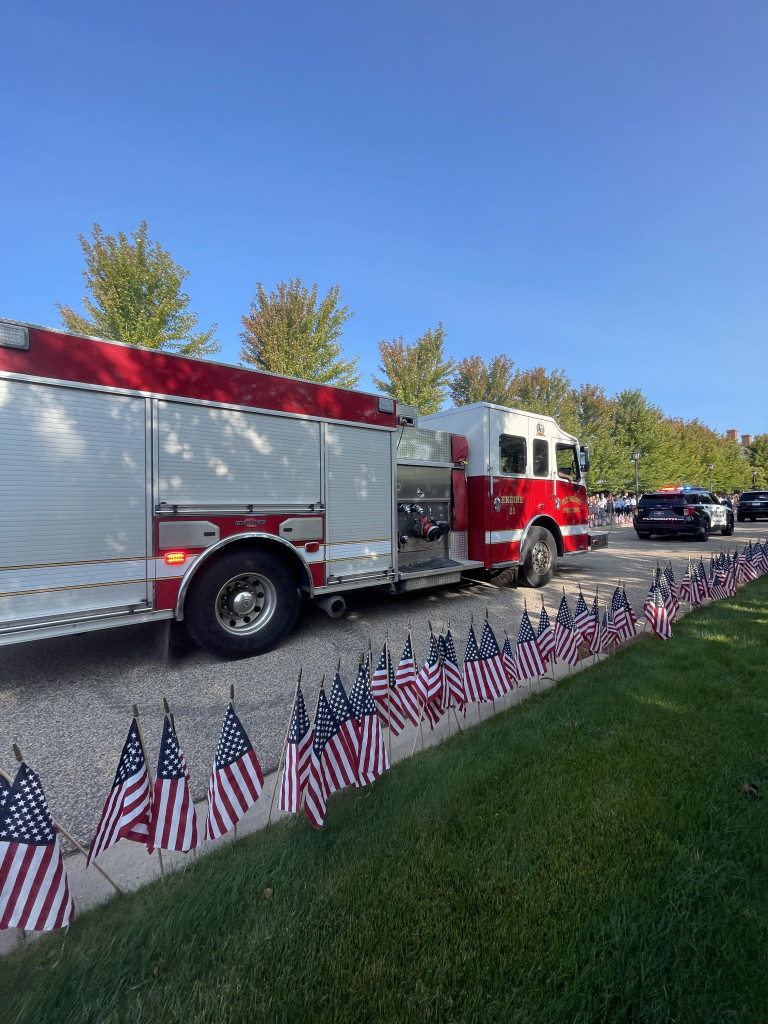 John 15:13 is not only a verse often quoted by Providence Academy Headmaster Dr. Todd Flanders, but also one that calls to mind the events of September 11, 2001.

The verse reads, “Greater love has no one than this, that a man lay down his own life for his friends.”

Flanders explained, “It reminds us that we are called to show honor to those who sacrifice their lives,” which is exactly what PA students did on September 12, 2022 during the annual 9/11 commemoration.

American flags lined the campus, representing each life lost in the attacks, a tradition that began in the early 2010’s with the help of the Lions for Life group.

“There are 2,977 flags, and each one set up by students represents one life lost that day,” explained Lions for Life president Rylie Schoenfelder, ‘23, who has been involved in setting up the memorial for the past four years.

In front of the flags stood every PA student and faculty and staff member watching Plymouth’s own first responders drive through.

“When you turn the corner and see everyone standing out there in remembrance, it’s very humbling,” stated Plymouth traffic control officer Anthony Elia, who first came to the PA memorial six years ago. “It’s huge to see everyone’s respect for the profession, which boosts all of our morale as officers.”

Despite this part of the ceremony being the most anticipated by the officers as well as the community, both inside the yellow walls and throughout Plymouth, it was actually the result of an impromptu idea in 2015.

“Initially, the fire department called and asked if they could go through the campus to look at the flags because they’re quite iconic. So, I had the faculty bring everybody out to surprise and honor them while they drove through,” Flanders revealed.

Although it is important to focus on first responders during this time, 9/11 was significant for veterans as well.

11th grade US history teacher and former Army Armor Officer, Mike Guardia, expressed this saying, “I felt the Global War on Terror would be a war unlike any other. Following 9/11, we were no longer training to fight a conventional enemy.”

For Guardia and other veterans who have risked their lives protecting us, the PA memorial proves itself to be powerful.

“Veterans will drive up and around the campus this weekend, and they weep to see our students honor all of the lives lost,” described Flanders.

Even though tragedy can often tear apart communities, 9/11 did the opposite.

Dr. Flanders felt it was important to gather students in an effort to show them, “their lives are about more than just themselves. We decided to call the middle and upper school to the chapel that day, to inform them what was going on, and to lead them in prayer.”

In a similar way, PA’s commemoration continues to bring the community together each year.

“Everyone came together after 9/11, and that’s kind of the feeling that you get when you come out to Providence for the memorial,” noted Elia.

As 9/11 shaped the country, it also shaped Providence Academy after its occurrence on the sixth day of the school being open.

On that day, Flanders released a note to families saying, “As the aftermath of this tragedy unfolds, faculty and staff will be available to help students to think about the events, and to try to understand matters that are, admittedly, very hard to understand.”

President of the Board and PA parent, Mr. Bob Cummins, emphasized the importance of keeping this tradition saying, “It’s especially significant for young people to remember and to understand what went on.”

No matter how many years pass, Providence Academy students will never forget what happened on September 11, 2001, because as stated by Flanders, “There is something true, good, and noble about doing this.”