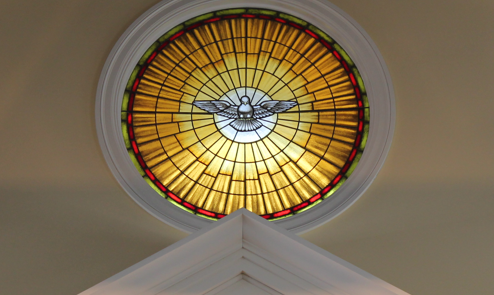 Students sitting down during mass may have recently been second-guessing themselves or perhaps walking towards the altar noticing something a bit different, and with good reason. The PA Chapel, Chapel of Our Lady of Divine Providence, now holds a new stained glass window, depicting the Holy Spirit as a Dove, shining down on the chapel.

In addition to this visible reminder of an invisible reality, the new window also aids in one of the main purposes of a chapel, to gradually point one’s eyes up to God. The chapel accomplishes this best by the pews guiding worshippers to look towards the altar, then the altar leading them right to the cross and pediment, and now to the new beautiful stained glass window.

The idea of this project was sparked three years ago between Chaplain Father Michael McClellan and Chairman of The Board of Directors, Mr. Robert Cummins. Working to accomplish many goals for the chapel, this recent one was modeled after a similar window in St. Peter’s Basilica in Rome and re-made here by a stained glass window company, Gaytee-Palmer.

Even though this idea came easily, the process to get it here and the work to put it up was more difficult. Not only has this project, like most other things, suffered COVID-related delays, but it is also an intricate task by nature, even when things run on schedule.

As one might imagine, installing a window that is itself a work of art, above a pediment, on an altar, above a tabernacle is difficult work. “They came in to do measurements and quickly realized that it was going to be harder than they thought”, recalled McClellan. The installers even had to put in a bunch of scaffolding to even reach the window but the students and staff agree the work was well worth it.

Now that the window has been installed and there are no other plans currently in the works for the chapel, it is important to reflect on the benefits of such additions. “The chapel provides a very rich and holy aesthetic when guiding us into the highest form of prayer,” noted Flanders. “When we are put in a more serious environment, we tend to have a more serious and enlightened understanding,” he continued. The window and other beautiful adornments are more than decorations, they are an invitation to prayer.

A place of worship shapes worship itself. The beauty of the chapel and its physical traits help to open minds to the beauty of the Faith. In reflection, Sam Trombley ’22 added, “All the physical things are there, what’s needed now is for students to be respectful and solemn when we come to Holy Mass. I hope students can [come to] understand the great joy and importance present at every Mass…but change happens slowly; one can only work on their own interior life and not let others bother them.”