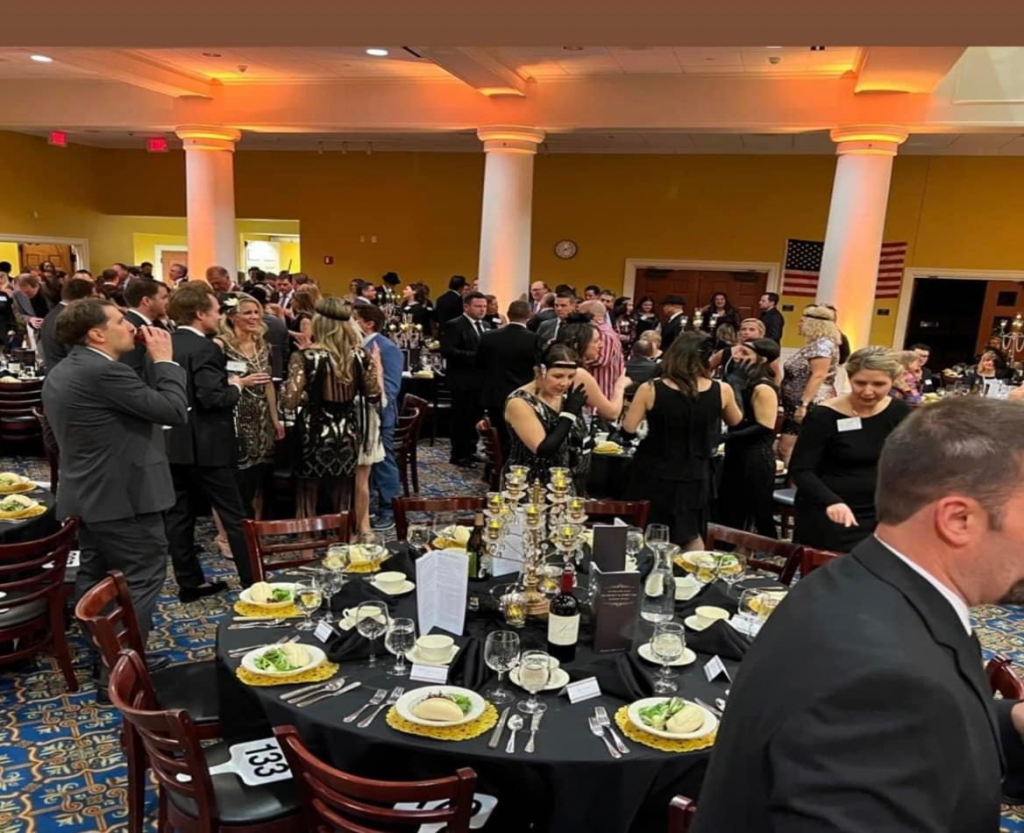 “I like large parties. They’re so intimate.” wrote F. Scott Fitzgerald in his 1925 novel, “The Great Gatsby.” This year’s annual Gala truly was a large party, with a record 370 guests attending the event that embodied the spirit of America’s “Roaring Twenties,” fitting for the 20th Gala.

From the black and gold decorations, champagne flutes, jazz music, and even a Juice Joint, the school’s mezzanine level and great room were decorated to dazzle like all things during the Jazz Age. All in attendance brought out their Glad Rags (party clothes) and came to celebrate with good company and a tasty dinner…sources say there may also have been some Giggle Water thrown into the mix.

Mr. Chris Wrede, Manager of Annual Giving and Events Faculty and PA dad, was Anderson’s right-hand man throughout the whole planning and execution of the gala. He remarks: “ I worked with silent auctions, donations, sponsorships, minute-by-minute needs of the day. It was a lot of setting up and closing shop afterward.”

All of the hard work and planning paid off, Wrede continued. “I would say this is the most successful gala we’ve had in the history of this school.”

After a night full of silent auctioning and live bidding, two fund-a-need projects: remodeling of the admissions and health office and a new serving station for Chef Morris´ ever-popular grill line, were accomplished.  The PA Headmaster, Dr. Todd Flanders, remarks in his Headmaster’s Blog post on May 2nd that: “Early returns show that the Gala brought in over $630,000 in gross proceeds, substantially more than any other PA Gala.”

Mr. Wrede remarks on how meaningful these donations are not only to the school but to himself. “The funds that are raised go straight into the operation of the school,” he says. “This is very important to me both as a staff member and as a parent, to know that these funds will end up right back in the school”.

PA mom and Gala attendee, Mrs. Maureen Flynn, described the night as one of the best galas she’s ever attended. She noted: “This year’s gala was beautifully executed and wildly successful in both attendance and generosity. You could tell a great deal of thought went into setting the theme with decorations and music.”

Wrede also noted the generosity of the gala attendees, saying “Walking around, you got a real sense of excitement, love, passion, and commitment to the school, which was reflected in their giving.”

Fitzgerald said that “If personality is an unbroken series of successful gestures, then there was something generous about him”. The immense generosity of PA families has made the 2022 Annual Gala a roaring success, with the nifty celebrations going well into the night.