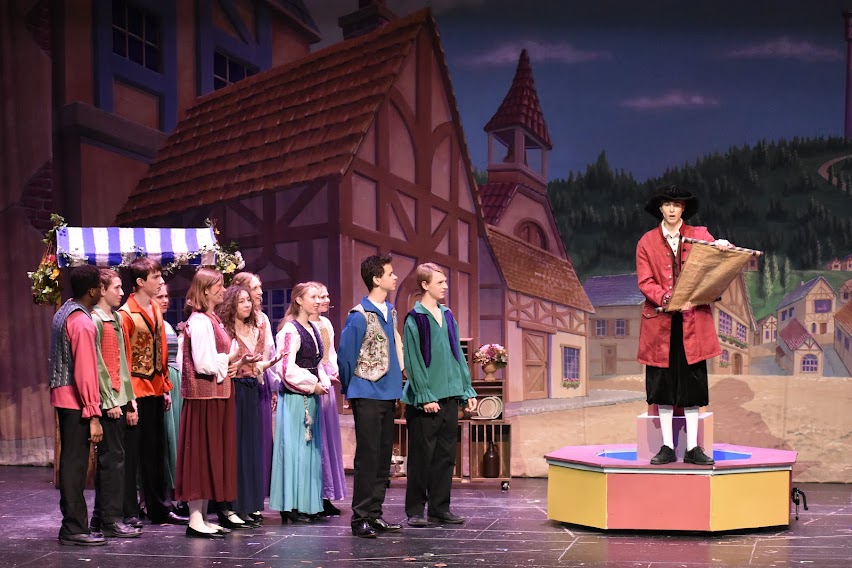 After months of auditions, preparations, and rehearsals, the PA Players are proud to present Rogers and Hammerstein’s Cinderella. With wonderful performances, incredible sets, and euphonious singing, Cinderella is set to be the most intricate musical at Providence in years.  Showtimes are today and tomorrow at 7:00 PM, and Saturday, and Sunday at 2:00 PM, in the beautiful Performing Arts Center.

The story is the classic fairy tale everyone knows and loves. With its comedy, drama, adventure–and especially romance–, fans of all types of shows will surely enjoy the production.

Providence has been putting together Musicals under the direction of Mrs. Melissa Simmons since 2005. Since the opening of the PAC in 2017, the musicals have progressively gotten more and more grand. Unfortunately, due to the Covid-19 pandemic, a full-scale musical has not been performed since 2019, leaving actors eager to perform and theater enthusiasts eager to attend.

Another unique facet of this particular performance is that Providence has done this same musical before, in 2009. Simmons reassured, “This time will be different. Our stage is much bigger. Last time we were in the great room, and so space constraints took some of the magic away, but this time you’ll see the magic.”

Sydney Borland ‘22 stars as the kind-hearted title character, shining in her role and truly perfecting the vocals. Her love interest, the prince, is played by Jack McElroy ‘22 who perfectly depicts the lovesick royal.

The comedic elements of the show can undoubtedly be attributed to the stepsisters, played by Liz Burns ‘23 and Olivia Trader ‘23. Their boisterous outfits and talented performances add a whole new hilarious dimension to the play.

Another central character, the fairy Godmother, is beautifully portrayed by Kortney Onyambu ’24. Her vocals and performance are incredible and elevate the show.

The talented cast and crew complete an unforgettable ensemble. Though the cast gets the glory, the crew is truly at the heart of this year’s play.

Olivia Bissonette ‘22, the talented stage manager who has participated in PA theater the last five years explained, “From a technical standpoint, we are doing a lot. We have almost forty sound cues, not to mention the backdrops. There’s a lot going on and it will look really cool.”

Anika Ausvold ‘24, the talented and energetic choreographer, has taught the dances of the musical numbers to the cast. Like Bissonette, Ausvold is a five-year theater veteran. She has enjoyed this production and expressed, “I love how supportive everyone is and how we have created such an amazing theater family.”

PA Middle School students have already had a chance to preview the production. They’re calling it “Amazing!” and “Hilarious!” and were especially impressed with the special effects at the moments of transformation for Cinderella, from Broom-Sweeper to Belle of the Ball.

Without a doubt, the entire PA community should attend the event with their friends and family. All ages will be absolutely enchanted by the bright colors, beautiful costumes, and wonderful sets as the PA Players bring this classic tale to life.