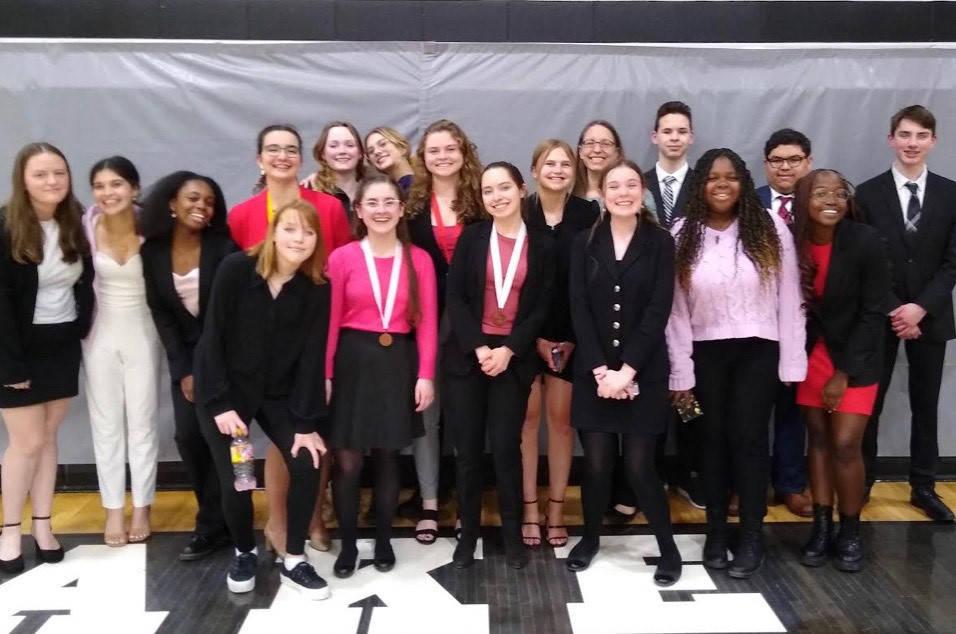 A typical Thursday for high school students probably does not include wearing formal business attire and presenting a speech 3 to 4 times in front of a judge and timekeeper. However, members of the Providence Academy Speech Team did just that on April 7, as they ventured to Maple Lake High School to compete in the Section 2A tournament.

“Speech is a MSHSL sanctioned activity, which gives students the opportunity to work on public speaking skills through a variety of categories,” explained coach Megan Simonson.

“Through speech, I’ve learned a lot about things I never would’ve otherwise researched,” emphasized captain Skylar Bartz, ‘23. “It helps me educate myself on important issues and learn to talk about them with some kind of authority.”

Bartz has indeed learned how to speak with authority, as recent judging confirmed when she earned her ticket to State in the Discussion category.

Though the speech team started out with just five members, in the past few years, it has quadrupled in size and become a contender against peer schools because of the participation of students like Bartz.

The growth of the program “gave us a consistent, supportive, and driven group that competes,” said Simonson. “The fact that we have students in every category except one helps gain points.”

In the week leading up to sections, most team members worked on memorizing and tweaking their speeches. However, for Bartz, “It was more mental. I didn’t do much other than approaching the competition with a goal in mind and a certain level of confidence.”

The speech team not only gave it their all, but also made school history, placing 6th out of 14 teams and sending three members to the state tournament. Bartz,  Aly Marshal,  ‘23, and Violet van Gyzen, ‘24, will represent PA at Eastview High School on April 23 in Discussion, Humorous, and Storytelling, respectively.

“I’m so proud of how we did at sections! For a small school, we do really well, and our placement shows that we put in a lot of effort and dedication,” van Gyzen–who ‘finaled’ for the first time in her speech career and earned a spot at State–remarked.

Simonson shares van Gyzen’s sentiments. “Join Speech!” she exclaimed in the wake of their recent success.

Simonson continued, “We are always excited to have new members, and even if you are super nervous to get up in front of a group of people, you should just try it. You can compete at whatever level you’re at.”