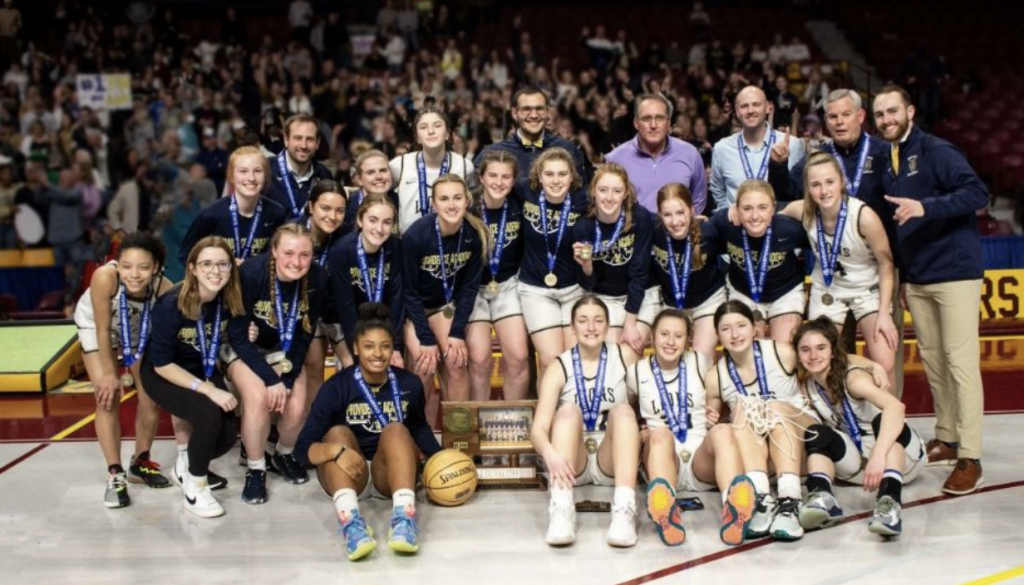 The Lions moved on to the Class AA state tournament which took place at Williams Arena at the University of Minnesota campus. The Lions won both the quarterfinal and semifinal games, putting them in the State Championship game on Saturday, March 19th where they faced number 2 seeded Fergus Falls. It was a close game, being within two points up until the last seconds, but the Lions walked away with the state title.

Not only was this a reflection of the hard work the team put in all throughout the season, but it was also a happier ending than last year’s state tournament game. Coach Conner Goetz reflected, “Losing in the championship last year was a motivating factor for us this year. We knew what we failed to accomplish, and to get back to the championship game was a main focus of ours.”

With four out of five starters returning and new talent coming into the program, the girls knew winning state was a possibility. Senior Captain Maria Counts ‘22 stated, “our team had a lot of new talent and figuring out how everyone could contribute ultimately led us to the win.”

Though winning state was one of the top priorities, it was not the only one for this year’s team. The relationship that the team created off the court was equally as important.

Hope Counts ‘25, younger sister of returning starters Maria and Grace, commented on the team culture, “Besides helping and pushing me to be the best player I could be, [the team] also comforted me like a family does when I didn’t play my best, whether that was through cracking jokes or just saying something to bring me up.”

While the girls celebrate their state title, they also look forward to the next season. Goetz reflected on the positive outlook of the program when he said, “One of the most special things about our team culture and chemistry is how it grows stronger every year. I’ve been incredibly fortunate to have some great leaders and captains come through our program that put in the work to build a team culture we can all be proud of.”