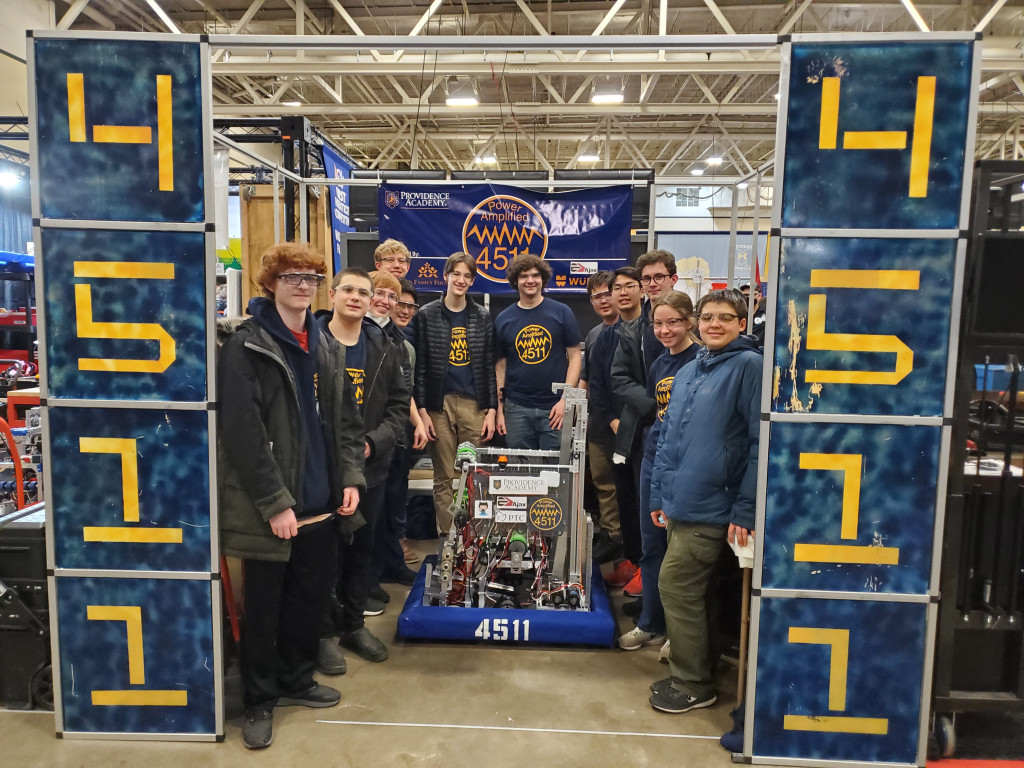 Duluth is a place known for its harbor, but earlier this month, the Providence Academy Robotics Team saw a different side of this city in the annual Robotics Competition. On March fourth and fifth, PA high schoolers pitched their robot against others from all across Minnesota in a battle of climbing bars, balancing on beams, and throwing balls. Though limited to one weekend, this competition is the product of many months of preparation. And not all preparation came in the form of building or coding. Robotics Club is much more than building a robot: it is about camaraderie, education, and competition.

Robotics is unique in that it allows members to use creativity and critical thinking to design, build, and enter a robot into a competition. Each year the club works hard to build a robot that is capable of completing several challenges laid out by a national league. These challenges change from year to year, giving members a completely different experience than the previous season.

“We have both a middle school and high school team, each builds a complex over a few months and then tests their robot against other schools,” says Micheal Plucinski, the PA physics and engineering teacher who has been running robotics since 2013.

The construction of the PA robot happens from December to February each winter. The first step the team takes is designing a robot that can achieve all the season’s challenges.

“Choosing the design of the robot can often be the most chaotic part of the season. All the members split into groups and brainstorm possible designs. This year, for example, one of the challenges was to make a robot climb up a set of bars. It seemed that each team member has a completely different idea on how to get the robot to climb and it took a lot of debating to finalize a design,” commented Matthew Narog ‘22.

The process of building the robot is just as difficult as coming up with a well-engineered design. There are many different aspects of building a robot the team needs to consider.

Robotics Captain Nathan Hemmesch, ‘22, says “We need to divide and conquer if we want to finish the robot in time, this means we have lots of smaller teams working on individual parts like the chassis, motor, or programming. Coordinating all these smaller teams to eventually lead to a successful robot can be very difficult.”

After months of hard work, the robot is finally ready for competition. Each year all teams from the region drive their creations to Duluth to find out which robot best completes the task.

“The Duluth trip is always my favorite part of the season. Seeing all the hours we put into the robot finally pay off is an incredible experience. Even outside of robotics, hanging out with my friends outside of school is always a good time,” stated Captain Christopher John Festin, ‘22.

If you are interested in learning about robotics, the sign-ups open next fall for the 2023 season!