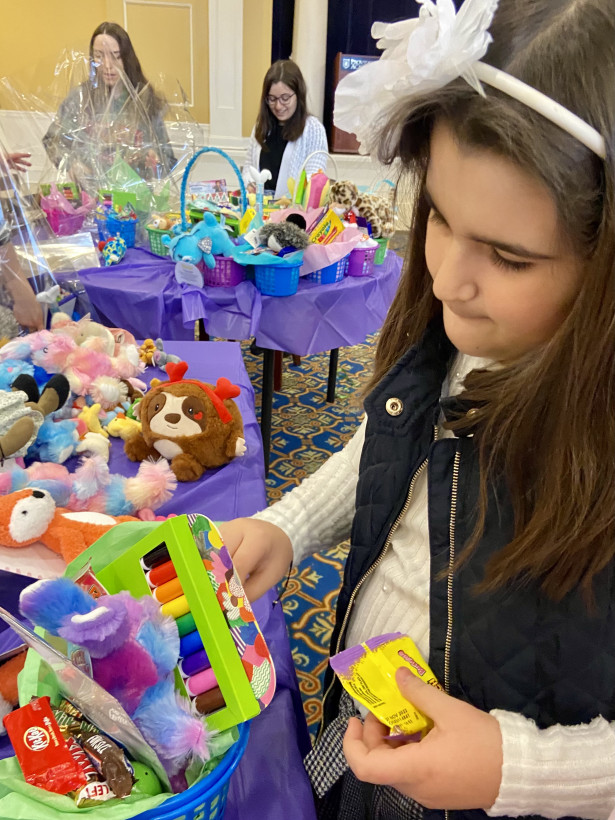 Lent is not just a time of prayer and fasting, but also action. These three pillars of Lent mark a penitential season, and give Christians a chance to prepare for Easter.  As a kickstart to Lent and a means to show students, hands-on, what this third pillar of lent can involve beyond monetary gifts, Providence Academy hosted its annual Lower School Service Day on Saturday, March 5.

Lower School Director Mrs. Nancy Galgano played a key role in organizing, promoting, and running the event, consisting of not just one, but seven service projects. She noted, “the best way for the kids to learn how to serve others as Christ did is to do something.” Since its inception over ten years ago, this motive has made Service Day what it is today.

Galgano, along with Lower School parents, planned a day of family fun and learning that brought parents alongside students and teachers to contribute to creative outreach initiatives.

Families were asked to go to each of the seven stations, all benefiting different organizations and causes. At the Humane Society Station, tote bags were filled with dog food, treats, a toy, and a blanket. At another table, families decorated bags and filled them with snacks to later be sent to the Ronald McDonald House. To benefit Sharing and Caring Hands, over 150 Easter baskets were made, filled with coloring books, Easter eggs, candy, and other goodies. Families even filled lunch boxes with snacks, beverages, personal hygiene items, and a card to send to frontline workers in hospitals.

Nihal Limgan, a first grader at Providence, reflected on his first year attending the event; “It was so much fun!”

Limgan added, “Lent is a time to give to the people who are in need.” He especially enjoyed participating in the sandwich-making station with his family and friends. The table made over 150 turkey and cheese sandwiches that would be later handed out to the homeless in the Twin Cities.

Limhan and Galgano were not the only ones who mentioned the importance of almsgiving. Emma Boeing ‘22, was one of the many members of the National Honors Society who helped run the event. She was stationed at Limhan’s favorite spot and commented, “the determination of some of the kids to make the sandwiches and participate all by themselves really stood out to me.”

Boeing later echoed Galgano, “it was amazing to see the parents, students, and siblings come together to help others for the day”.

This Lower School Service Day was not just an opportunity for friends and family to come together, but a way to serve our brothers and sisters in need, just as Christ called us to do. From decorating Easter baskets to making turkey sandwiches, many individuals’ lives will be impacted through simple acts of kindness. The season of Lent is the perfect time to give back what you can, to grow in generosity and understanding that, even if financial means are limited, everyone can tithe with time and talent.