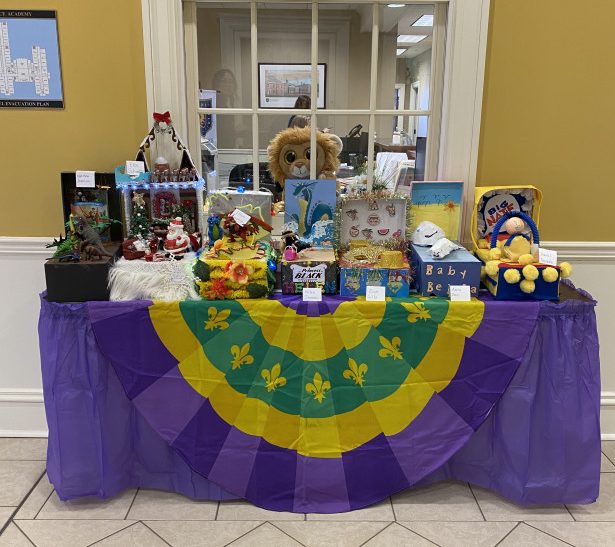 With the snow melting and temperatures rising, the season of Lent is upon us. But before the focus on pillars of fasting, almsgiving, and prayer, many Mardi Gras celebrations took place, including one within Providence’s yellow halls. This year the first grade class became the “Krewe of Rolling Readers” by making their very own parade floats while also enjoying Mardi Gras treats and learning about the traditions that originated in New Orleans.

Each student was tasked to make a shoebox float inspired by their favorite book before Fat Tuesday. The students were able to express their creativity by using flashing lights, bright colors, and twinkling sequins to create show-stopping pieces. Although the students were the heads of the project, it became a great bonding experience for families as they worked together to get them finished.

“I loved doing it with my mom!” first grader Emma Reed excitedly exclaimed while showing off her float.

The final projects lined the lower school hallways to display the first graders’ masterpieces and to share them with the other grades. The students also were able to bring in the book that their float was based on so that others could read it or so that teachers could read to them during free time. Creator of this new tradition, first-grade teacher Mrs. Lee, explained, “It’s a great way to celebrate while also being exposed to different literature. I wanted this project to not only create a great memory but also educate my students.”

Not only did the first graders get to read new books, but they also gained new knowledge about the American traditions of Mardi Gras. First grader Ethan Scotfield shared some of what he learned, teaching, “Mardi means Tuesday and Gras means fat in French.” The class also learned that the traditional Mardi Gras colors of purple, gold, and green represent justice, power, and faith respectively.

The first graders feasted on a traditional treat called the King’s Cake, which is a pastry cake decorated in rich purple, cheery yellow, and vibrant green that is baked with a tiny baby hidden in the center. Traditionally, whomever gets the baby in their slice has to buy the next King’s Cake, but in the class it represented good luck for whomever received it. Even though only one person found the baby, Lucy Pfiffner shared, “I think the baby gives good luck to the whole world!”

After the festivities came to a close, the reflective period of Lent started. The celebratory atmosphere has shifted so that everyone can focus internally on their relationship with God as they prepare for the Resurrection of Christ. As this season progresses, Father McClellan advises, “God has given us this time to reflect. Make a good effort and trust in Him, He will do the rest.”