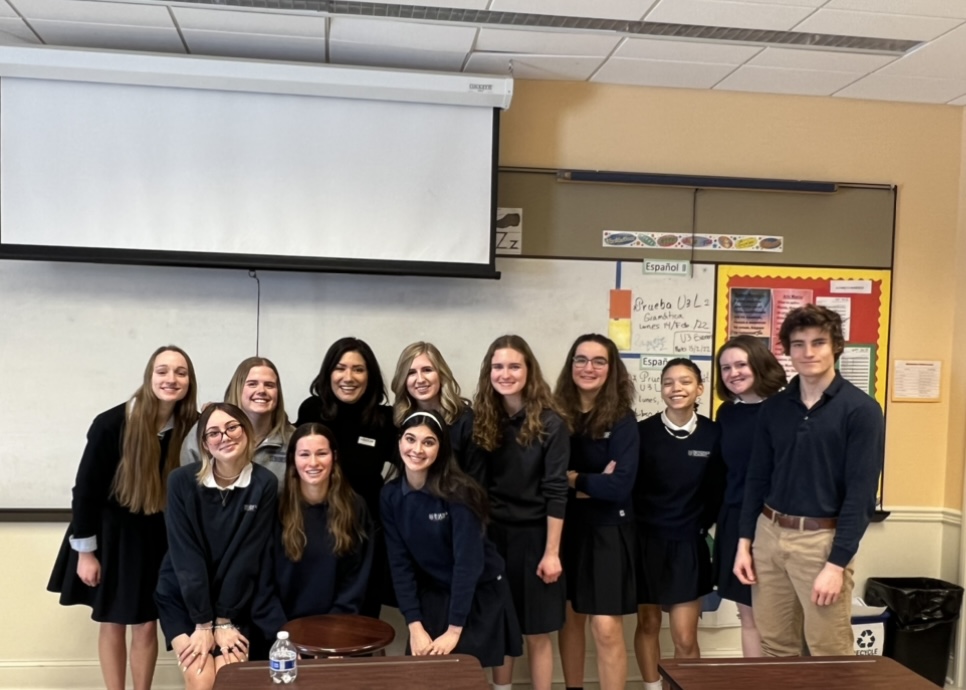 From learning about a journalism career to meeting a local celebrity, Providence Academy journalism students had a fun day on February 4, when Amelia Santaniello, WCCO’s nightly News Anchor visited their class to speak with students about day-to-day experiences in her field.

Santaniello has worked very hard over the years to get to the evening News Anchor position. She has lived and worked in Connecticut, Washington D.C., New York, as well as Pennsylvania. Twenty-six years ago she saw the WCCO position as a great opportunity to settle in one location, after traveling for much of her previous reporting career. Ten years into her time at WCCO, her husband, Frank Vascellaro, joined her as co-anchor, and the two became one of the only married news anchor teams in the country.

During her visit to PA, Santaniello did more than describe her day-to-day life on the job; she walked students through how she worked her way up in the field against fierce competition. Her first job was a production assistant for WUSA in Washington D.C., in the reporter trainee program, where she did behind the scenes work, such as conducting interviews and writing stories for the news anchors to report.

“I have moved around a lot over the years,” expressed Santaniello. “When I was offered the WCCO news anchor position, I thought it was the perfect place to settle down, get married, and have kids.”

Santaniello used her extensive experience in journalism to share wisdom with those students considering a similar path. She told the journalism class that news anchors have to be able to think on their feet, go with the flow, and be outgoing. She also warned that people in these careers need thick skin to ignore unexpected amounts of backlash. From receiving negative emails about her outfit to how she may have not covered a story well, Santaniello had to draw on personal strength to not let it affect her mindset.

“Something I never expected about my job is how thick your skin has to be,” explained Santaniello. “You just have to move on and not let it affect you.”

Santaniello’s relatable nature and personal stories made it easy for students to envision themselves in her position.

“I was really grateful to have the ability to put myself in her shoes and see how I would fare in her job,” stated journalism student, Ella Flynn, ‘22. “The most helpful part was when she listed skills that were extremely helpful in her career; that allowed me to think about what I want to do when I’m older.”

Adam Schmalzbauer, Chair of PA’s English Department, also attended Santaniello’s presentation and recalled the impression she made on the students. “Amelia Santaniello served as an inspiration to the young journalists; she was a great source for learning about the journalism field.”

From giving great advice about finding a meaningful career path, to sharing her journey in the field, Santaniello had a clear impact on the students by helping them develop their picture of real world journalism.