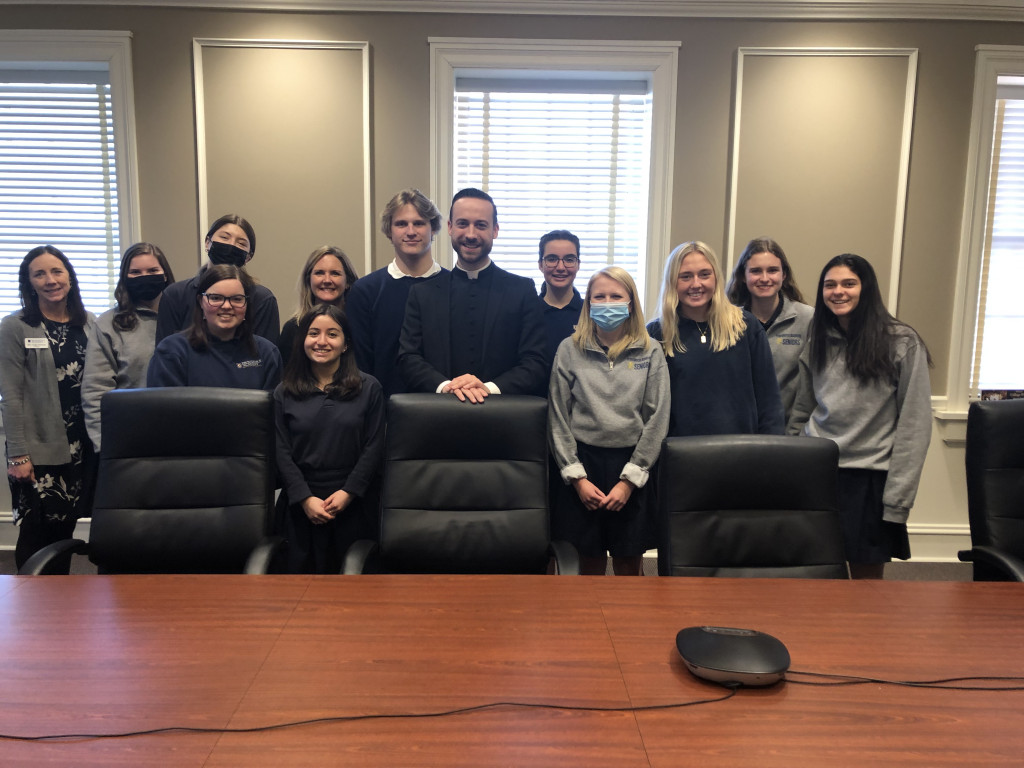 Picture this: thirteen different voices, shifting between English and French. This conversation didn’t take place anywhere near France, but rather in PA’s own board room with students who had studied through French V or through their senior year. Among this group was Father Garrett Ahlers, a priest who comes to PA annually to say Mass in French. On Tuesday, January 25, ten students, along with Madame Ann Heitzmann and Madame Angie Mahoney, celebrated the Feast Day of Saint Paul with a luncheon with Father Garrett Ahlers.

Four years ago, a new tradition graced the scene at PA. Students received the chance to attend Mass in the foreign language they studied. For one week each year, Spanish students attended Mass in Spanish, Latin students attended a Latin Mass, and French students experienced a Mass spoken completely in French. To this day, this practice gives language-learners the chance to use the skills they learn in-class in a real world setting.

“I organized this lunch because I thought it’s always interesting for students to have as near of an authentic experience as possible. So while everyone at the luncheon spoke English, speaking French with someone who has that experience was good for them.”

This opportunity could not have come at a better time. Due to COVID, 2020’s French trip has been postponed to summer 2022, leaving students still waiting for a chance to immerse themselves in foreign language and culture. Speaking to Ahlers helped fill this gap.

Sophie Koch, ‘22, commented, “Everyone speaks French differently – some slower, some so fast you can’t separate their words. Speaking with someone in French that you haven’t spoken to before is always an adventure!”

The luncheon brought something more than simple speaking experience: hope for becoming bilingual. While Ahlers speaks fluent French and frequents France once a year, he learned the language as an adult.

Ahlers shared, “We had two French classes in my high school, and they were abysmal. By the end of them, I could barely conjugate the verb être,” Ahlers laughed. “But during the summer of 2012, I did six weeks of French with a group of monks who were fluent. Those 6 weeks of studying formed a foundation that I just started building on. You can’t substitute true immersion.”

The prospect of sitting and conversing with someone who managed to become fluent as an adult made the task of learning an entire language seem tangible.

“It made me happy and gave me some relief to hear that he learned French later in his life–it gave me some hope that I will be able to improve my French and become more fluent in the future,” shared Olivia Bissonette, ‘22.

But beyond the educational benefits, the luncheon proved to be a fun time. As the conversation shifted between French and English, the students laughed about everything from English titles of French films to the beauty of cities in Southern France to watching the Marvel Universe dubbed over in French.

Heitzmann enthused, “I love the camaraderie of the group. It was such a positive time where everyone was using their skills to form a conversation. I would love to do that again next year!”