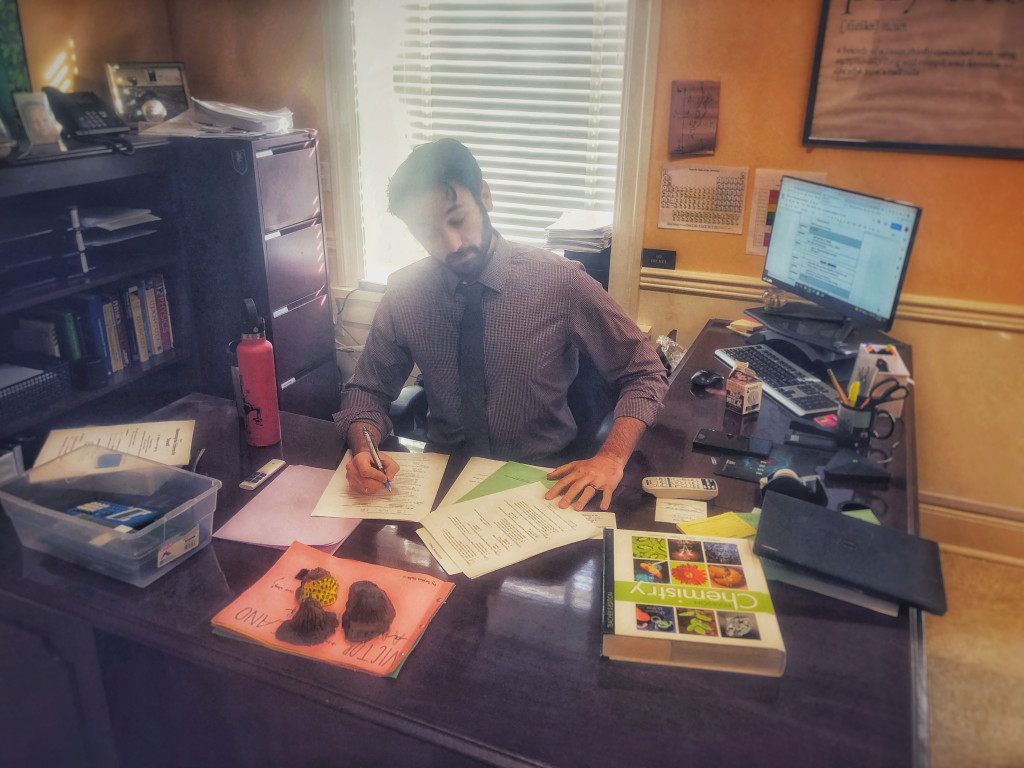 “Pray on it!” is the advice Religion Teacher Angela Jendro gives on preparing for finals. For students, finals season is full of late nights, caffeinated drinks, and lots of stress. This chaos is followed by six 90-minute exams on three different days, all taken in the school’s main gym. However, while many know about the student perspective, few people have questioned what teachers think about finals week.

Since our faculty has various educational backgrounds, not all teachers had finals in their high school years but those who did have some very distinct memories. Math Teacher Erika Greene recalls her own experience, saying, “I was always good at math, so I never studied for it. I just showed up and did it. I didn’t super love history or reading-intensive subjects, so I had to study a lot for those.”

Ann Heitzmann, the high school’s French teacher, said that she “only had finals in core classes, primarily math and science,” and Dan Hickel, a science teacher, says that his finals were “similar to Providence’s, but less intense.”

When it comes to creating final exams, every teacher has had a different experience for writing their first.

Dr. Jeff Biebighauser, who teaches English and Latin, uses one word to describe writing his first final: “Panic. I did not know finals were happening until two weeks before when my students asked me for a study guide. It was part of the learning curve of adjusting to teaching here. It was a bit of a panic, not that it was hard to write, but that was not the way I had been teaching. I wanted to be fair to my students.”

The main concerns teachers have in writing finals are their length, level of difficulty, and ability to synthesize an entire semester’s content into one test. Jendro agrees with this sentiment, commenting: “I try to find that balance between challenging and doable. A major goal is a synthesis. You want a way to integrate all of the units, and assess them all equally and fairly.”

Every teacher does, however, teach a different subject and in different ways, influencing the way their finals are structured.

Ian Skemp, Upper School History Teacher says, “I teach mostly senior history with students who are about to head off to college. I like to focus on the written aspect of the final. With the essay prompt, I want to glean an opinion out of them. A lot more focus on interpretation, not just regurgitation.”

As finals are meant to cover an entire semester, Jendro says that finals are “an opportunity for critical thinking. During the semester, you’re compartmentalizing. Finals take a step back and look at how all the units relate to each other.”

After supervising the finals for their subjects, teachers have to start the daunting task of grading. Hickel says, “It’s awful. Scantron is my best friend.”

With all the different formats, teachers also develop a variety of grading habits. Biebighauser says he “grades by class, and one student’s exam at a time.”

Other teachers follow a different pattern. “I always grade everyone’s first page, then everyone’s second page so that I’m giving the same amount of partial credit and for consistency. Also, this way, I don’t know whose page I’m grading,” Greene recounts.

Even with all the various decisions these teachers make with their final exams, there is one commonality: the best way to study. Heitzmann concludes, “Staying organized throughout the semester is essential because the more organized you are with your materials, the better you’ll feel when you sit down to study. I firmly believe in this advice: don’t cram, take your time, use time wisely, and get enough sleep.”