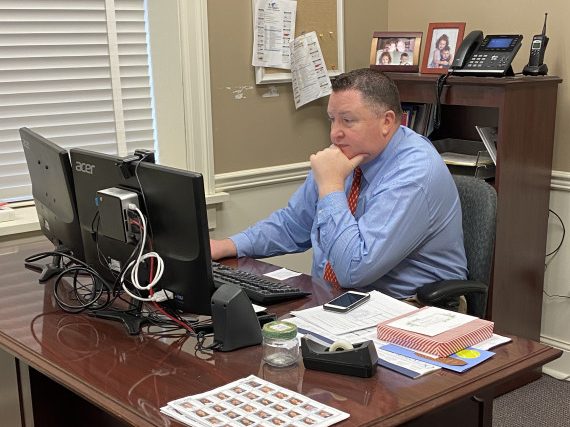 From building relationships with teachers to greeting people in the hallways, Mr. Kurt Jaeger, now permanent Director of the Providence Academy Upper School, made a great first impression in his first semester as the interim head of Upper School. Jaeger’s short term position was meant to be a bridge between Mrs. Harrington, former Director of Upper School, and a future face in the office, but Headmaster Dr. Todd Flanders announced in his “Headmaster’s Blog” on December 6, 2021, Jaeger’s position will now be permanent.

“Mr. Jaeger is such a great guy,” glowed Mrs. Kate Gregg, Upper School Administrative Assistant. “I have known him for years and have always had great respect for him. I was very excited to hear that he is now permanent.”

Jaeger could not be more qualified for his new role, given his long history at PA. He served as the Athletic Director for thirteen years and has taught in every division at the school. Jaeger has seen Providence through all of its changes and growth and even his family is deeply ingrained in the community. His children have studied at PA, and his wife, Mrs. Danette Jaeger, teaches third grade in the Lower School.

“One of the best things about coming back to PA is reuniting past relationships as well as getting to know new faces,” exclaimed Jaeger.

Jaeger is using his qualifications to make positive changes throughout the Upper School.  In his first semester as the Director, he began checking in with students in the hallways, talking to them at lunch, and communicating more with teachers.

“My favorite aspect of Mr. Jaeger is his friendliness,” stated Olivia Menzel ‘22. “He always makes a point to ask me how my day is going.”

Jaeger’s important position at the school does not come without challenges. The spectrum of his responsibilities – from managing students and teachers to letting parents know that PA will be closing early due to snow – can seem daunting. But Jaeger accomplishes the tasks set before him with ease and compassion, and he cannot wait to see where his new job will take him.

The PA community is very excited to see where Jaeger leads the Upper School; but one thing is for sure, it is in very good hands and its future is bright.