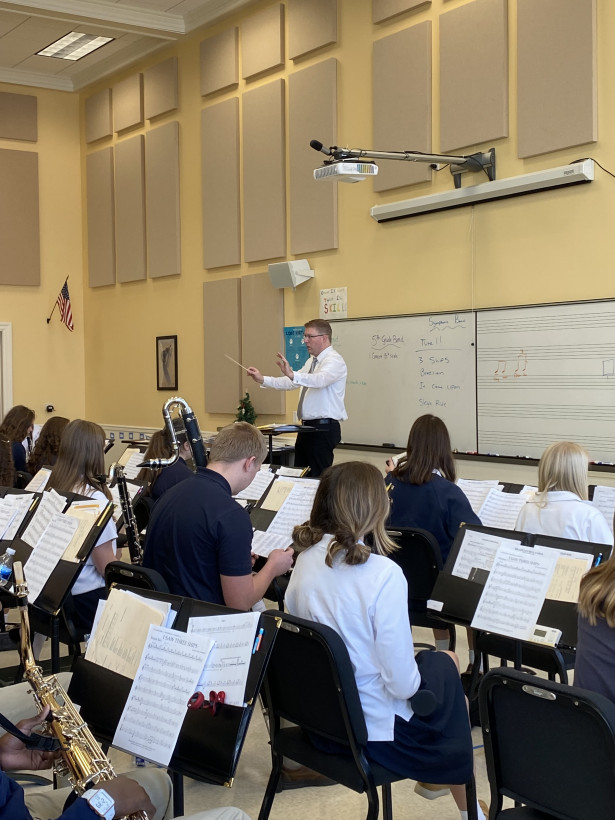 “From his energy to his cheerfulness, Mr. Jones is the best,” explained Macallister Clark ‘22, Providence Academy tuba player.

This sentiment is shared by many in the Providence community. Cheerful, caring, and highly competent are three ways to describe the Upper School Band Director, Thomas Jones.

Since he started teaching at Providence nine years ago, Jones has had many different roles. Last year, he served as Middle School Band Assistant, as COVID spacing regulations required the band to be split in half. As a result, Jones taught half of the Middle Schoolers each day, while Middle School Band Director, Mrs. Nicole Clark taught the rest. Jones is also Upper School Choir Assistant this year, helping keep choir students engaged in the songs. He even teaches Lower Schoolers, giving individual lessons to fifth grade brass players on Wednesdays.

In addition to these many responsibilities, Jones’s day is also filled with either lessons, monthly Aviation Club meetings, or weekly Upper School Jazz Band. In the afternoon, he will supervise his Upper School House Xi or Activity group depending on the day.  And after the 3:15 bell officially ends the school day, Mr. Jones will continue administering lessons or attending meetings.

The bulk of Jones’s day consists of the individual music lessons. Every band student has the opportunity to meet with him for ten minutes a week. Because of this, Jones will administer anywhere from around nineteen to twenty-five lessons per day. Throughout the week he will teach at least ninety-five lessons.

“I love working with each student individually,” glowed Jones. “It is so fun to see where each student is at in their musical journey and then be able to take that and comprise it into a band. It is the best part of my job.”

In between all the lessons, Jones gets to fulfill his main role of directing the Upper Symphonic Band for an hour.

“I love being a part of the Upper School Band,” articulated Gretta Martin ‘22, clarinet player. “Mr. Jones always has a positive attitude and makes every rehearsal memorable.”

Despite having an already full schedule, Jones still wants to do more. He likes working with the Symphonic Band so much he wishes he could have longer class periods. He also is advocating for a music course in which students could learn about all the different aspects of music as well as how it developed in different time periods.

No matter whether Jones is working with a student in a music lesson, conducting the band, or running the Aviation Club, the community can be sure that Jones will be on it with his usual energy and enthusiasm.