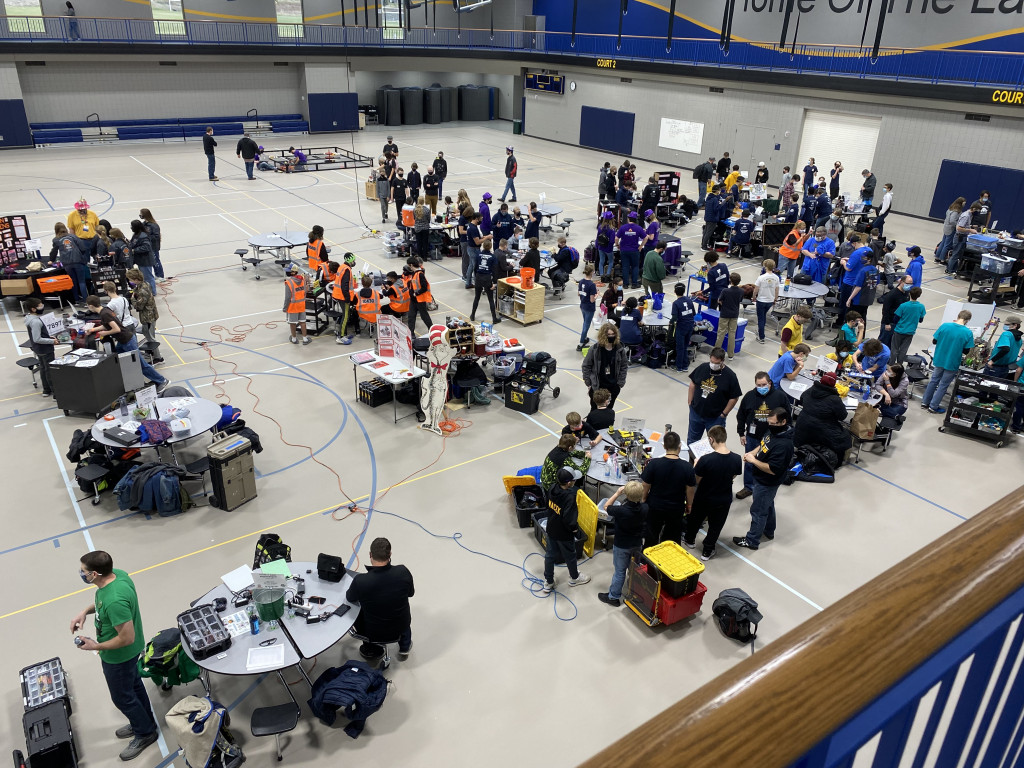 What has a claw, a motor, and moves on wheels? A monster truck? A portable claw machine? The answer: the robot built by the Middle School Robotics Team. On Saturday, November 20, 2021, Providence’s Robotics Team kicked off the season at Prior Lake High School with their first competition of the year.

Each year, teams across Minnesota are given a new challenge. This year’s challenge is called “Freight Frenzy.” Put simply, student-built robots score points by driving into different corners of an arena, picking up “freight”  — which are items such as rubber ducks, two inch square boxes, and wiffle balls, called “cargo” — and placing these items into specific places.

Inexperience was not the only challenge Providence faced. On Friday, November 19, an unplanned lock-down canceled all events at Providence that evening, including the team’s final practice. The four hour session, in which they were supposed to finish wiring and practice test driving, was cut to twenty minutes.

The mark of any good robotics team is problem-solving, and PA is no different. Physics teacher and Robotics Coach Michael Plucinski brought the unfinished project home to complete the last bit of wiring, and the new middle schoolers learned on the job, driving the robot for the very first time at the competition.

“They really powered through,” Plucinski beamed. “It was really cool to see them embrace the competition.”

Embrace it they did. During their six rounds, the team faced several unexpected problems. Their servo, or motor, broke, the drive train, which makes the wheels spin, ran out of battery, and the controllers disconnected from the robot. But PA still persisted. Between rounds, they made adjustments, driving their creation on the practice field. At the end of the day, they ended up with a functioning robot.

“My favorite part of the competition was when we won our first round,” Mason Gregory ‘27 said proudly, remembering how his hard work paid off.

This hard work and ingenuity caused Providence to secure nineteenth place out of twenty-five, an impressive feat for a group with little experience and time.

“I felt like it was a good competition, even though we didn’t place super high. This was our first year, and it was more about seeing the competition and getting that experience.” Plucinski reflected.

Maggie Ludlow ‘23, a Robotics veteran who helps the middle school team, added, “They did really well. They were focused and eager to fix the robot.”

Now that the team has experience and time to practice, they are confident that they can improve for their next competition on December 11th. Their plans? To practice driving, and to add an autonomous program, which will allow the machine to complete its tasks following a computer program rather than a control pad.

But the biggest goal is learning.

“My favorite part of robotics is seeing middle schoolers come in with a very blank slate, and watching them grow throughout the season.” Plucinski reflected.

This team is full of potential and excitement as they look to the future of PA robotics.