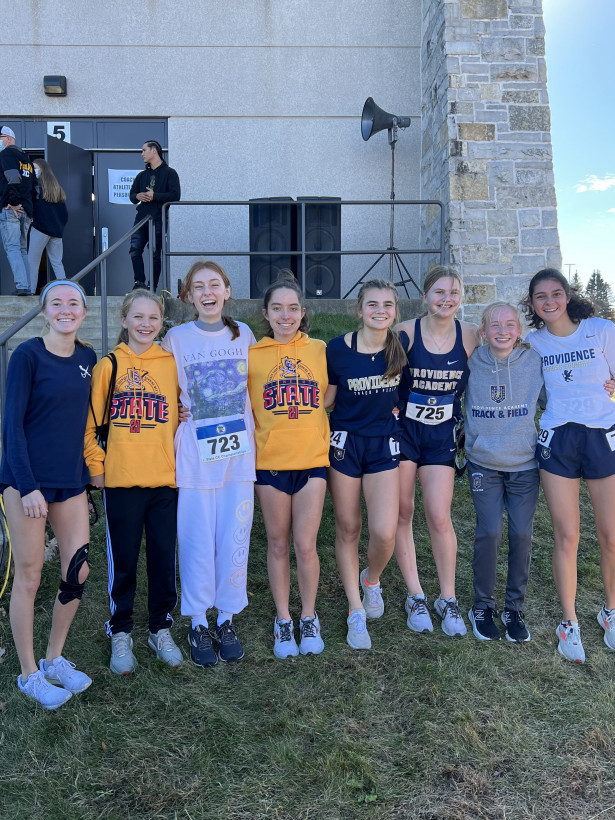 Saturday November 6th was a typical sunny and cheerful day. But, for our girls’ cross country team, it was also the day of the Cross Country State Tournament at St. Olaf College, which they had previously qualified for by placing second at the section meet.

The 2021 season has been marked by the girls’ outstanding performances and determination. As a testimony of their excellence, the girls placed thirteenth out of all single ‘A’ teams in the state. Captain Sophie Koch ‘22 said, “We ran this race as a celebration of the season.”

This is not the first time the team has run at State. The girls qualified in both the 2018 and 2019 seasons, where they also had very successful runs. Three girls on this year’s team also competed on those previous teams: Koch, Emma Kelly ‘22, and Aly Marshall ‘23.

At this state meet, Kelly finished the race in 23rd place, earning her the title of an All-State Athlete.  Other strong performers include Marshall, and Leni Kuhn ‘26, who both placed in the top 100.

This was the first state meet for Kuhn and half the team, yet the girls did not let this cause them anxiety. Kuhn commented, “The atmosphere was relaxed. The race itself wasn’t scary, but the large crowds were nerve-wracking.”

“Everyone was very positive before the race and their energy was calm,” Coach Dan Hickel agreed.

Instead of focusing on the crowds or the competitive atmosphere, the girls focused on their bond as a team. They started this process the day before by having a pre-meet pasta party to get excited for the race. Koch remarked, “We like to focus on coming together as a team that always supports one another.” Kuhn elaborated on their bond, commenting, “After the race was over, I wasn’t thinking about myself, but how we got to run together in our last meet as a team with our two senior captains. I am so proud of them.”

The girls’ captains, Koch and Kelly, performed in the final meet of their high school cross country career, but the future’s looking bright for them, as they both plan for the next steps of their lives in college. Even though the absence of their talent will be a loss for the team next year, the girls have great prospects for the upcoming seasons. Hickel agreed, stating, “We have a young team with a lot of leadership and talent. They possess the mindsets of long-distance runners, which is a great promise for success.”