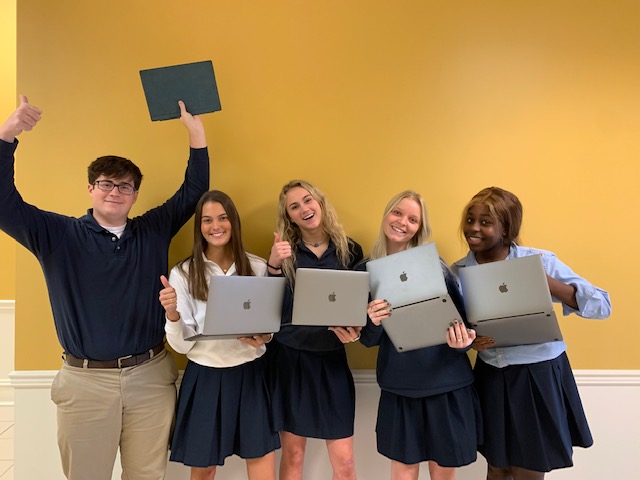 “Eye-opening,” commented Jimmy Fafinski ‘22 when asked what word describes the college application process for him.

“It broadens your perspective on things,” he continued. “You really have to know who you are. You need to figure that out first, before you begin applying to colleges.”

November 1st was a day Seniors both dreaded and anticipated for months. While “stress” is an obvious buzzword associated with this momentous day, “relief” is another, as the day brings the completion of college applications for many.

Most Providence Academy Seniors felt precisely these things for the majority of October. Seniors endured each school day like stiff, drained versions of themselves. They had one goal: to make it past November 1st with their sanity.

The hallways were filled with sighs, cries of help, complaints, and frantic conversations. One could truly see the tension in the air, it was all-encompassing.

“It’s extremely nerve-wracking. What if you don’t get into any schools at all? It’s always something in the back of your mind,” confessed Sophia Menzel ‘22.

Luckily, the frightening day has passed. Celebratory cheers have replaced pleas of help and animation has replaced rigidity. If overcoming the mountain of November 1st has taught PA Seniors anything, it’s that they can tackle whatever comes their way.

However, the journey isn’t over yet. While some seniors feel relieved, others say the stress is just beginning.

Chungu Mulenga ‘22 openly admitted, “For me, the application process wasn’t that stressful.  I think waiting to be accepted is much worse.”

All 12th graders are at different points in the process. A small number had no November 1st deadlines and have yet to submit any applications. Most seniors are waiting to hear from colleges; however, some have already been accepted and a few have even committed by now.

Committing to college comes with many rewards, one of which is placing a pin on the map in the Upper School Atrium. Every year, members of the National Honors Society at PA hang a map so seniors can place a pin where they will be next year. By the end of the year, the map is a beautiful illustration of the Class of 2022’s future plans.

“It’s such a cool tradition. It feels like you’re taking a step toward your future and cementing your decision for the next four years. Pinning it on the board makes it real,” reflected Emma Kelly ‘22, who placed her pin last Friday.

As of Monday, November 8th, the map already displayed four out of the sixty-nine necessary pins. Minnesota, Illinois, California, and Virginia are the four proclaimed destinations.

Whether they felt stressed, relieved, or overwhelmed by the November 1st deadline, the Class of 2022 endured the college application process together. It was a period of growth as well as an opportunity to help one another. They overcame the obstacle together, which made it much easier to swallow.

“More than any previous class of seniors, I see so many students working together,” Upper School Math teacher Mrs. Karen Ostaffe noted after writing recommendation letters for nineteen Seniors.

“This will serve them very well in college because they’ll need to collaborate in order to succeed,” Ostaffe continued. “And I believe they are up for the challenge.”