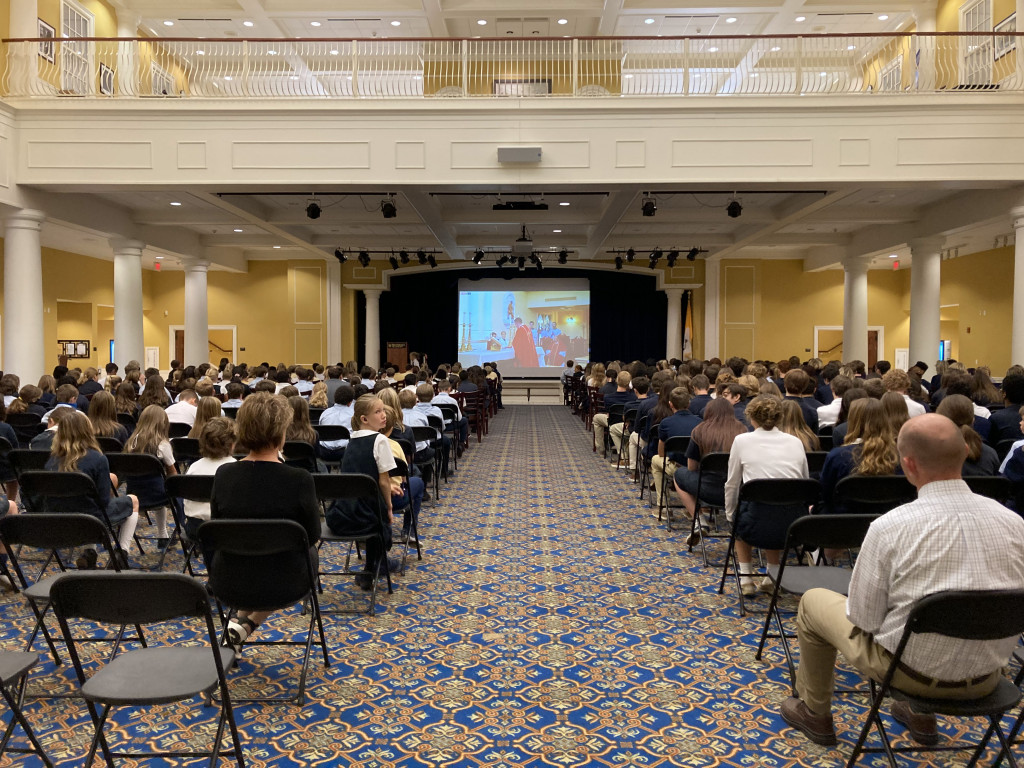 Pulling into the main drive at Providence Academy, the eye is naturally drawn to the architectural center of the school. The light in the cupola, as the sanctuary lamp in the chapel beneath it, stays lit year round. Monday, October 18th, Archbishop Hebda celebrated mass, marking 20 years since the consecration of that chapel, the first lighting of the sanctuary lamp, and Jesus’ presence in the Tabernacle ever since.

In 2001 when Archbishop Flynn [of blessed memory] consecrated the chapel, Mrs. Melissa Krcil, Lower School reading and learning specialist, was a 3rd grade classroom teacher in attendance. “There was a lot of anticipation and unknown because not many of us had ever been to a consecration of a chapel before so we weren’t sure what to expect,” she recalled.

Founding faculty member and Director of Academics and Curriculum, Mr. Michael Tiffany remembered, “Excitement and joy were in the room and among us; we knew [the consecration] would be remembered in history, so it was cool to be able to witness it.”

Krcil continued, “There were a lot of firsts that inaugural year, yet this stuck out as a very memorable event because it is the focus of why we are all here.”  She noted, “ To be able to take time to center us on Jesus, on our mission, amidst all the other firsts, was very special.”

In twenty years’ time, much has changed in the aesthetics of the Chapel, the school. “When we started,” Tiffany shared, “[the Chapel] was very bare bones; nothing was painted.”  He added, “Since the consecration, the footprint of the school has changed a great deal; some parts present now weren’t even part of the school when it was founded.”

But taking the time to stay centered on Christ remains a priority for the school, as was evident by the efforts put forth to organize Monday’s mass. With just over 200 students in 2001, the whole school fit in the Chapel with room to spare. With current enrollment at over 900, accommodating the current student body, along with faculty and staff, was a challenge.

The reordering of schedules across all three divisions, facilitation of participation from all students and staff, and logistics of offering Holy Communion in the Chapel, Great Room, and classrooms where the ceremony was Simulcast, were just a few considerations in preparation for the Mass and the visit from the Most Reverend Archbishop.

With his characteristic generosity of spirit, Hebda reiterated the importance of sacred spaces. “We are Incarnational,” he observed. “We believe not only that Christ is present in the Blessed Sacrament, but also in the Word proclaimed, in the Altar, and among us gathered as Christians.”

Sacred spaces like our chapel, “ground us as Catholics and help keep us focused on what is important. [Here] we join ourselves in history to the founders of our faith,” added Tiffany.

Though much has changed since the Eucharist was first received in the Chapel, that groundedness, that sense of center is of timeless, indeed eternal importance.  Here, Hebda hopes students are rooted in Truth, centered on Christ, and “receiving the foundation to face challenges in the world beyond.”