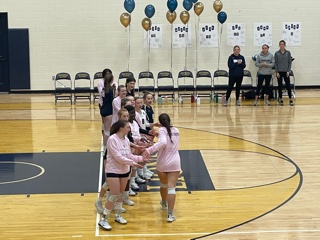 When the class of ‘22 graduates, the Lady Lions volleyball team will have some shoes to fill.  Lady Lions volleyball coach and former collegiate competitor Ms. Erika Greene describes the six seniors on this year’s squad as having “strong leadership and energy roles” as well as being “great contributors to the team.”  Those qualities were clearly on display last Tuesday night October 12 when the Lady Lions hosted their last home game of the season against Mounds Park Academy. The lady Lions fell 0-3 but not without a fight, putting their record at 7-10 headed into sectionals.

Senior night started off the traditional way with a prayer, the national anthem, and recognition of each senior by name. As the younger players cheered from the sidelines, Maria Counts, Paige Meadows, Elle Wiederholt, Kylie Onserio, Anna Leuer, and Liz Mogere made their way to the front center of the court. The team’s seniors surely felt the crowd’s appreciation of their hard work this season and throughout the careers at Providence.  Even though the Lady Lions didn’t walk away Tuesday night with a win, this season has still been one to remember and brought cause for celebration of other accomplishments.

Greene emphasized, “One of our goals this year was working on consistent team playing rather than individual playing.” The Lady Lions not only met this goal but surpassed it. Their collaborative efforts on the court led to their winning second in Conference and going into Sections this November. These players not only showed Greene they were capable of reaching their goals, but demonstrated several different things throughout the season such as lessons on determination, energy, and leadership.

Another triumph of this group is the acceptance of everyone on the team. The varsity squad represents 8th through 12th graders; with such a wide age range, team bonding can be challenging. Looking back over the season and the team’s dynamic, Greene said, “I was surprised at how close the team was off the court.” The girls could often be seen talking, laughing, and hugging in the halls throughout the school day.

Connections, respect, and collaboration may not come naturally to players across so many grade levels, but this group of girls only saw each other as part of the same team, rather than divided by grades.

Meadows’ encouragement, advice, and hope for all the younger players is to, “ just soak up every single moment of the sport you love, but also all aspects of school.” She continued, “Providence provides so many opportunities that come along with meeting some of the best people, and everyone should take those opportunities.”

Meadows concluded, “As far as volleyball goes, continue to build tight bonds with your teammates in all different grades because it brings a new aspect to your life that you will cherish forever!’