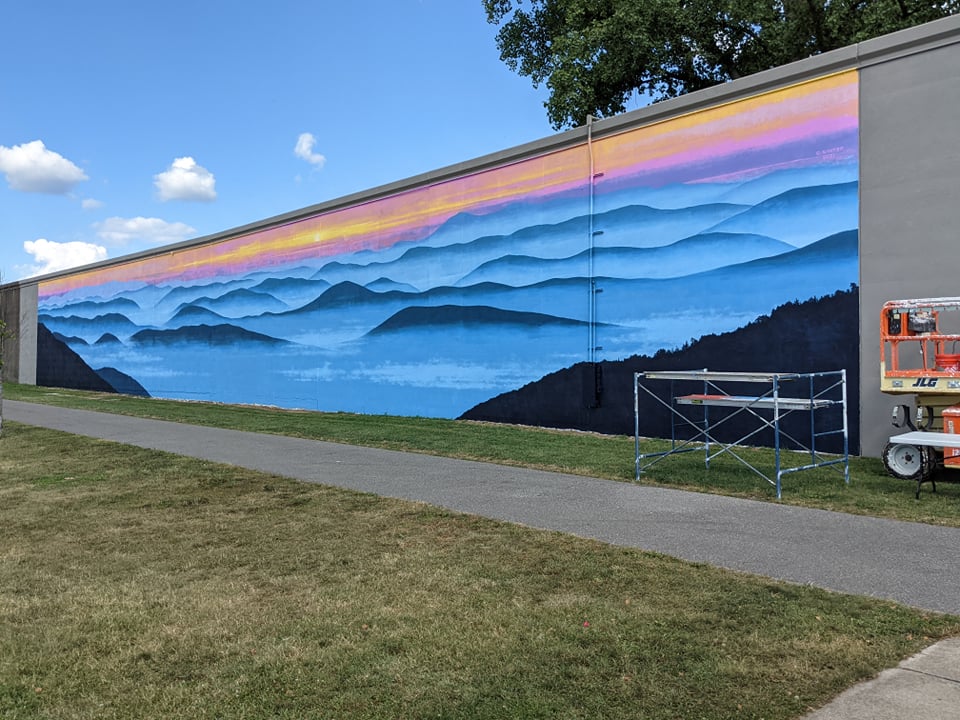 Over the summer, Providence Academy art teacher Mr. Christopher Santer, painted an impressive mural in Parkersburg, West Virginia. Santer often is commissioned to do projects outside of school, juggling these with his job here at Providence and spending time with his family.

This incredible mural added a new degree of character to the quaint river town. The painting depicts a beautiful mountain range covered by mist with a backdrop of a scenic sunset.

Parkersburg is special to Santer because it is his hometown, where he lived for most of his childhood and his family still resides. Parkersburg local and friend of Santer, Mr. Edward Escandon, first reached out to him to paint the flood wall in 2018. The city was allowing people to hang advertisements on the floodwall, which wasn’t very picturesque. Escandon saw the wall as a blank canvas with great potential, but it was essentially functioning as a billboard.

Escandon commented, “[I chose Santer because] I knew the scope of this project would require the highest technical skill over and above a winning artistic vision.”

He continued, “Chris was my number one and only choice, if I could just get him interested. Chris having roots here in Parkersburg has been a huge multiplier of the energy and passion he has brought to the project. ”

Once he agreed to the take on this task, Santer began planning out sketches for possible layouts. Then he spent months working to plan and scale the model of the painting. He began with a small collage sketch, then moved on to painting a 1/20th scale canvas. Many students will remember, in 2018, this painting was displayed in the atrium while he worked out the colors and composition. One of the final steps was to design a ten by twenty foot painting to practice blending.

When asked what the biggest difficulty would be in preparing for the summer, Santer answered, “The unknowns. The wall was twenty feet high and I didn’t know how it was going to work on the lifts. All those question marks were the challenge.”

After his arrival in West Virginia, leaving his family behind in Minnesota, Santer spent six hours of his first day on the job laying out the grid with a pencil and level. It then took three additional hours to paint the major lines.

Santer invited a local teacher, Abbie Burge, her current and former students to help with this intimidating endeavor. Eight students participated, spending their time painting base colors in large areas and blending out the colors.

When Ms. Burge was asked how the experience affected her students she responded, “Being part of a community project like this helps students connect with their communities, and it instills pride and ownership of their hometown.”

Burge expressed, “Students were also able to connect with other artists and do a bit of networking.  It was a valuable experience for them to meet a commissioned artist.”

The project received a substantial amount of local media coverage. Santer was interviewed twice for the local news and appeared in the paper three times.

In all, the project took 11 hours of work, six days a week, for three weeks until it was complete. The final product was a truly spectacular scene and a milestone for Santer as an artist.

“Being able to work to that scale was a new one for me and the wall was far more textured than I thought, so I had to adjust to a thick primer texture. It was a thrilling experience,” Santer concluded.