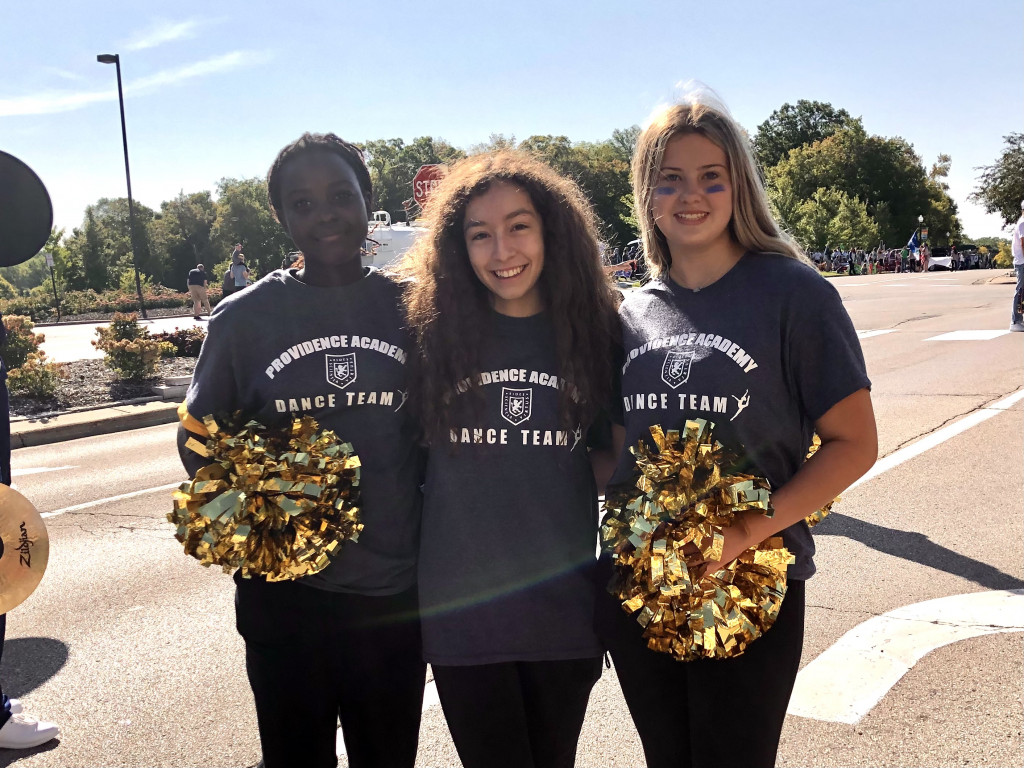 A giant balloon shaped like a lion’s head. Volunteers sporting yellow PA Spirit T-shirts. The marching band playing famous tunes. This year’s annual Plymouth Parade was alive with friendly faces and Providence Pride. But most noticeable were the girls marching ahead of the band with pom poms, dance routines, and T-shirts that read: “Providence Academy Dance Team.”

While there were no judges, stage makeup, or even a scorecard in sight, Saturday, September 18th was a big day for this dance team. In fact, it was the very first day. For the first time in its twenty year history, Providence Academy now has a dance team competing in MSHSL events

The creation of this team has been a long time coming. In the past, students interested in dance haven’t had an opportunity to perform competitively for PA. Instead, their dancing outlet consisted of the Spirit Squad—a small group of girls who lead cheers at football games—and gathering support for an official dance team.

This didn’t seem possible until Second Grade Teacher Tasha McMorrow joined the faculty. When she joined the PA community two years ago, McMorrow had nine years of teaching dance under her belt, having taught at Duluth Marshall, St. Cloud Cathedral, and Anoka.

McMorrow’s skills came to light when she choreographed the Safety Dance music video, the iconic clip posed at the end of last school year to celebrate the safe navigation of the tumultuous school year during COVID times (linked below). After this put her name on the map, McMorrow finally got approval to start the team, which now boasts nine members.

The PA community is thrilled about this new addition.

“I’m excited to compete; dance is my favorite thing in the world,” enthused Danielle Kukuljan ‘24, captain of the new team.

McMorrow echoed her excitement, “Parents scream and cheer the whole time during a competition, which is something you can’t get at a formal ceremony on a stage.”

An energetic crowd is not the only thing the dance team has in common with other MHSHL sports. Dance is a winter sport, starting in October and ending in February. It will function similarly to other sports as well, with after-school practices, weekend competitions, and even silly team bonding activities.

Being their first performance for PA, the Plymouth Parade showcased for the first time the girls’ passion and dedication.

“My biggest takeaway from the parade is that people see we’re a team now; it brought more awareness,” reflected team member Annika Bruce ‘24.

Now that the team has been established, the next goal is to build it up. It is starting small, with only a jazz team, but hopes to add a tap group in the years to come.

But that is not the team’s only wish for this year.

McMorrow reported, “I hope to establish a strong program where the girls grow and learn what Minnesota dance team is all about, and to get the whole school ready to cheer on the Lions Dance team!”

For more information about the dance team, contact Mrs. McMorrow at [email protected].