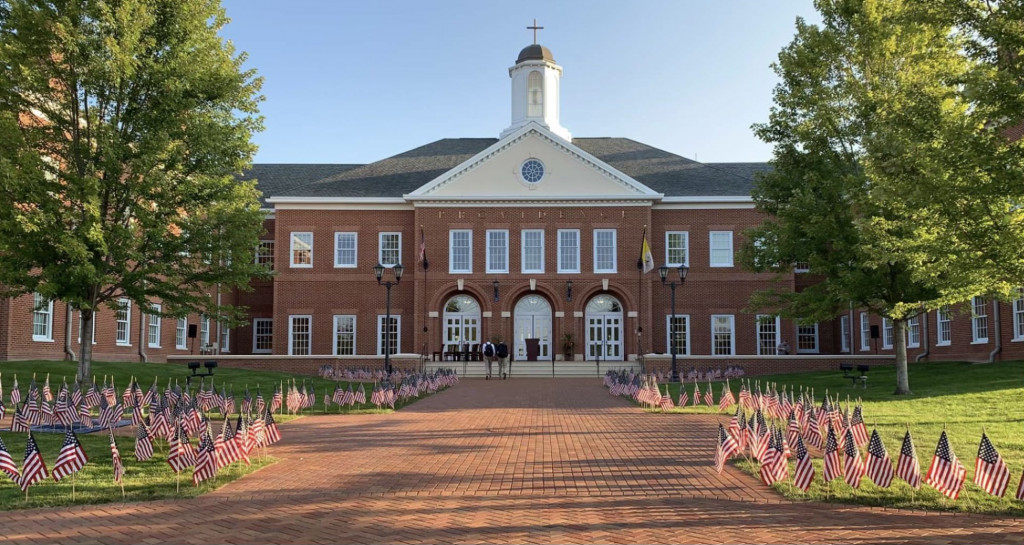 The beginning of this school year marks a momentous anniversary for Providence Academy.  Two decades ago, a brand new campus welcomed students for the first time. But another 20th anniversary casts a mournful shadow over an otherwise jovial occasion: September 11, 2001. Last Friday, in their yearly tribute, Providence Academy students and staff honored local first responders and remembered the 2,977 American lives lost in the 9/11 terrorist attacks.

Headmaster Dr. Todd Flanders added, “It is certainly an honor to hold this ceremony each year at Providence Academy. This tradition began so organically and it truly is the students that have made it the event it is.”

Fire trucks and police cars processed through, as has become the tradition, looking out over the silent students standing solemnly with their hands over their hearts. This year’s ceremony, however, went beyond the salute to first responders. After the procession, emergency personnel parked their vehicles and joined the students in front of the school to hear guest speakers and a performance from the Upper School band.

Providence Academy’s commemoration is unique among schools, indeed in the community at large. When Plymouth Mayor Jeffry Wosje was asked if he had several other 9/11 ceremonies to attend over the weekend, he replied “No, this is the only one. I wish more organizations would do something, but Providence is the only one, and it means so much to our first responders.”

The commemoration certainly meant a lot to Captain Robert Topp of Plymouth. He reflected, “Being a police officer is definitely a tough job. Seeing a tribute like the one held at PA is so rewarding and it truly restores my faith in humanity.”

Captain Topp continued, “…it shows the patriotism everyone at Providence Academy holds. I wish the whole country would go back to the patriotism and unification shown immediately after 9/11.”

But no student in the building today was alive to witness the tragedy or recall the kind of solidarity Captain Topp longs for.

Flanders noted, “It is crucial we teach the younger generation to love what they ought to love; we must present young people with a recreated understanding of what it was and is…a ceremony like this instills in all of us what nobility is.”

First grade teacher Mrs. Erin Lee echoed, “Patriotism is such an important value at Providence Academy.” Lee reflected that, from a young age, “we must show students the true importance of the virtue of patriotism, not just tell them. A ceremony like the one held this past Friday allows us to do so.”

First grade teacher Mrs. Robyn Steinbrueck remarked, “If students don’t leave Providence with a love of country, God, and life, they have missed the boat. Providence strives to live out these values in everyday life; the 9/11 tribute is one way we honor them.”

Flanders recalled, “In 2001, as a new institution, we had elements of our mission in place. Those core values were attacked on September 11. Articulation in defense of those things– freedom, virtue, selflessness–has been an integral part of our mission, our identity, ever since.”

The keynote speaker of the ceremony–and a highlight for many in attendance–was Detective Alex Johnson ‘05, a member of the first graduating class of PA. Now working in San Antonio, Johnson emphasized the value of these formative years for students: “It is in these classrooms and in the chapel upstairs where you learn about those truths that are worth devoting your life to. It is here you can find and grow to love those things that are worth defending with great moral, spiritual, and physical courage. It is here you don the armor used to face the dragons in this world.”