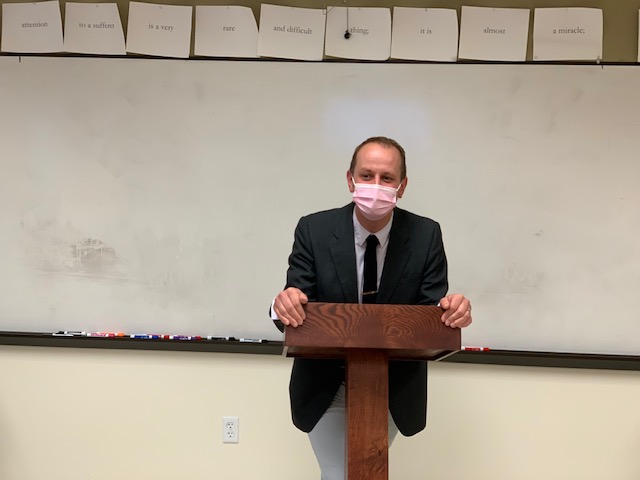 For anyone who has encountered Biebighauser, this may come as a surprise. One would not suspect this passionate and devoted teacher to have previously portrayed a “too cool for everything” attitude.

Biebighauser, more commonly known to students as Biebs, felt somewhat insecure as a high schooler. As a result of transferring halfway through high school, Biebs’ life was abruptly transformed. This interruption of his high school career and uprooting of friendships caused him to feel misunderstood.

However, in the midst of this tumult, Biebs’ teachers were able to make a positive impact on his life.

“I saw the value of my smart and funny teachers who reached into the awkwardness of my adolescence to connect with me,” Biebs warmly reflected.

Although the insecure undertone of his high school career was difficult to overcome at the time, it offers Biebs the opportunity to relate to students in ways that many teachers cannot. This “insider information” gives him a unique view into the lives of students.

“My own high school experience makes me try to look out for kids whose talents haven’t been discovered yet,” Biebs wholeheartedly expressed .

As the only PA instructor teaching all 9th grade students, Biebs is in an ideal position to guide teenagers on the path to who they want to become.

For example, “knowing yourself” is a fundamental theme the insightful literature teacher emphasizes to 9th graders. He pushes students to think critically about themselves in relation to the works they are reading.

Val Fish ‘21 recalled a conversation with Biebs in which he commented that he tries to emulate Abby Cadabby, a popular “Sesame Street” character.

“‘I don’t actually think I sprinkle magic through the air and make other people magical by recognizing the magic that’s already in them,’”  Fish recalled Biebs candidly admitting. “‘But,’ he went on, ‘I find Abby inspirational in precisely those ways.’”

Although Biebs cannot shower PA’s yellow halls with magic in a literal sense, he does something even more remarkable. Similar to Abby Cadabby, he has the exceptional ability to empower students by helping them recognize the talents they already possess.

Biebs recalled a powerful moment in his career in which, through tears, a student’s mother thanked him for connecting with her son. She expressed that Biebs had transformed her son’s perspective of high school from one of disorientation and exclusion to one of accomplishment and self-confidence.

Mrs. Amelia Hejna, Biebs’ friend and colleague in the literature department of 5 years echoed this sentiment, “He embraces teaching as his vocation, not simply his job. He sees teaching as mentoring and wants to walk with students on their personal journeys.

The dented water bottle Biebs’ carries daily exemplifies key aspects of his teaching style and outlook on life: we’re all a little bruised, but that doesn’t mean we should be discarded. The dents simply show that we’re broken in, which is beautiful.