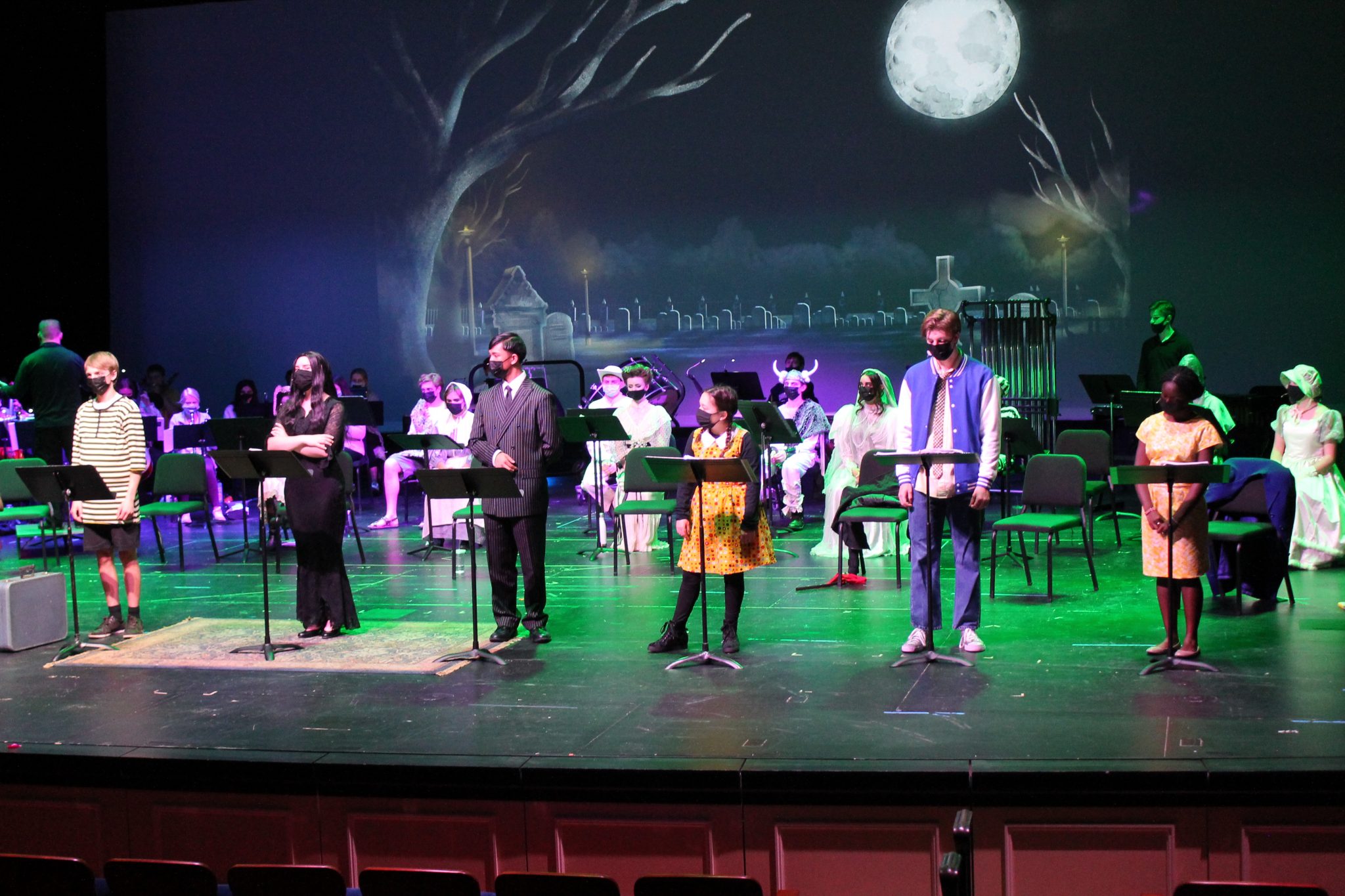 Going to watch a play is one of the most enjoyable activities in the world. At Providence especially, the Drama program takes great pride in their productions. But even theatergoers may be in the dark when it comes to all the work leading up to opening night. In addition to the hours of practice put forth to memorize lines–to say nothing of music rehearsals and costume design–the performance itself demands a certain poise under pressure that many would find impossible to uphold.  This year’s Spring production, The Addams Family, is a perfect example of those typical preparations, and then some.

“[In the year of Covid] We changed a couple of big things; instead of a traditional musical [with a lot of movement] it’s a concert,” director and theater teacher Mrs. Simmons remarked.

The distancing guidelines prompted adaptations that allowed Providence to move forward with the production, rather than having to cancel altogether. Changing from a musical template to a concert version not only meant omitting dancing in this year’s play, but also eliminated the need for multiple set designs since there won’t be any scene changes.

Without any dance numbers, with fewer songs, and particularly in the absence of scene changes, the audience will find the welcome addition of a narrator.  Val Fish ’21 paints verbal scenery, calling the audience members to imagine various backdrops throughout the play.

“It was initially confusing to me that this character was added; I thought the projections would be sufficient,” noted the veteran member of performing arts.

“But Lupe Addams [the narrator] provides another source of dark humor in this production and forms a kind of solidarity with the audience, unabashedly pointing out the unfolding eccentricities,” Fish reflected.

Many actors find the concert version less stressful because they are allowed the use of their script throughout the play. But even with a script on stage, performers try to memorize most of their lines, and the time invested adds up quickly, especially during tech week.  Rehearsals could last until 9:30 PM as the cast runs tirelessly through every song with the full pit band and a practice run of all the lighting and sound effects.

Commenting on his methods for rehearsal, James Herrera ’23 shared, “I go to a quiet spot in the house or outside and usually go through the entire script once, seeing how it goes, or I go to specific parts of the scripts where I had big trouble in singing or acting.”

Main cast members like Herrera have to do blocking rehearsals, or dialogue practice, in their place on stage. The blocking rehearsals push actors to polish their teamwork, one of the more difficult components of a group production.  “You have to make sure your parts fit in with the other parts,” said Mae Monette ‘21, another member of the main cast.  Timing, rhythm, and vocal blending were some of the main focal points last week.

Characters play their part convincingly not only with what they say, but what they wear as well. “Costumes are a key part in telling the story and signifying to the audience certain things about a character,” commented Sarah Huebschen ‘23, a member of the cast and design team. The design team goes through extensive research to find the perfect costume for each member of the cast.

After weeks of preparation, efforts culminated in a private showing of the Addams Family last Friday night.  There won’t be any public showings of the play but it will be available for viewing (for $20) beginning later this week and through the rest of the school year.  The link will be published in the Ebulletin.