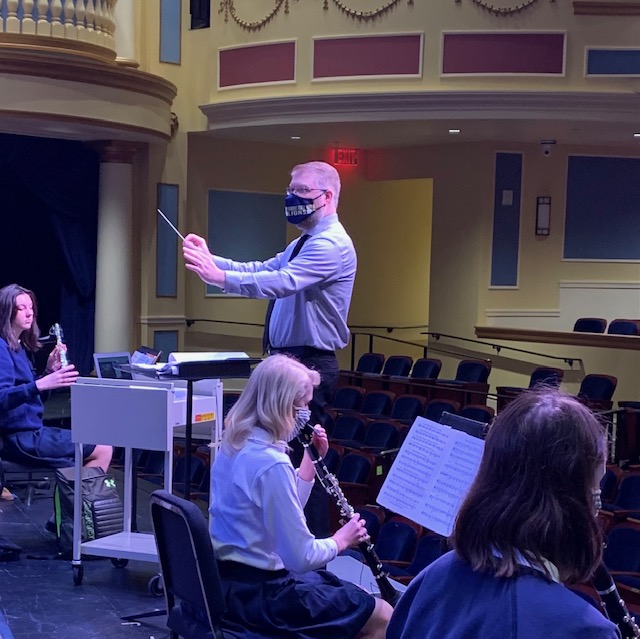 “My years in high school were formational. There was of course a lot of academic progress, but also social progress and learning a lot about life.”

After spending time looking back on his years in high school, many things stood out to Jones. Not surprisingly, his time in band was at the forefront of his memories. From enjoying concert band with friends to playing in the drumline, he fondly recalls the music that permeated his academic career and countless hours in rehearsal.

Another prominent memory of Jones’ high school career was the environment his school provided.

“High achievement was expected, but there was a relaxed atmosphere at the same time,” noted Jones.

This was impactful for Jones because it helped him thrive both as a student and young adult. He is thankful to have had every resource at his fingertips, while also never experiencing the burden of someone hovering over him.

Jones reflected, “It gave me guidance and structure to point me in the right direction, but also gave me space to find myself”.

Jones’s years in high school gave him the tools to succeed later in life. As a band director now, not only does he look back fondly on the musical aspect of his time in school, but also on the experience as a whole.

“Enjoy people and their company, whether they agree with you or disagree with you. Just enjoy different people,” reflected Jones.

For Jones, his high school years were very positive overall. He graduated having learned not only what was required of him academically, but also about himself and how to succeed in college. He advises students currently in high school to strive to discover who they are and what they believe in. From there, he says to be confident in those discoveries and seek out friends and opportunities that reinforce those beliefs.

Being on stage is a norm for high school conducting, but it had a curious beginning for Jones. While in high school, he had a unique opportunity to air on TV. Although excited about this accomplishment, Jones felt awkward when his principal decided to broadcast the segment to his entire school to watch during class.

Despite later being voted “most likely to be on TV” by his classmates, Jones still recalls the incident with a touch of embarrassment.  He humorously offers a final word of advice to students, “If you know you’re going to be on TV, don’t tell your principal about it.”