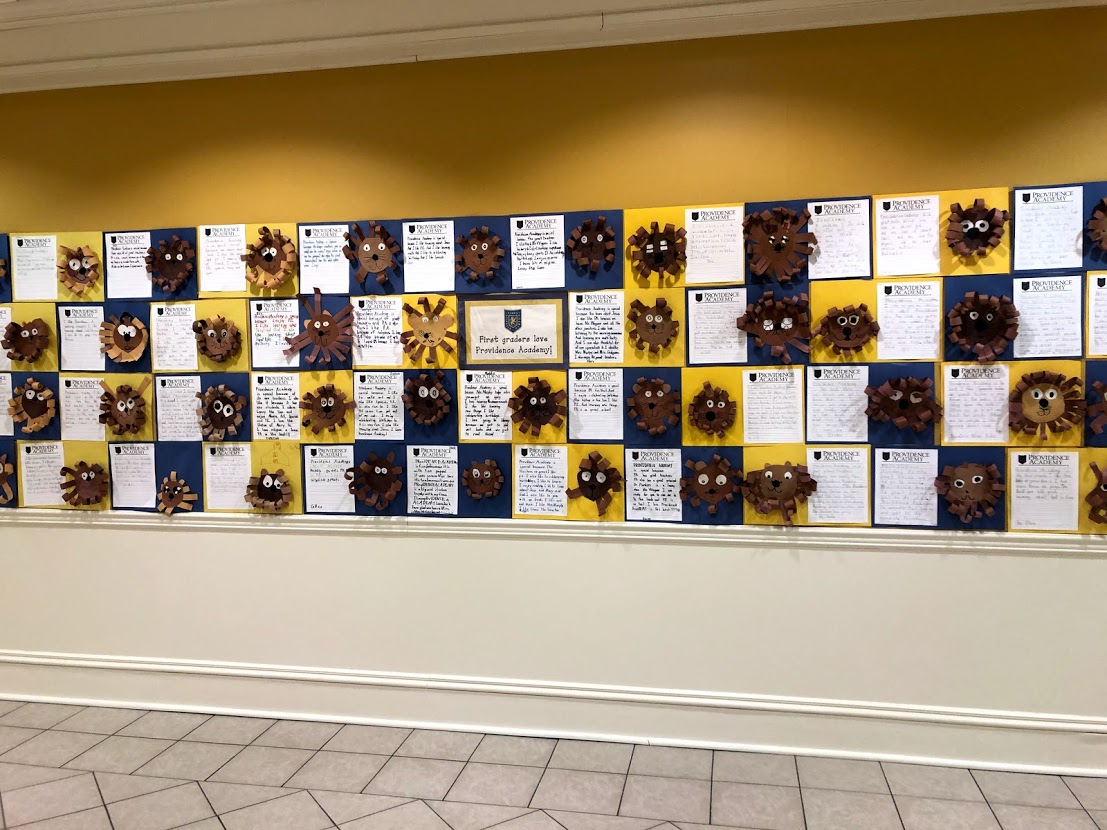 Every year Catholic schools around the nation look forward to the celebratory events of Catholic Schools Week (CSW). During this week, Providence Academy’s Lower School in particular cultivates fun and faith with its traditional activities and out-of-uniform days. From classroom bingo to a magician show, themed dress-up days to guessing how many starbursts filled the library candy jar, PA’s youngest students enjoyed the CSW festivities last week.

Lower Schoolers had the opportunity to partake in four themed out-of-uniform days. Students dressed up in their designated class color (red, blue, purple, or green) on Tuesday, in patriotic colors on Wednesday, spirit wear on Thursday, and a sports jersey on Friday. Second Grader, Calvin Connelly, commented that his favorite theme was Jersey day.

Mrs. Sarah Evens, a kindergarten teacher, stated, “My favorite part of Catholic Schools Week are the dress up days. It’s fun to see the kids get creative with what they wear!”

In addition to festive themed dress days, Lower Schoolers also had multiple opportunities to win prizes of different sorts throughout the week. Students decorated a medallion in advance of Catholic Schools Week and were assigned a number which was then put into a raffle. At the beginning of each school day, Lower School Director Mrs. Nancy Galgano picked two numbers per each class of each grade. Lucky winners picked a prize from the treasure chest in the Lower School office.

Galgano reflected that the medallion raffle is her favorite part of the week, “I get to be a part of it with the kids. The odds of winning are fairly decent as well.”

Evens’ class agreed with Galgano.  Evens remarked, “I think the kindergarten favorite is the morning raffle. They love it when their classmates win! The little prizes really make their day!”

Students also participated in daily activities which reflected the mission of Providence and CSW. Lower Schoolers engaged in a CSW prayer intention at mass on Monday, crafted patriotic projects on Wednesday, and even attended a magic show on Friday. CSW gave students  the perfect chance to show their appreciation for Father McClellan, PA’s chaplain, by giving him cards and flowers.

Traditionally, there is a full Lower School bingo game, but that could not be played due to social distancing requirements. Instead, lower schoolers played bingo in their classrooms. In lieu of the annual pep fest as well, Hudson the Magician visited the Lower School and performed various magic tricks.

Connelly stated, “My favorite magic trick was the rope trick. The magician had three ropes- two were the same length and one was shorter. Then he put the rope in his pocket, pulled it out, and it was the same length as the other two.”

Between magic tricks, festive games, and fun out-of-uniform days, the Lower School had a blessed and memorable Catholic Schools week.

Galgano concluded with a reflection on the importance of Catholic Schools Week and how intrinsic Catholicism is to the identity of the school, “It makes us focus on the fact that we are a Catholic school. We live Catholicism day in and day out, and the week shows us that faith is something we share.”