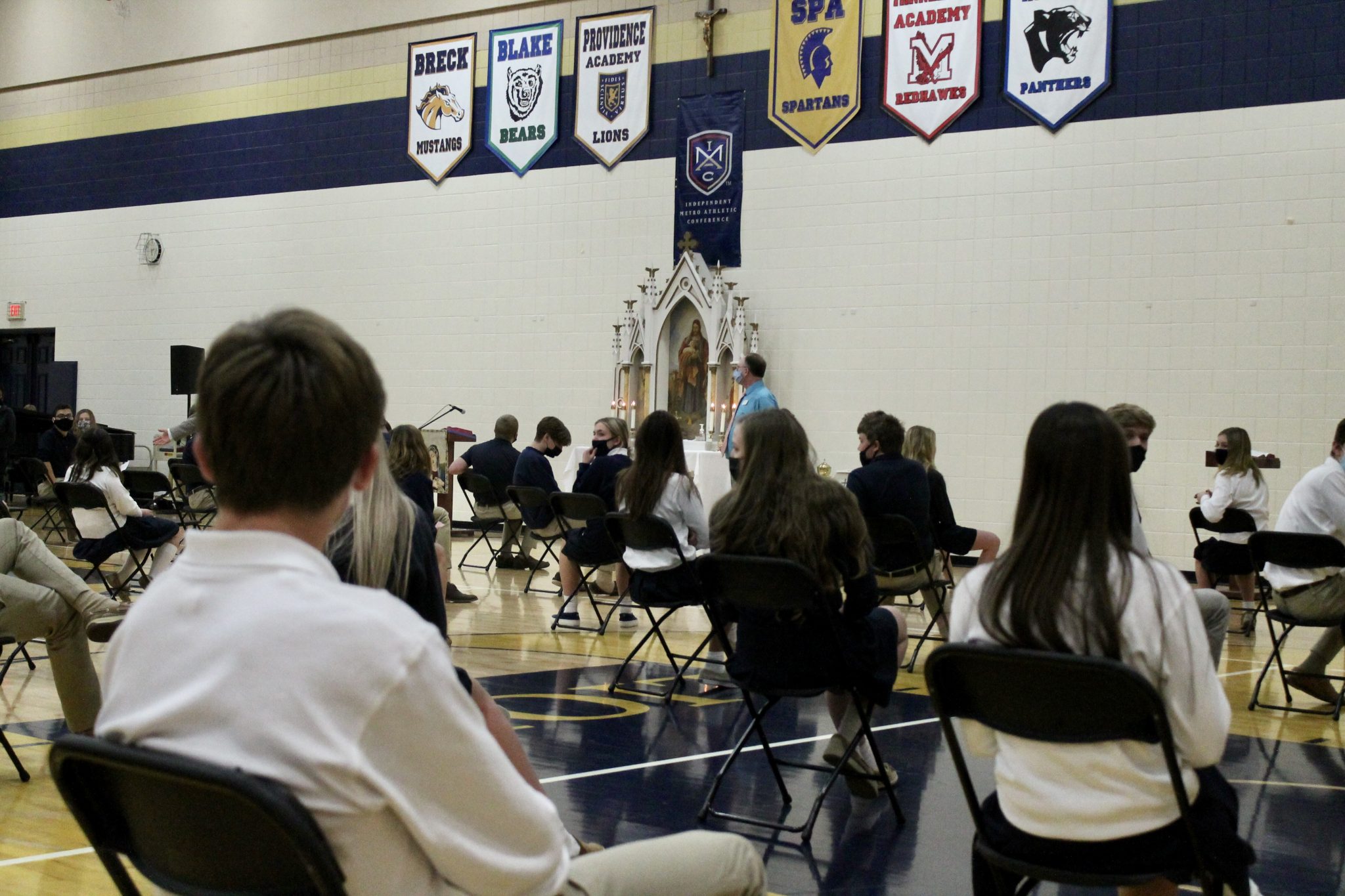 It is no secret that miraculous things happen during each and every mass.  Jesus becomes present in the Bread, venial sins are forgiven through the Penitential Act, and periodically, sacramental grace is granted during weddings or baptisms.  This year, thanks to COVID, mass at PA has donned a new ability: taking place in rooms all around the building.  This school year, students and teachers have worshipped in the chapel, in the Performing Arts Center, and even a gym.

In order to follow social distancing requirements, students  celebrate mass in smaller groups.  Seventh and eighth graders worship together, as do ninth and tenth graders, as well as eleventh and twelfth graders.  Meanwhile, Lower Schoolers celebrate mass in two groups that include a spectrum of grades.  In order to be able to sit a full six feet away from each other, all students gather in the Performing Arts Center, or PAC.  The only exception to this is sixth graders, who have a grade small enough to safely fit into the familiar chapel.

Father Michael McClellan, the school chaplain, commented on this transition, “I have celebrated the mass in many different places over the years, and the PAC is one of the best temporary churches I have ever been in.”

While the Performing Arts Center is indeed beautiful with its grand spaces, brilliant chandeliers, and ornate decorations, Providence had to look elsewhere in order to hold mass this past Tuesday, December 8th, on the feast of the Immaculate Conception.  Providence normally marks this day of obligation with an all-school mass, where nearly all grades gather in the Great Room for worship.  Gathering the entire student body in one room may have been unattainable, but Providence was determined to do the next best thing: having three distinct services: one for the entire Lower School, one for the entire Middle School, and one for the whole Upper School.

Even with the school divided into three sections, PA needed a bigger location.  Gym A, the largest gym PA has to offer, ended up fitting the bill.  With socially distanced chairs and an altar transported from the opposite side of the building, everything came together, with Lower School celebrating mass at 9:25 a.m., Middle School at 12:35 p.m., and Upper School bringing up the rear at 2:25 p.m..

“This is a historical moment,” Father McClellan remarked during his homily. “For the first time in Providence Academy history, we are celebrating mass in a gym.”

This historical moment came with challenges.  Saying mass in a new place is difficult on its own, but PA also had to be sure to preserve the holy and prayerful atmosphere of worship in these makeshift chapels.  Thankfully, this challenge was met, in no small part thanks to a twelve-foot-tall altar new to the PA community.

This 70-year-old altar, with murals of Jesus elegantly painted on the sides, was scoured from the closing St. Peter’s Lutheran Church in early August, so that Technical Director Mr. Dominic Bissonette could begin fixing it up.

“It needed some minor fixes, mostly paint, a few touch ups on trim, and some old electrical wires that needed to be removed,” Mr. Bissonette explained. “The major thing that it needed was the altar stone. This required cutting a hole in the table top of the altar and then adding new supports under the hole to support the thick piece of consecrated marble.”

All of this tedious work was worth it to transform regular rooms into reverent places of worship.  William Wehmann ‘22, reflected that despite the changes, “I loved having all Upper-School mass on Tuesday. Looking around and seeing all of my classmates partaking in the mass was an incredible experience.”