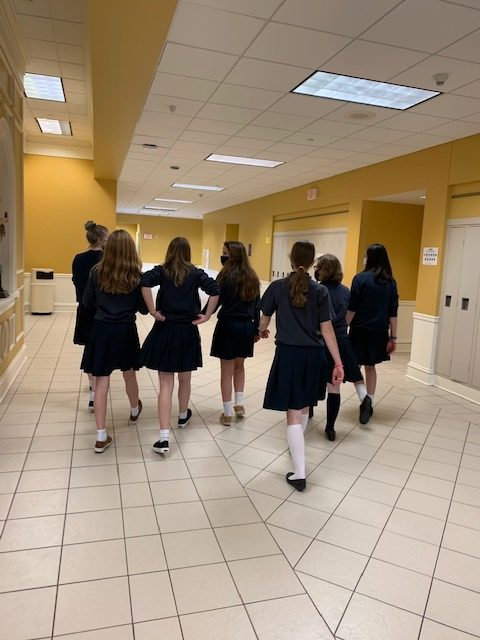 During the last period of the school day on Wednesday December 2nd, each of the eight girls’ houses were given clues to 11 locations around the school. After solving a clue, the girls rushed to each location, where they found a house leader waiting for them. The house leader then gave each group a letter and the clue to the next location in the scavenger hunt.

Ms. Julie Behrens, math teacher and Beta House Advisor exclaimed, “It sounded like a herd of elephants running through the halls as they were giggling and enjoying themselves!”

After going to 11 locations and finding all 11 letters, each house had to unscramble the letters in order to find out what words they spelled. “G-R-E-E-N-E-’S R-O-O-M” was the golden ticket to victory. These words led each house to the final location of the scavenger hunt, the classroom of Ms. Erika Greene, the Head of Women’s House.

Upon reaching her classroom, the girls found a flag with their house name on it. They then had to bring the flag to Mrs. Kate Gregg’s office in order to win.

“It was really exhausting because we ran up and down so many flights of stairs! It was a good team bonding experience for our house, though,” Marie Heyda ‘23, Epsilon house member, commented.

Beta house came in first place, going to all 11 locations and retrieving their flag the fastest of the eight girls’ houses. They won the grand prize of 100 house points, which will contribute to the points needed to win the house competition at the end of the year.

“People were actually smiling and enjoying themselves, which is so important, especially with finals coming up,” Liv Klammer ‘21, Beta House Leader, reflected.

At this time of year, houses would normally be gathering together, making Christmas cookies, and enjoying sweets. However, planning activities looked a lot different due to distancing requirements this year. It required adaptability and resilience, which the house leaders enthusiastically used to bring excitement back into house.

The girls’ house leaders spent two weeks brainstorming ideas for an exciting final activity before semester exams. After sifting through several ideas, they finally landed on the scavenger hunt.

“There’s just something about running around the school together and solving clues that brings people closer,” Klammer commented.

Both house members and leaders had a blast, making the scavenger hunt a huge success. It truly did make up for the loss of some Christmas activities this year.