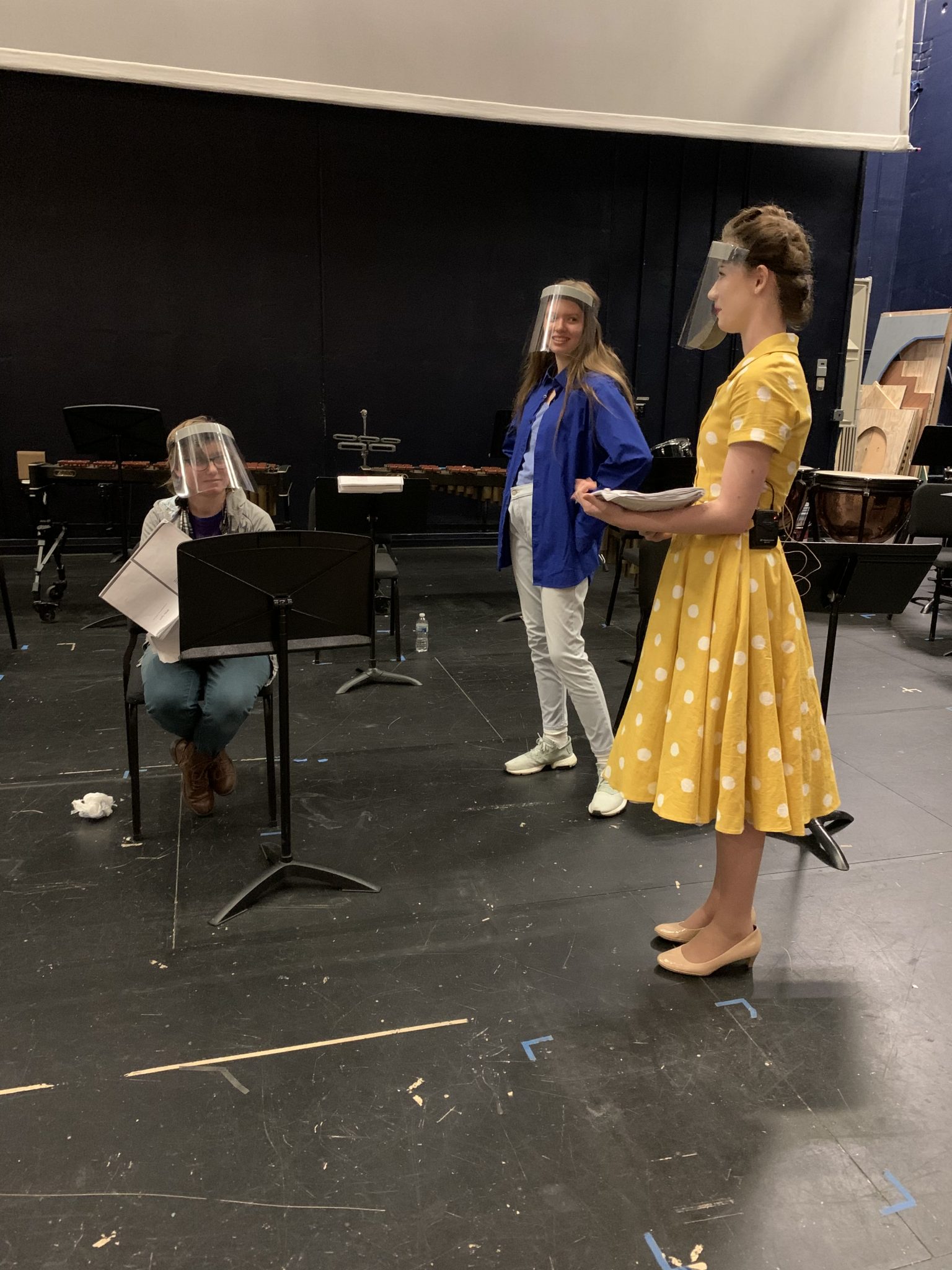 It’s show time! The day of the show is usually a bustling and busy couple of hours of final preparations. The backstage area of the PAC is abuzz with spontaneous karaoke sessions, hair and makeup crew members are attempting to bribe reluctant fashionistas into putting on less agreeable costume and makeup, and the air is thick with an undeniable energy and excitement.

Last weekend, however, didn’t bring the same atmosphere. New actors and veterans alike were thrilled to be back in the swing of things, but there were no costumes to be had, not even a set. Instead, the eight members of Providence Academy’s fall show took their place at a small configuration of seats with microphones and tried their best to make the story of Blithe Spirit come to life with their voices and a few key sound effects.

In response to the recent COVID 19 pandemic, the Upper School theatre department made a major change in order to have their show. They decided to take the fall play, which was already slated to have a small cast in order to remain in COVID restrictions, and make it a radio show. This meant that there would be no set or costumes, just the actors sitting and giving their lines. One student  provided all of the sound effects that would have otherwise been visualized under normal circumstances. Some were simply audio files utilized when the script called for it, like glasses breaking or a record playing. Others, like the sound of tapping on the table or the table falling over were created live by the actors.

For several of the actors, this method of acting was an entirely new approach in the sense of characterization and how they were going to bring these ghosts, mystics, and hopeful authors to life.

“After all, they can’t see me,” leading man Joseph Uzelac, ‘22, reflected. “I have to find ways to convey in my voice that I’ve sat down or that I’m pacing. It puts far more pressure on me as the actor to create just as memorable of an experience for the audience.”

Director Melissa Simmons agreed with this statement with one of her final notes before recording day. “This is an entirely different skillset that we’ve had our players learn and experiment with,” she stated. “It’s not at all what we expected to be doing this year, but everyone involved has done an excellent job of adjusting accordingly.”

Another major deviation from traditional plays that sets radio plays apart is the inclusion of a narrator to read the lines of stage directions, things that would otherwise be acted out by the actors onstage. This was a bit of an adjustment for actors, who were used to skipping the stage directions in the readings of the show, but it gave the cast a chance to truly understand what was going on in any given scene. The addition of a narrator also allowed a new character to be introduced to an already small cast and another voice to be added.

One of the hardest things about doing a show during COVID is the limited number of people who can be involved with the show. While PA theatre works hard to include everyone who wants to be a part of the show, it’s not always possible to cast everyone who tries out. In order to compensate for this, there was a second, shorter show that was put together with the actors who weren’t a part of Blithe Spirit. This ensured that everyone who wanted to share their talents could, and made a new experience for audience members to enjoy.

Overall, the show was a great success, in spite of the different situation of this year. Audience members were able to enjoy the hard work of the Providence Academy players from the comfort of their own homes, and there was the added bonus of no paid admissions.

“This probably wasn’t at all what these kids were planning to do for their fall show, but they did an awesome job with what they were given,” one audience member, a neighbor of one of the cast members of Blithe Spirit enthused. “I’m so glad that I was able to listen to and enjoy the show in spite of everything.”

Though it was by no means the ideal method of having the fall play, the radio play of Blithe Spirit was the perfect thing to get people back into the swing of something normal. Though the virus has changed so, so many things this year, it was a beacon of hope to know the old saying remains true: the show must go on.

One Reply to “PA Theatre: Coming to a Living Room Near You!”