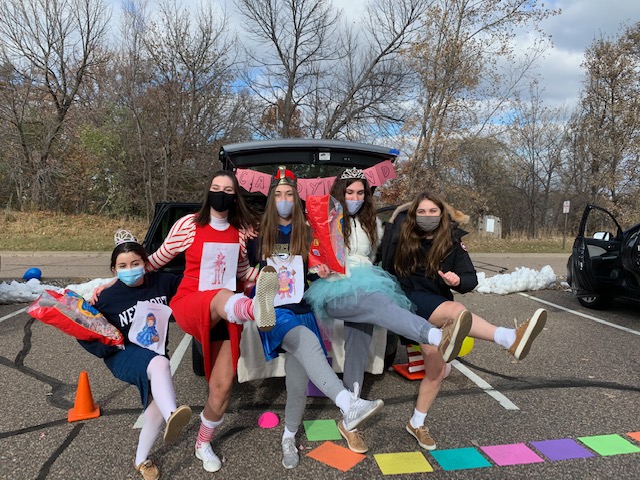 Candy, cars, and costumes, could anyone ask for more? This year, for the first time ever, Providence Academy held a trunk or treat event for the Lower School.

The event was inspired by the cancellation of the Fall Fun Fair and was organized by PA Administration and The National Honors Society (NHS). Trunk or treat was a perfect alternative because it could be held outside in the back parking lot where students could remain safely distanced.

President of NHS Anna Sanchez ‘21 anticipated the event and commented, “I am most looking forward to seeing how the truly little kids react, I think they will be very excited!”

The Lower School faculty was on board with the event as well.

“I think it is a great idea and such a fun way to involve the big kids!” noted 1st grade teacher Robyn Steinbrueck.

On Thursday, October 29th, NHS members divided into groups and spent their elective period decorating their cars according to fun themes they chose. There was everything from an under the sea theme to Star Wars, and even Candy Land. Some Upper School groups even dressed up to match the themes of their cars.

One 1st grader in Steinbrueck’s class exclaimed, “This is my favorite day ever!” while another cheered saying, “I’m happy! I love all the candy!”

“I had so much fun and I wasn’t even the one getting the candy! It’s so fun to give back what I was given when I was younger, so I hope they do this again next year,” reflected Mary Rillens Lee ‘22.

Within minutes of the first Lower School group walking outside, every student and teacher was smiling.

Lower School Director Mrs. Galgano commented, “The kids could not wait, they’ve been talking about it all week. It’s the best thing that has happened this year!”

Overall, the first trunk or treat event at Providence Academy was a big success. Every Lower Schooler, administrator, teacher, and Upper Schooler had a fantastic time, and they hope it will evolve to be a new tradition in the years to come.