Fall Sports Rise to the Occasion

By Olivia Eck On October 22, 2020 In Current Highlights, Sports

In a year full of many “I-didn’t-plan-for-that-s”, yet another is added to the list! As is the custom every fall, football and volleyball seasons have begun. However, this year is much different. Rather than coinciding with the beginning of the school year, these sports have only recently begun practices and games.

As a result of Covid-19, many 2020 sports seasons have been altered. Tennis and soccer, for example, had reduced practices and games, as well as new protocols and regulations. Similarly, football and volleyball were delayed for two months with talk of postponing the seasons until spring.

Fortunately, as of a couple weeks ago, these sports were given the green light to begin their shortened seasons immediately, causing excitement in the PA community. From scrambling to hold tryouts to piecing together game schedules, coaches, players, parents, and members of the athletics department have worked nonstop in the short amount of time they were given. 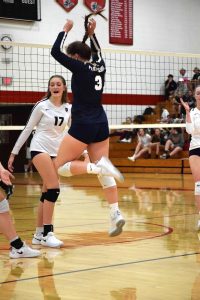 “It has been a crazy time with the season being moved and starting abruptly, with only having a week of practices before the first game,” volleyball coach and math teacher Erika Greene commented.

The football community has been juggling the same challenges as they begin the 2020 season.

“This school year has been about being adaptable,” commented Director of Athletics Daren Messmore.

Messmore has had to tackle new challenges every day as he manages sports during Covid-19. Despite these obstacles, both Messmore and Greene are thrilled to see the teams back together again.

Messmore and Greene’s hard work paid off, because even with two missing starting players, varsity volleyball won their first game of the 2020 season on October 8th. Defeating St. Paul Academy, they triumphed over the unpredictable start to their season. Hitter Maria Counts ‘22 is relieved to be playing as a team once again.

“Practices and open gyms don’t satisfy the competitiveness and intensity that make sports so fun,” she noted.

The football team practicing on the PA turf. (Picture courtesy of Sophia Gable ’22)

Counts is excited to see what the season holds as a result of the new, young talent introduced to the varsity team this year.

“It will be fun to see how we all play together and work together,” reflected Counts.

Similarly, football worked hard as they took on Mound Westonka on Friday, October 9th. Although they lost in overtime, they fought until the last minute, displaying the same perseverance as the volleyball team at their game.

Overall, the grit and resilience of players, parents, coaches, and administrators have overcome the unpredictable start to these fall sports.