By Elle Wiederholt On May 28, 2020 In Current Highlights, News

“The Pentecost of the Upper Room in Jerusalem was the beginning, a beginning which endures” – Pope Francis 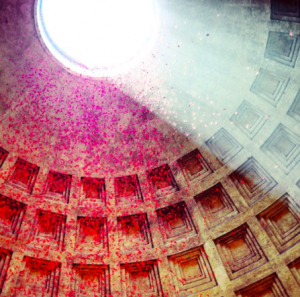 Pentecost at the Pantheon is traditionally celebrated with a rain of rose petals, symbolizing the tongues of fire descending upon the disciples.

On the fiftieth day of the Easter season, Christians celebrate Pentecost, which commemorates the Holy Spirit’s descent upon the Apostles and the beginning of the mission of the Church. As US History teacher Mr. Edward Hester pointed out, “Pentecost is significant because it is considered the birthday of the Church. Although the death and resurrection of Jesus is our salvation, the coming of the Holy Spirit at Pentecost empowers us to live it here in the world”.  What history surrounds Pentecost? And what are the customs have been established to mark this important event in the life of the Church?

As as for timing, Pentecost originated from the Jewish feast “Shavuot”, which occurred 50 days after Passover. At first, the feast celebrated the beginning of the early harvest, but over time it became a remembrance of Moses receiving the Law from God on Mount Sinai. As for nomenclature, the Greek word “pentecoste” means “50th day”, here referencing the 50th day after Easter. Christians celebrate Pentecost, not as a harvest celebration, but as the birth of the Christian religion. 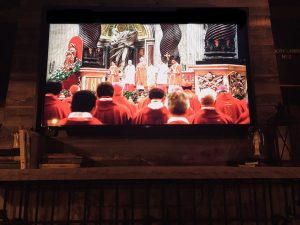 At Pentecost Mass, red decorations and vestments are used to represent the fire above the Apostles’s heads.

After the Resurrection and Ascension of Christ, the Holy Spirit descended upon the Apostles. Tongues of fire appeared over the heads of all in the room and they were immediately able to speak different languages. This allowed the Apostles to preach about Jesus and baptize all of the nations.

Joseph Uzelac ‘22 stated, “Pentecost is significant to the Catholic Church because it was the day that the Holy Spirit came upon and inspired the disciples of our Blessed Lord. This supplied these first disciples with the necessary graces to carry out the Great Commission”.

Peter, inspired by the Holy Spirit taught non-believers and Jews about Jesus and his crucifixion. In this first homily, Peter told the people to repent and be baptized and, according to the Acts of the Apostles, 3,000 followed his word.  The birth of thousands of believers, and their united purpose to share the Gospel is why Pentecost is rightly known as the “birthday” of the Church.

Today, churches commemorate this miraculous event in a variety of ways. Priests wear red symbolizing the tongues of fire. French Pentecost services include trumpets representing the sound of the rushing wind of the Holy Spirit. In some Italian churches, rose petals are released from the ceiling to illustrate the fiery tongues.

On Pentecost, Christians remember the miraculous event of the descent of the Holy Spirit upon the Apostles, and our mission to preach the Gospels.  Uzelac ‘22 continued, “Inspiring is the word most proper for describing the events of Pentecost. The very thought of participating in the act of bringing souls to God, of evangelization, is really inspiring in itself”.