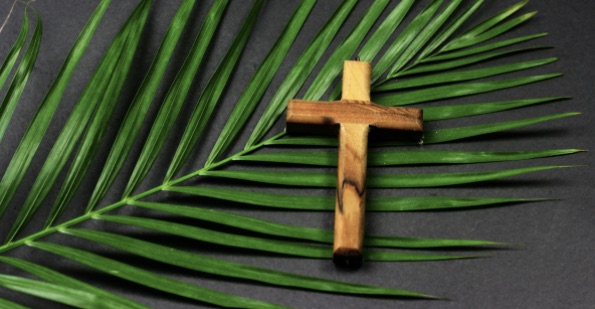 On Palm Sunday, many churches process into the sanctuary and distribute palm branches to the congregation before Mass. In Christian Churches, the Sunday before Easter–the first day of Holy Week–is also known as Passion Sunday. On this day, Christians celebrate the jubilant arrival of Jesus in Jerusalem. The branches represent the palms placed before Jesus’ path by the people of Jerusalem as a sign of respect. These now common scenes call to mind images from that triumphal entry over 2,000 years ago. But how did such traditions come to be practiced among believers?

In Jerusalem, Palm Sunday ceremonies were taking place by the 5th century A.D. Throughout Medieval times, the ceremonies were more elaborate. Starting at one church, the procession pulled a wooden statue of Jesus on a donkey while traveling to another church where the palm branches would be blessed before returning to the original church. In the latter half of the Middle Ages, however, the ceremony was reduced to a procession around the church, ending in the cemetery in order to sprinkle holy water over the graves. In England and France it is still common for parishioners to visit and decorate graves on Palm Sunday.

Later, during the 20th century, ceremonies and celebrations were simplified so the suffering of Christ would be emphasized. Today, the Passion Reading is one of the key parts to the celebration of Palm Sunday in the Catholic

liturgy.  One PA parent shared, “Palm Sunday to me is a bittersweet occasion. We hear how the crowds welcomed Jesus as a king, but by the end of the week those same people were calling out for him to be crucified”.

Mary Rillens Lee ‘22 pointed out, “On Palm Sunday the congregation gets to be a part of the reading, which doesn’t normally happen during Mass.”  Lee continued, “We act as the crowd that tells Pontius Pilate to crucify our Lord. This can be difficult to reenact, but it puts us in the mindset of never wanting to do that again”.

After Mass, the assembly often takes Palm branches home as a devotion or sacramental representation. Lee ‘22 concluded, “Palm Sunday is an important day during Holy Week because it allows us to enter into this time of preparation for Easter and it reminds us of how we need to praise our Lord, just as the Jews did so long ago. We need to lay everything down and allow Him to enter into our hearts”.