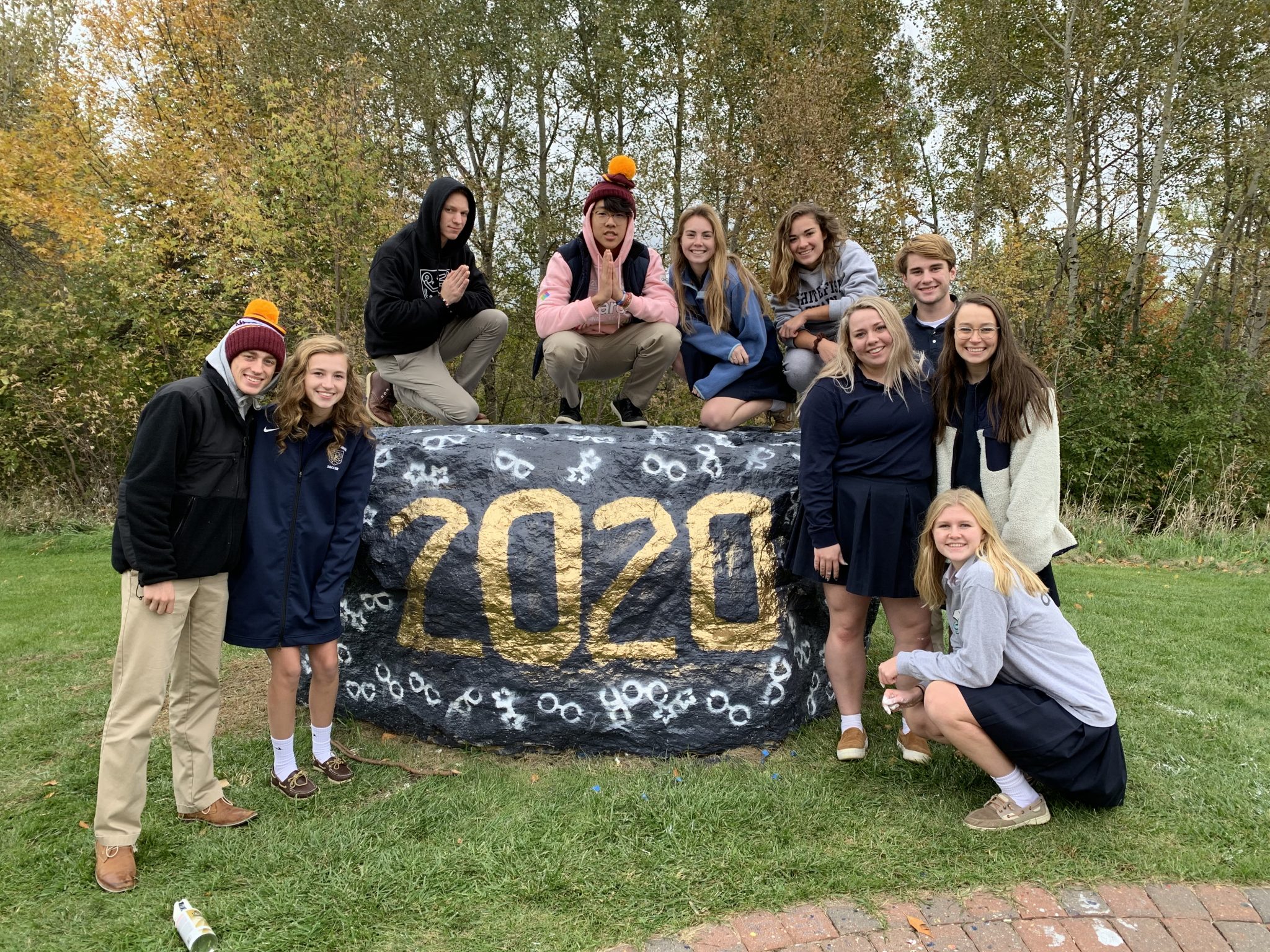 Spring is approaching, a thaw is setting in.  As snow banks recede, landscapes that have been hidden for months become visible once again, like the Senior Rock, painted last October and long covered by Old Man Winter.

The Providence Academy senior rock is a tradition almost 20 years in the making. During their graduating year, students have a chance to showcase creativity and leave their mark on the school with colors and a layout that represent the class as a whole. Past years have featured patriotic themes, splatter paint, and signatures from each member of the class. The rock is never washed off; instead, each year the paint is layered on top of the previous year’s design, an intentional process that represents the building of tradition, and the lasting impact of each class. This year’s senior’s set out to create what some consider the most unique design to date.

The class of 2020 selected a council to design and plan the painting of the rock. Madeline Anderson ‘20 and Aaron Kim ‘20 led the planning and execution of the project. Anderson left the color palette up to a vote: navy or black. The final verdict was a black base with gold accents. She suggested that the design make a reference to the graduation year “2020”.

“We knew we wanted “2020” to be bold and in front. We also agreed to the theme 2020 vision”, explained Anderson. The council sought extra input from the class, asking for artistic suggestions. The winning design features a black base covered with white glasses to represent the senior class’s clear vision of the future. “We took into consideration many different students’ opinions, and we landed on the design that you can see today”.

A handful of students worked together to cover the rock with black paint, and then added the vision themed details on top. Once this had dried, each student was invited to sign their initials in the lenses of the glasses. The whole class worked together to showcase their creativity, and the results reflect this! Members of the Providence Academy community take note of the hard work that senior class put in. Math teacher Ms. Erika Greene says that she sees the rock as she walks down the staircase everyday.

Director of Academics & Curriculum, Mr. Michael Tiffany, is responsible for this long standing tradition.  He shared, “The current rock was installed in the fall of 2011 and was first painted by the class of 2012; the formal tradition of painting the rock came with that graduating class. The initial practice was that seniors painted the rock in the spring shortly before graduation, as did the class of 2012.”

Like many initiatives, the practice improved over time.  Tiffany noted, “Several years later, I changed it to the fall so that each graduating class could enjoy its own design during the course of its final year”.  He expressed that this year’s class went above and beyond, “This year’s design is the eighth one, and the result is, far and away, the best one yet!”