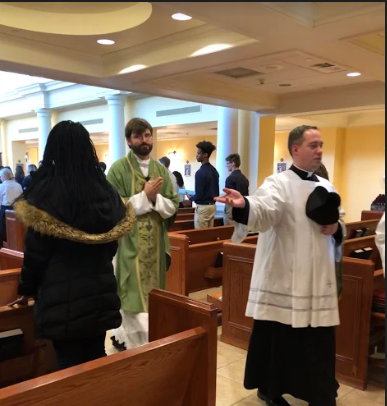 As St. John reminds us, in the beginning was the Word, and the Word was with God, and the Word was God.  In the words of consecration, the Word is made flesh and dwells again with us at each mass.  We recite the words Jesus himself taught us as we pray, Our Father.  Words shape our experience of life and of our faith.  Language students at Providence Academy had a chance to encounter their faith–ever ancient, ever new–in new words last week, to glimpse something of the “universal” church in perhaps a more personal way than ever before.

While the word “Catholic” refers to a follower of the Catholic faith, it also means universal, representing the boundlessness of the faith itself, the breadth and depth of the Church. For the second time in school history,  students in grades eighth and above attended mass in the language they have studied or are currently studying: French, Latin, or Spanish.

This tradition started last year when Señora Esperañza (Mrs. Hope), a standing Spanish teacher, wanted to give her students the opportunity to attend mass in Spanish.  “Context is everything for language,” remarked Hope.  She continued, “What better context to use the languages we are learning than in the context of our faith?”

Father McClellan, the chaplain at PA, expanded the idea, “I thought, why not get the experience for everybody?”

This idea has grown into what looks like the beginning of a new PA tradition.  These masses, christened the “Language Masses’’, kicked off this year last Tuesday February 6, when Father Erik Lundgren — an Edina native, French heritage speaker, who preaches at Saints Joachim and Anne Church in Shakopee — joined us to celebrate the mass in French.

The French mass was exclusively in French, including everything down to the homily.  But Father Lundgren wasn’t the only one speaking

the target language. French 5 students Olivia Klammer ‘21 and Mary Dudley ‘20 had a chance to participate in this event by lectoring or cantoring the psalm.

“I cantored to take advantage of a unique opportunity and combine my love for singing and French,” Dudley enthused.

The second mass, the Latin mass, took place on Wednesday, celebrated by our own Father McClellan.  Many students in the PA community are already familiar with the Latin responses, particularly the Sanctus and Agnus Dei.  Unlike the French mass, the Latin mass was not completely in Latin, with the reading, homily, and petitions all spoken in English.

“That is how the Latin mass is typically done,” Father McClellan explains, “If you were to go to St. Peter’s Basilica in Rome, that is how it is said”.

Thursday brought the language masses to a close with Father McClellan — who learned Spanish in high school and studied in Guadalajara, Mexico — celebrating the Spanish mass.  Similar to the French mass, the Spanish mass was conducted entirely in Spanish, with Upper School Spanish instructor Señora Ramirez lectoring, and Netter Cristian Aguinaga singing the psalm.

“This event is a good reminder that the Church is broader than just our own experience.  It is for all times and all cultures”, McClellan noted. So no matter where you travel in the world, you can always stay connected to the Church and her founder: Christ.