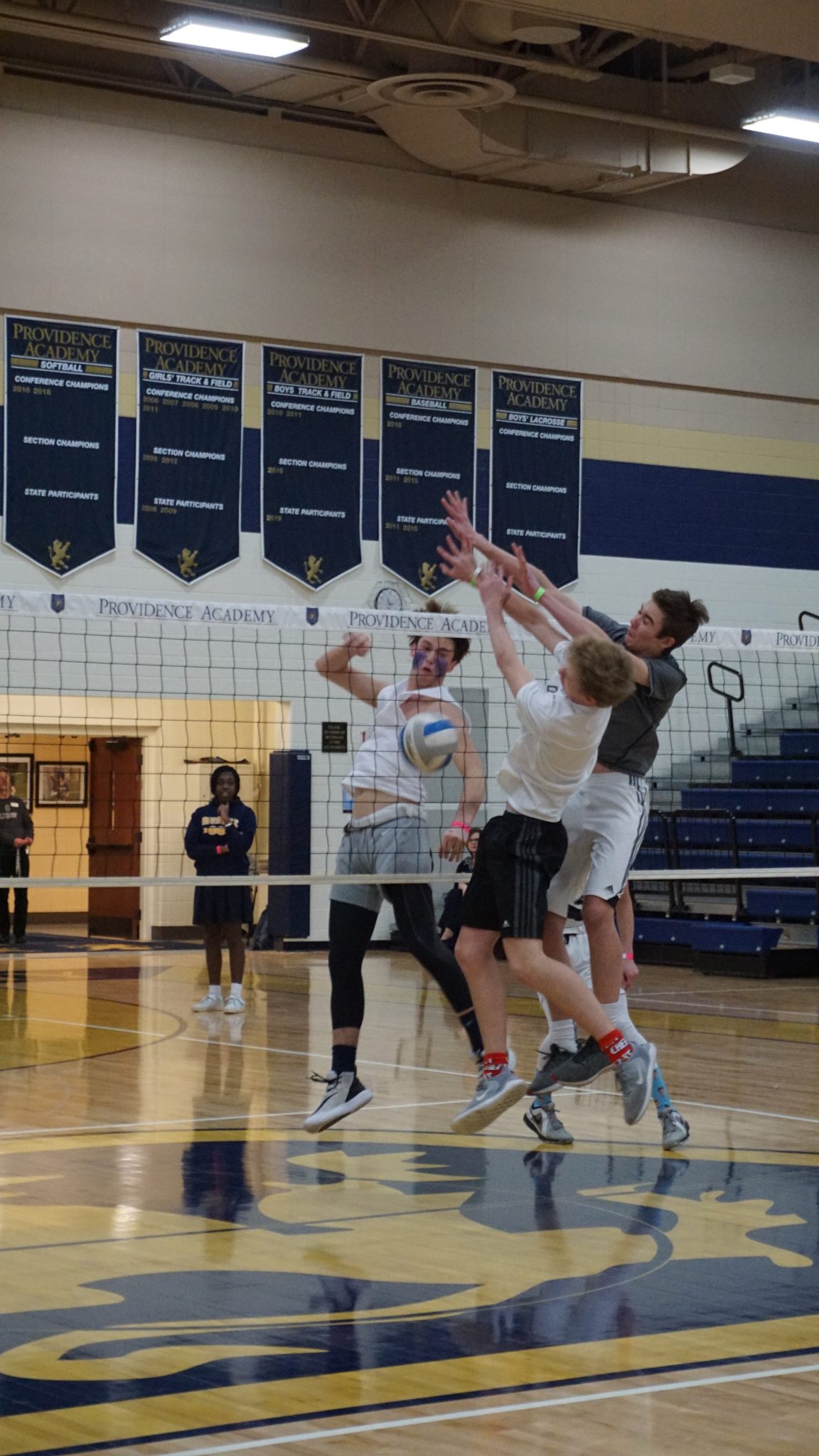 When most people hear the words “volleyball game”, a specific image comes to mind. Matching uniforms, lobbing a ball over a net, the occasional bad call or a close game, and the perfunctory handshake at end of the match.  Why, one might wonder, did the PA gym host a mighty cross between a ninja and the Black Panther, a Macaroni penguin who’s in it to win it, a leprechaun with a sparkly fedora, an individual by the moniker of DJ Salad, and a swashbuckling pirate during last Wednesday’s “volleyball game”?  The answer can only be the annual Junior-Senior boys volleyball match-up in celebration of Catholic Schools Week.

That being said, it isn’t necessarily the game that people come for. “We go more so to be entertained by all the yelling and weirdness that ensues,” Liv Bissonette, ‘22 commented.

Weirdness, indeed. While there is a somewhat legitimate game underway, the showmanship is what draws people into the game year after year. With outlandish costumes, bizarre team rituals, and an overall rowdy atmosphere, students get excited for Powerpuff for the sole reason of seeing what the juniors and seniors have up their sleeves this year.  The players live up to fans’ expectations; at one point, a senior pirate proceeded to steal the ball and flee into the throng of frenzied spectators.

Of course, the “themes” of the teams aren’t always purposeful. This year’s juniors made an inadvertent literary connection with their attire, evoking the likes of Piggy, Ralph, and Simon with their tattered garments and war paint. Whether they meant to or not, this year’s junior team would have fit right in with the motley crew of island boys in William Golding’s Lord of the Flies.

“We actually didn’t plan it that way”, Alex Doucette, ‘21, admitted. “One person showed up with a shredded uniform; the rest of it followed”.

The seniors weren’t as uniform with their visual “theme”, but it didn’t take away from the fun, quirky atmosphere that their appearance provided. Invoking everything from Uncle Sam to Hawaiian inspired attire, the seniors’ outfits were here, there, and everywhere, and the only true unifying factor was the enthusiasm for the game and the odd, hissing ritual that was performed before the match. What did it mean? One can only wonder.

Beyond all the antics, the Powerpuff game has a lasting impact on its players. Not only do they get memories to last a lifetime expressing themselves through sports and costumes, but some are even inspired to continue pursuing volleyball, though perhaps with more structure and less costumes.

“Powerpuff made me want to do volleyball in college,” Ikemonso Ayika, ‘20, reflected, “It’s also just a good way to have fun with fellow seniors without getting benched.”