By Andrew McGurl On January 23, 2020 In Current Highlights, News 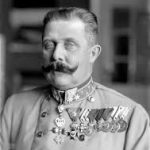 World War I, The Great War, one unlike any armed engagement the world had ever seen. Leaving in its wake an estimated 20 million fatalities, the first world war was an earth-shattering conflict that changed how nations and people interact with each other. WWI and its post-war treaties such as the Paris Peace Treaty set the stage for the Second World War and fundamentally altered the nature of international relations.

The Seminal Catastrophe, as it would come to be known, was kicked off by the assassination of Archduke of the Austro-Hungarian Empire, Franz Ferdinand, along with his wife. He was shot to death in the street by a Serbian Nationalist named Gavrilo Princip. This assassination would be the spark that set off the powder keg that was early 20th Century Europe.

Europe, at the time, was a hodge-podge of alliance systems, complex treaties, overly confusing land disputes, and erratic and overzealous leaders. The assassination flung Europe into a bloody, devastating, unprecedented, four-year 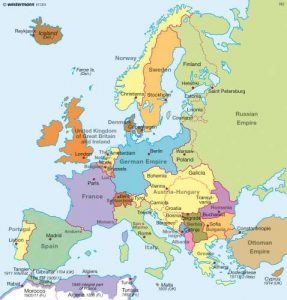 A map of Continental Europe before the war.

conflict, before. Cavalry soldiers, unprepared for modern warfare were mowed down by machine guns, men wielding sabers faced men firing artillery, a groundbreaking engagement that exposed the militaristic might of select nations.

The victorious Allied Powers felt they needed to enact harsh punishments on the Central Powers in order to ensure that a conflict of this magnitude would never occur again. Unfortunately, their attempts to build a safer and more united world would lead to an more brutal future war.

The Paris Peace Conference officially began on January 18, 1919, a day specifically picked to embarrass Germans. In 1871, this was the day that William I was crowned as German Emperor, and in 1701, the date of the formation of the Kingdom of Prussia.

The “Big Four” leaders; the leaders of the US, England, France, and Italy.

The “Big Four” – consisting of the United States, Britain, France, and Italy – dominated the conference, all of their resolutions and decrees were immediately accepted and ratified by the other 27 nations in attendance. The main goals of the Allies were: to ensure that Germany (who they viewed as the main aggressor in the war) would never attempt to engage in continental warfare again, establish an organization for the sake of world unity (to be known as the League of Nations), and to punish all Axis Powers for their role in the war.

The Germans were hit hard with reparations and forced to admit full responsibility for the Great War. This fact is often cited as a reason for the Nazi Party’s vast support among the disenfranchised German people. Germany was forced to pay exorbitant reparations, so much so that their new nation, referred to as the Weimar Republic experienced inflation at an extraordinary rate. People literally brought wheelbarrows of banknotes to buy a single loaf of bread; their currency became more worthless than the paper it was printed on. 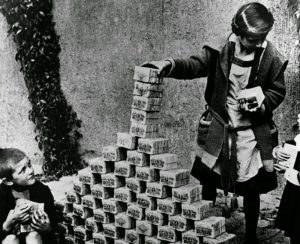 Children playing with bricks of worthless, hyperinflated currency during the Weimar Republic, 1922.

France and England were the greatest supporters of severe penalties for the German nation. The two countries divided up the German colonial possessions, another blow to their economy, as their Asian and African colonies were their largest exporters of minerals, precious metals, and many other valuable items.

At the end of it all, Germany and its allies would be severely weakened – economically, industrially, and mentally. The harsh reparations placed on the Axis powers, particularly Germany, severely limited the nations’ ability to recover and adequately reform their systems of government. The social changes Europe faced during and after the war would influence the way that all nations on Earth interact with each other.