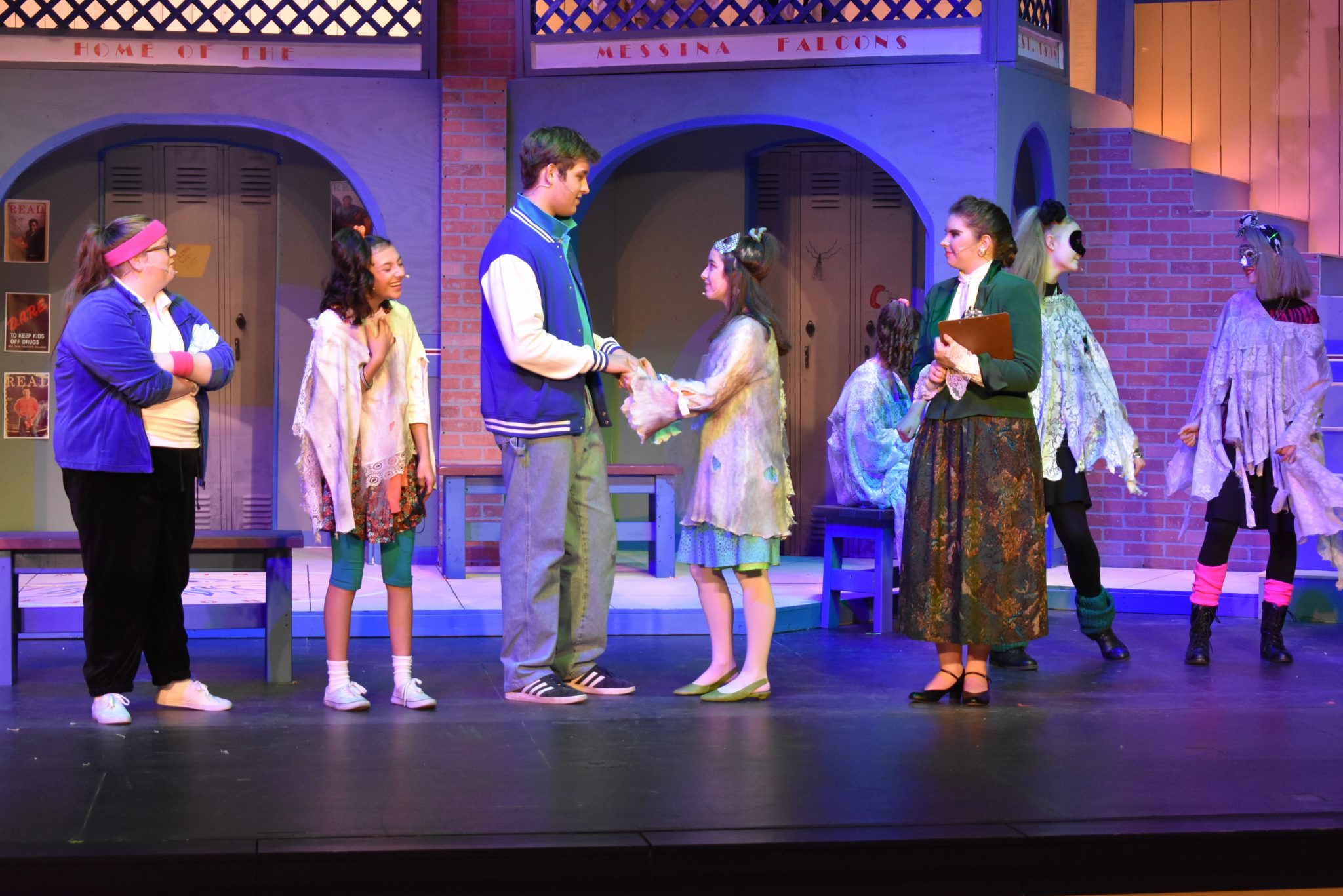 When many people think of Shakespeare, they think of words they’ve never heard, guys with feathered hats in poofy pants, and jokes that go right over their heads. They might assume it’s “boring” or that only people with “class” can understand what’s happening. However, those who typically find themselves lost amid Shakespeare’s world but attended the Upper School fall play earlier this month had a pleasant surprise. Much Ado About Nothing got a fresh take–or at least a wardrobe change–set in a high school setting circa 1985.

Costumes looked like something out of a John Hughes movie, and the music–from “Careless Whisper” to “I Wanna Dance With Somebody”–brought a familiarity to some parents in the audience. Not a word of the dialogue was changed, but the entire set and costume design looked like something that wouldn’t be out of place in The Breakfast Club, Pretty in Pink, or Sixteen Candles. With huge hair, mall bangs, gaudy eye shadow, and clothes that brought back fond memories for parents, Shakespeare takes on a new life and becomes something a new generation can almost relate to.

The show featured several songs any mixtape in the eighties would have featured, including the iconic “Thriller” dance performed by the entire cast, and a curious variation of “Eye of the Tiger” by the male cast. Soulful leading man Claudio (Adam Huser, ‘20) and comical Benedick (Ikemonso Ayika, ‘20) even paid tribute to Claudio’s dead girlfriend Hero (Aly  Marshall, ‘23) with a rendition of “Purple Rain”. While the tunes to all of these were recognizable to anyone in the audience, “Purple Rain” and “Eye of the Tiger” were paired to the original Shakespearean lyrics written into the script, remaining true to the original text while still taking a more modern angle that makes these stories both universal and timeless.

Emma Ellings, ‘21, who played the role of Don John’s charismatic sister Don Pedro, reflected on the effects of using eighties music in the show, “It kept audiences paying attention and helped them follow the story better”.

Besides the songs, there were a lot of eighties’ “Easter Eggs” scattered throughout the show that kept people on their toes and looking at the stage. Fans of “Stranger Things” noticed that the costumes vaguely resembled the get-ups worn by the characters in the show, and the dance at the very end of the show was almost a  direct callback to the movie “Footloose”, complete with a half circle that allowed cast members to “strut their stuff” in the center and ending with the iconic lift from “Dirty Dancing”, performed by Adam Huser and Aly Marshall.

“It was great to try and find all of the little hidden “eighties” gems throughout the play,” a Providence parent enthused. “It made the experience fun for all”.

Overall, the play was not as big of a success as some of the musicals, but it still had a good draw thanks to its clever twist.The eighties theme brought in a new aspect to a timeless story, as well as a new audience for the theatre department. Although not an incredibly popular show, this year’s Much Ado was definitely an unforgettable one.