By Emma Wohlwend On October 22, 2019 In Current Highlights, News 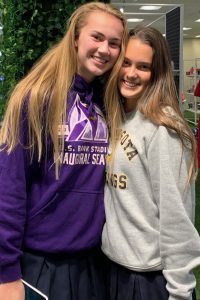 Kristin Welch ‘22 and Ellie Millerbernd ‘22 pose in their Vikings attire on Packers vs. Vikings Day.

Student-voted lunch menus, less homework, fun dress up days, special events during school, and more, homecoming week is always a joyful part of the semester! Teachers and staff at PA, along with the Student Council, put in a lot of effort so that this week is one to remember. If you were at Providence leading up to Friday’s game on October 11, you may have seen Packers vs. Vikings, Mathletes vs. Athletes, or other spirit wear in the hallways.

“I enjoy the out of uniform days we have because it allows us to have freedom in our clothing choice and to see our classmates’ sense of style”, noted Emma Speier ’22. She continued, “This year, I thought that Mathlete vs. Athlete was a fun theme because we were able to show our interests outside of school,”

Students look forward to having the freedom of shoe and shirt choice throughout the week but they aren’t the only ones who join in on the festivities. Teachers were also in on the dress up days. Some of this year’s highlights were Mrs. Claypool and Mr. Bissonette, both dressed as Paul Bunyan during Middle School’s “dress like a state day”, and Mr. Hester dressing as a student in a uniform during the Upper School’s full out of uniform day. 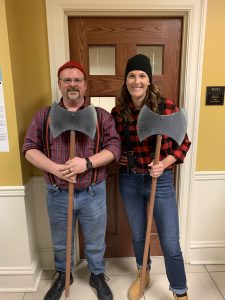 Mrs. Claypool and Mr. Bissonette show off their Paul Bunyan costumes during the Middle School “dress like a state” day.

Not only are there fun events going on from 8 to 4, but evening activities are also a hit. From volleyball to soccer to powderpuff, and the football game on Friday to close out the sporting events of the week, students show up with lots of energy to cheer each other on! “I love going to the spirit games at night because there’s always a supportive student section present to cheer their classmates on”, Ava Wasserman ‘22 reflects.

The powderpuff game on Wednesday night drew fans in to watch the senior girls take on the junior girls; this year’s seniors pulled the win. Thursday night, volleyball beat Breck, a particularly sweet victory for Kate Neill ‘20, who made her 1,000th kill, and set a new school record.

Friday’s pep fest closed out the week, and effectively pumped up school spirit in preparation for the football game against Richfield. Some of this years highlights for the pep fest were “The Heathers Dance” by the history department, many games of tug of war, and a relay between 5th graders. “I look forward to the pep fest every year because it is fun to compete against teachers and classmates, and to show some school spirit”, Liam Carney ‘22 says. 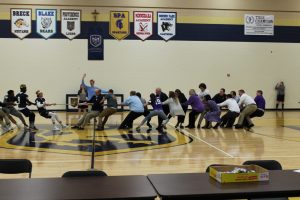 The teachers compete against the PA football team in a game of Tug of War.

Speier says, “After school on Friday, everyone goes home to prepare for the fun weekend ahead – the football game and the dance are always highlights of the week”. After school ended on Friday, students went home to gear up in their togas and white and gold clothes for the football game, looking forward to the dance to follow on Saturday, all centered around our Romecoming theme!