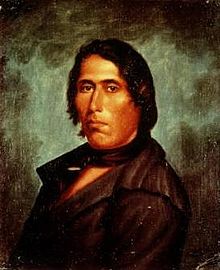 The early 19th century was a trying time for anyone who called the frontier their home. Tensions between natives concerned with maintaining their rich, thousand year history, and settlers concerned with “manifest destiny” and building a rich history for their new country rose to new highs. Neither side had much interest in lasting compromise and much violence erupted. This violence deeply influenced the mindsets and worldviews of all who were brought up within it.  One man, however, was influenced by the turmoil of the time perhaps more than most, Chief Tecumseh. This past weekend, October 5th, marked the anniversary of his death.

Born 1776 in Old Chillicothe (present-day Ohio, Indiana, and Kentucky) Tecumseh experienced the effects of death from an early age. As a child, Tecumseh lost three members of his family to violence of the settlers. Providence Academy history teacher, Dr. Kevin Keiser, points towards this fact as a leading factor in Tecumseh’s formation.

“Tecumseh’s early years,” noted Keiser, “were marred by death, violence, lies, and constant moving.” Indeed they were. In the six years following the death of his father, the result of a retaliative attack carried out by settlers during Lord Dunsmore’s war, Tecumseh was forced to relocate three times due to the destruction of once safe villages. Keiser quickly pointed out the violence wasn’t one-sided; Tecumseh’s experiences of injustice and brutality from both sides would inform his manner of governing and manner of warfare as an adult.

At the close of the American Revolutionary War (1783), Tecumseh joined up with a band of Shawnee determined to stop American expansion into their land, achieved by disrupting the Ohio River’s trading routes. They stopped so many ships, trade on the river practically halted.

Following Tecumseh’s success on the river, he began leading his own group of Shawnee warriors and joined with his older brother, Chiksika and his warriors to fight against more American expansion in the Northwest Indian Wars. When Chiksika was killed, Tecumseh assumed control of all his brother’s men. With this mass of warriors and past experience he was ready to finally assume a more intense leadership role.

Prophetstown was unlike any other native settlement the Americas had ever seen; a staggering 14 tribes were represented in the town. Drawing on his own life experiences, Tecumseh knew that seperate, the Natives stood little chance, but united against the settlers, they might preserve their way of life.

While Tecumseh and his brother built up Prophetstown, other tribes signed away thousands of square miles of land to the American Government. In particular, Indiana governor William Henry Harrison led the charge for the cession

of land to the U.S. Government. In 1810, Tecumseh and Harrison had their first face-to-face encounter. Tecumseh demanded that Harrison rescind the treaties previously made with tribes and return their land. When Harrison refused, Tecumseh led a force of around 400  warriors to Harrison’s home.

“From there,” remarked Keiser, “the details get murky.  What we know is that one party incited violence against the other which resulted in a sort of standoff.”  Eventually, the chief of the Potawatomi, a pro-American tribe, working with Harrison, pled with Tecumseh to return to Prophetstown. Tecumseh caved and promised Harrison that if the Fort Wayne treaty, a treaty ceding significant land to the U.S. government, was not rescinded, he would have no choice but to aid the British in the burgeoning War of 1812.

Soon, Harrison decided to march his troops to Prophetstown and destroy Tecumseh’s confederation for good. Now known as the Battle of Tippecanoe, this would form Harrison’s presidential campaign slogan: “Tippecanoe and Tyler too!”. About two hours after launching the attack, the natives retreated. The Ameircans followed and burned Prophetstown to the ground.

Tecumseh enjoyed new support after Tippecanoe and joined forces with the British for the Siege of Detroit. He lead a maneuver making it seem as though there were many more natives fighting than the actual 400. The rouse succeeded. Fearing a massacre, Detroit surrendered and was taken by the British. The British awarded Tecumseh with a sash for his efforts, but he returned it with “respectful contempt”.

Finally, Tecumseh and his Confederacy had their last stand at the Battle of the Thames. Before this battle began, Tecumseh gave a passionate speech to his warriors saying, “Our lives are in the hands of the Great Spirit. We are determined to defend our lands, and if it be his will, we wish to leave our bones upon them.” Unfortunately, Tecumseh would be among those laying down their bones down that day. On October 5, 1813, British General Procter ordered all of the Native and British forces to retreat up the Thames river. The British regulars, exhausted from a war on foreign soil they cared little about, put up little resistance when the Americans attacked, resulting in a swift, sweeping American victory. Historians disagree on the details but all agree that in the fighting that ensued, Tecumseh was fatally shot and beaten to death. Upon witnessing this, many of the Native warriors retreated. Later, they would formally surrender to William Henry Harrison and return to their homes.

After this defeat, Tecumseh’s Confederacy fell apart, never to be reformed. The last great resistance to Manifest Destiny had been trampled. The Americans began moving further and further west after the conclusion of this war. In the minds of the Natives, Tecumseh represented strength in the face of extreme odds, an unwavering dedication to protecting one’s values and way of life. Americans, too, would later come to appreciate the qualities that Tecumseh possessed and his unique ability to unite tribes that decades or even years before had been at war.