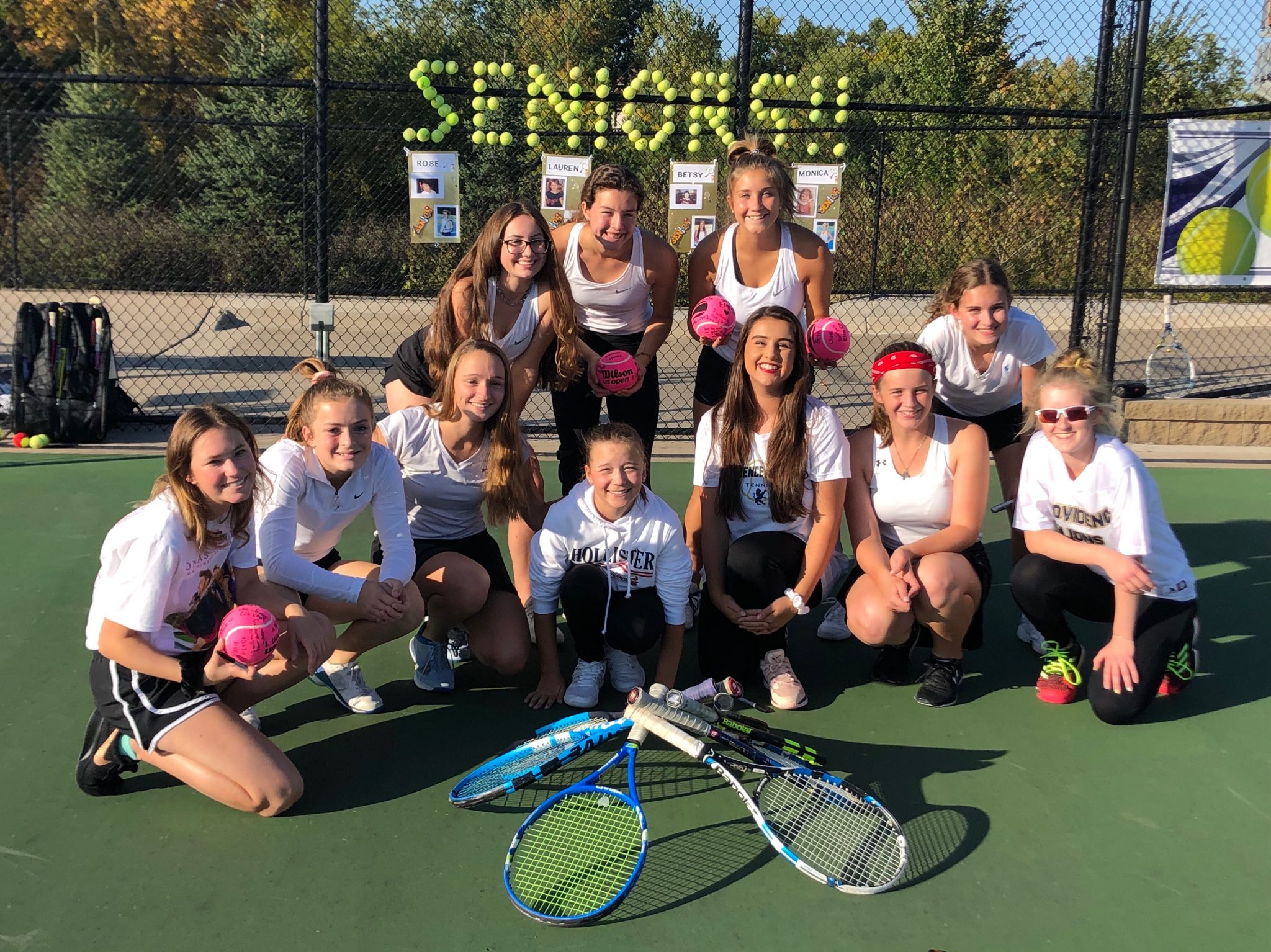 The day couldn’t have been more perfect.  Eleven girls, two coaches, and many parents gathered on the tennis courts.  A playlist of upbeat songs blared from a speaker, with girls wailing all the lyrics they knew until the whole team joined in.  With “seniors” spelled out in tennis balls on the fence and the celebratory energy of the team, this year’s seniors enjoyed one last practice with their team.

The varsity girls’ tennis team wrapped up their season, Monday October 7, celebrating their seniors a few days late after the last regular season scheduled match was rained out.  The team made the best of a delayed farewell.  In addition to playing Go-lob–a favorite drill–the team enjoyed pizza, signed special tennis balls for the seniors to carry with them after high school, took lots (and lots!) of pictures, and enjoyed the presence of a life-sized poster of Joe Jonas, courtesy of Lauren Happe ‘20.

The majority of the team can look forward to even more laughs next year, but Betsy Schoenwetter ‘20, Rose Cummins ‘20, Happe ‘20, and Monica Rampenstraiter ‘20, won’t be back on the PA courts next season. Schoenwetter notes that she will miss tennis more than anything–from coaches to matches–and held back tears at their last match as she recalled it would be her last time with the team. Each graduating senior brought something special to the group.

Schoenwetter, captain, has played varsity tennis since seventh grade.  She has led the team in everything from creating a playlist, starting sing-a-longs on bus rides back from matches, and even coaching first and second graders before practice.  As Koral Horstman ’23 put it, her optimism will be missed, “I don’t think I’ve ever seen her angry about anything,” she pointed out.

Cummins, co-captain, played first doubles for the Lady Lions.  She is a notable expert at getting the team pumped up and ready to play before matches.  Happe, Cummins’ doubles partner, brings spunk every time she walks on the court.  Teammates agree with Horstman, who attests, “I’m going to miss her fire in the games”.

Rounding out the senior squad, Rampetstreiter is known for her positive attitude and encouragement to teammates, no matter the score.  Alyssa Wilkins, assistant varsity coach notes, “Monica is a team player, always willing to do what is needed to help others”.

The season goes quickly but memories last a lifetime.  “We bonded really well in a short amount of time, which is amazing considering the fact that half of us are new to varsity this year, yet we shared so many unforgettable times,” reflects Schoenwetter,  There have been countless inside jokes and irreplaceable times all because of tennis. It is safe to say the tennis team is sending off their seniors with not only love but memories.