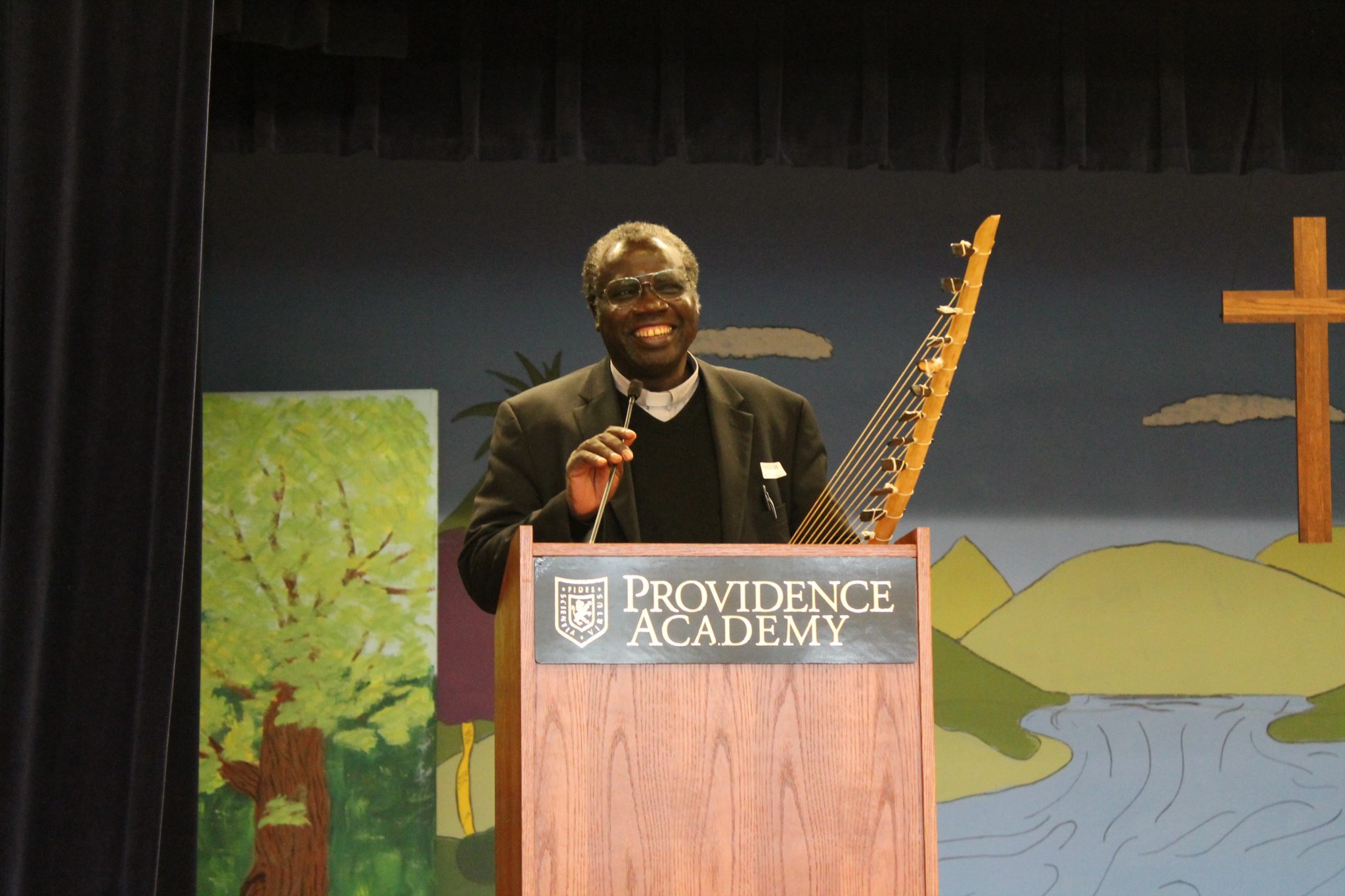 Monsignor Odong visited Providence Academy last week, coming to show his gratitude for our assistance funding his school in Uganda and solicit ongoing support. The school, named Archbishop Flynn Secondary School after our own Archbishop Flynn who has recently passed away, is entering its 11th year serving the communities surrounding Pader, Uganda.

Just 10 years ago, the opening of the Archbishop Flynn Secondary School allowed students in Uganda access to private education. Here, they could grow in academics, as well as but in their faith, knowledge, and virtue. According to Monsignor Odong, the people in Uganda always had a goal of being able to create a school similar in values to Providence Academy, a school where students could grow not only in basic skills such as math and writing, but have opportunities to develop their faith and leadership. Support from Providence and many others here in Minnesota, made it possible for Monsignor to make this dream a reality and fulfill this part of his priestly calling.

So much support was shown from the Minneapolis area that the school was named after our own archbishop. Archbishop Flynn showed his generosity when he supported Uganda and gathered the Christian community in Minneapolis, because he wanted to be able to help create a school in Uganda for the children and families there, living in poverty as a result of the war. Archbishop Flynn is a man well-known for his compassion and generosity towards others.

Monsignor Odong reflected on the life of Archbishop Flynn saying, “He was a man who cared so much about the people around him, and always wanted to support us, all the way in Uganda. He made it a priority to ensure that the kids in Uganda had a good Catholic education”.

PA Chaplain Father Michael McClellan echoed his sentiments, saying, “Any encounter I ever had with Flynn always left me with a good impression. I got to know him when I was in seminary, and will always remember him for his personal holiness, his kindness, and as a fine example of a Christian gentleman”.

Now a tradition at Providence, students look forward to a visit from ‘the ice cream man’ each year. Monsignor Odong became known as the ice cream man because of his famous “Ice Cream Song” enjoyed by lower, middle and upper schoolers alike.

“I always enjoy coming to Providence Academy to visit the students because I am shown what a good community is here, and how much support Uganda has” Odong remarked.  He concluded, “Even if I were to die tomorrow, I know that the people of Uganda are supported by the people of Minnesota”.