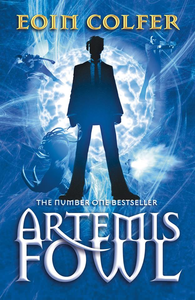 Once upon a time, there was a lonely little boy who didn’t see much of his parents. Small and skinny, with jet black hair and piercing eyes, he was a bit of a loner who kept to himself and didn’t really fit in. What he didn’t know was that there was a fantastical world beyond anything he could have imagined just waiting to be found.

Most fantasy readers today would read this description and come to one or two conclusions as to who it’s referencing. Classic fantasy readers will instantly recognize the boy as Harry Potter, J.K. Rowling’s Boy Who Lived who goes to the magical school of Hogwarts and saves man (and wizard) kind from Lord Voldemort. Readers from

a younger generation will think of Percy Jackson first, the Long Island native who’s actually the son of Posiedon and saves the world not once, but twice over the course of his two book series. What many people don’t realize is that there’s yet another boy with another story whom everyone forgets who fits the description: an Irish billionaire by the name of Artemis Fowl.

The Artemis Fowl series was published by Eoin (pronounced “Owen”) Colfer in the early 2000s. The eight book series follows the adventures of young Artemis Fowl and his bodyguard Butler as they try to maintain the delicate balance between the world of the “mud men” (what the fairy people call humans), and the fairy realm, which exists underground. With time paradoxes, lost colonies, and criminal heists to give the greatest masterminds a run for their money, Artemis Fowl combines fantasy, science fiction and action in an alluring and interesting setting.

So why does nobody read them? This may be primarily because Artemis isn’t exactly the most likable character at first. Unlike Harry and Percy–both of whom have the reader’s sympathies from page one–Artemis has to be read before he can be judged. His actions are often questionable.  From kidnapping Holly–an elf who happens to have a literal pot of gold–for ransom to sabotaging bank security systems, his criminal record is far from clean. Unlike most teenage protagonists, Artemis is more of an anti hero, a charming and witty character who is villainous, but still manages to win over the readers’ appreciation with his loneliness and determination to do anything for his family, even if it means breaking the law to do so.

So what makes these books better than Harry and Percy, if the character is far from moral? For one thing, there’s  no romance plot of any kind; it’s all action. This not only clears up the muddling plot that Harry Potter often suffers from, but it arguable makes the book appealing for a broader audience. Emma Ellings ‘21, a local bibliophile, agrees with this sentiment, remarking, “It was a very good series that stayed engaging throughout. I appreciated the absence of a romance plot, since that was where the Harry Potter series fell away from the main story line.”

The varied settings in the Artemis’ series range from bank vaults in Madrid to the 101 Building in Tei Pai, bringing the fast paced action of James Bond and even Sherlock Holmes to the fantasy realm, as Mae Monette ’21 noted.   Monette was very enthusiastic about the series, stating, “I loved Sherlock Holmes and Percy Jackson, so this was a great series to read”.

So if you’re looking for something new to cheer you up from the post-Potter romance blues, Artemis Fowl is a charming and well written surprise that will leave any avid fantasy reader glad to answer the question:  Artemis Who?