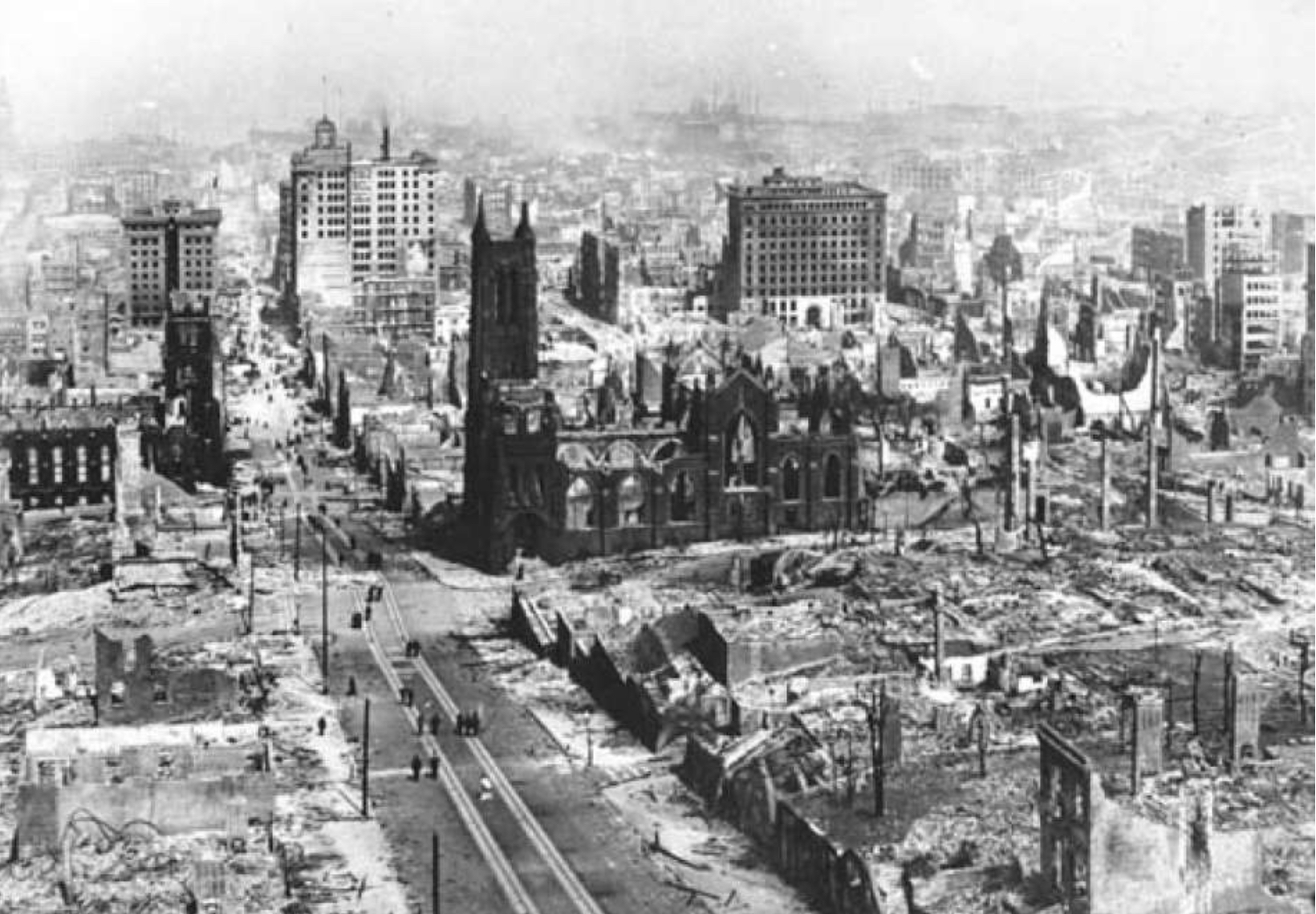 On this day in 1906, a massive earthquake shook San Francisco, destroying nearly 500 city blocks and igniting several large fires that would rage for days. One of the worst disasters in United States history, the catastrophic quake left over 80% of the city in ruins, killing more than 3,000 people and leveling the homes of hundreds of thousands.

The San Francisco earthquake of April 18, 1906 ranks as one of the most significant earthquakes of all time. Following a strong foreshock by about 20 to 25 seconds, it occurred at approximately 5:12 a.m. Rupturing 296 miles of the San Andreas fault to the north and south of the city, the great tremor could be felt from Oregon to Los Angeles and as far inland as central Nevada. For comparison, the 1989 Loma Prieta earthquake had a rupture length of only about 25 miles.

The 1906 earthquake preceded the development of the Richter magnitude scale by three decades, but the most widely accepted estimate for the magnitude of the quake is 7.9, described as “major” to “great”. Astonishingly, it permanently shifted the course of the Salinas River near its mouth, diverting it six miles to the south to a new channel.

As the epicenter, or “focus”, of the earthquake, San Francisco experienced overwhelming devastation. Though the violent shaking lasted only 45 to 60 seconds, large fires ignited quickly due to bursting gas mains, and much of the city was soon ablaze. Moreover, initial tremors had destroyed San Francisco’s water mains, and firefighters were left with no means of putting out the conflagration. Some firefighters, untrained in the use of dynamite, accidentally ignited more buildings while trying to create firebreaks to slow the advancing flames. Additionally, many San Francisco insurers covered fire damage but not earthquake damage. This led some people to intentionally set fire to damaged properties in order to claim them on their insurance. Capt. Leonard D. Wildman of the U.S. Army Signal Corps confirmed that he was told by a fireman that “people in that neighborhood were firing their houses…they were told that they would not get their insurance on buildings damaged by the earthquake unless they were damaged by fire”.

Within a day, 225,000 of San Francisco’s 400,000 citizens were homeless. The survivors slept in tents in city parks and the Presidio, an old Army fort. They waited in long lines for food, and were required to do their cooking in the street to prevent additional fires. After the earthquake struck, the Army was quickly called in to keep the peace, guard important buildings, and assist the thousands of suffering, displaced residents. Riots and looting only added to the chaos. Consequently, San Francisco Mayor Eugene Schmitz announced that “the Federal Troops, the members of the Regular Police Force and all Special Police Officers have been authorized by me to kill any and all persons found engaged in Looting or in the Commission of Any Other Crime”.  All told, over 4,000 troops aided relief efforts during the emergency, finally withdrawing on July 1, 1906.

The San Francisco earthquake led to a number of scientific studies of the San Andreas fault, and demonstrated the damage and destruction that can accompany a major quake. Providence Academy English teacher Mr. Adam Schmalzbauer visited the city over Spring Break, and while he experience no earthquakes, literal or figurative, he was quite impressed with the Golden Gate Bridge. “That thing is amazing”, he enthused, noting its need to be both strong and flexible in order to survive such disasters. “Otherwise they’d be rebuilding the bridge every six months”, Schmalzbauer said. In fact, the bridge has only been closed three times due to weather since its opening in 1936, all due to winds in excess of 70 mph. Schmalzbauer stated that 80,000 miles of cable support the suspension bridge, enough to go around the earth more than three times.

In total, over 28,000 buildings were destroyed during the great San Francisco earthquake of 1906. Property damage – including that from fires – was estimated to have been more than $400 million, well over $10 billion in 2019. Famous author Jack London remarked, “surrender was complete”.

Following the disaster, many politicians and business leaders strongly downplayed the negative effects of the earthquake, fearing the loss of badly needed outside investment. Reconstruction was swift, and completed for the most part by 1915 in time for the 1915 Panama–Pacific International Exposition celebrating the rebuilding of the city and its “rise from the ashes”. As California governor George Pardee stated in response to the destruction, “this is not the first time that San Francisco has been destroyed by fire, I have not the slightest doubt that the City by the Golden Gate will be speedily rebuilt, and will, almost before we know it, resume her former great activity”.